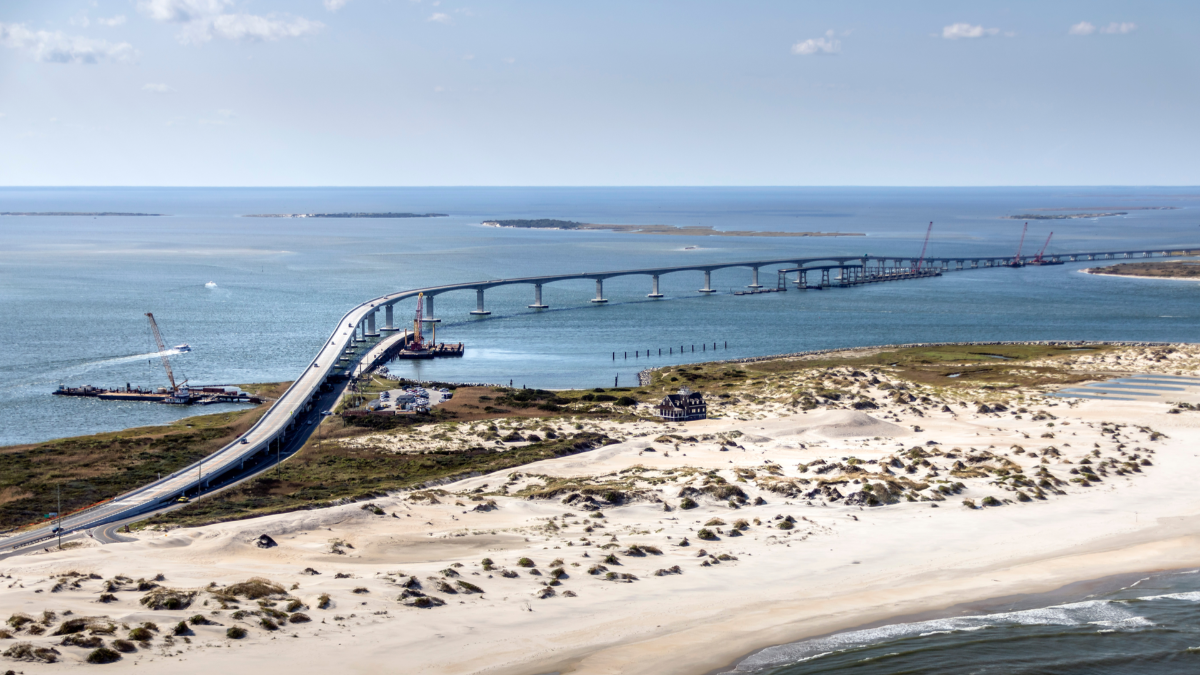 Whether you’re here for business or fun, or make your year-round home in an Outer Banks community, traveling more than a few miles through the OBX will probably involve a bridge or two.

The construction of vehicular bridges starting in the early 20th century changed the character of Northeastern North Carolina. Before then, most communities in the region were small. Access was difficult. And getting from one place to another often required a boat or a ferry ride.

Local business leaders who wanted to encourage the development of the OBX as a tourist destination initially took the lead. They began building toll bridges. Years later, the state took over bridge building and maintenance.

Now, most residents and visitors can easily travel through the region by car thanks to the bridges of the Outer Banks.

Overall, North Carolina’s Department of Transportation is responsible for about 13,500 bridges.

Three main bridges connect the OBX to North Carolina’s mainland — the Wright Memorial Bridge, the William B. Umstead Bridge, and the Virginia Dare Memorial Bridge. Keep reading to learn more about them, and several other bridges that connect OBX communities. 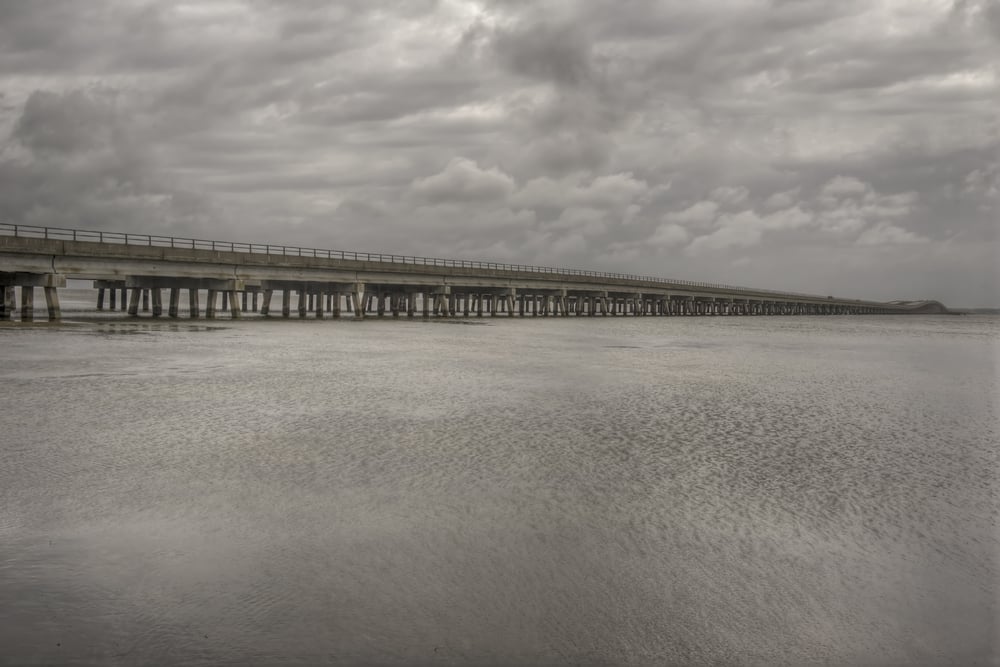 About: The first vehicle crossing of Currituck Sound dates to the 1930s. It was made of wood and resembled a beachfront boardwalk. As a result, traffic was limited to 25 mph.

In the following decades, as the Outer Banks’ popularity as a vacation destination grew, so too did traffic and the need for a more modern bridge. In 1966, the two-lane wooden bridge was replaced with a two-lane concrete bridge. About 30 years later, an additional bridge was built, and the 1960s era bridge was renovated. Today, the speed limit is 55 mph.

The twin spans, which carry US 158, often serve as a landmark for people who are arriving and departing the Outer Banks. 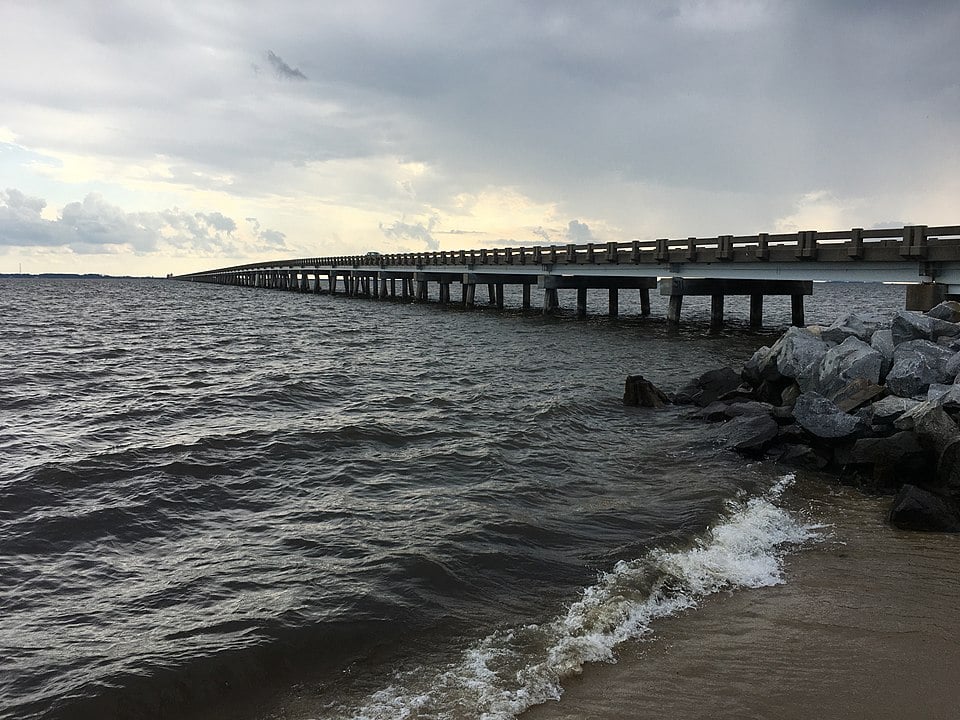 About: Before the early 20th century, traveling between Manteo, Nags Head, Kill Devil Hills, and other Outer Banks communities required a ferry ride. But as these communities grew, so did interest in improving access for residents and visitors by building bridges and improving highways.

The Umstead Bridge, now open for more than 65 years, is one result of those transportation initiatives. In recent decades, the bridge, which locals usually call the Old Manns Harbor Bridge, has gained attention for a unique quirk — it’s a regular layover spot for thousands of purple martin birds. Each summer, usually in early July, the migratory birds roost underneath the bridge.

Typically the birds fly from under the bridge at sunrise, eat insects during the day, and return to the bridge at sunset. Unfortunately, their natural pattern conflicts with residents and tourists who are out and about to get to work, run errands, or travel to and from OBX vacation destinations.

The bridge carries US 64 and has a normal speed limit of 55 mph. But when the birds are there, officials lower the speed on the bridge to 20 mph. This temporary adjustment not only protects the birds, but it also enhances driver safety, as motorists are less likely to experience a high-speed collision with birds.

Named for: Virginia Dare, the daughter of Ananias Dare and Ellinor White Dare, was the first English child born in the Americas in August 1587. The Dares were among a group of settlers who left England in May 1587 as members of an expedition led by Sir Walter Raleigh. Virginia Dare was part of the lost colony at Roanoke Island.

About: The Virginia Dare Bridge is North Carolina’s longest bridge. It’s also one of the longest concrete bridges on the East Coast. This four-lane bridge carries US 64 and the US 264 Manteo Bypass. It supplements the older two-lane William Umstead bridge. Construction took about three years and cost about $90 million. The bridge is designed to last 100 years. 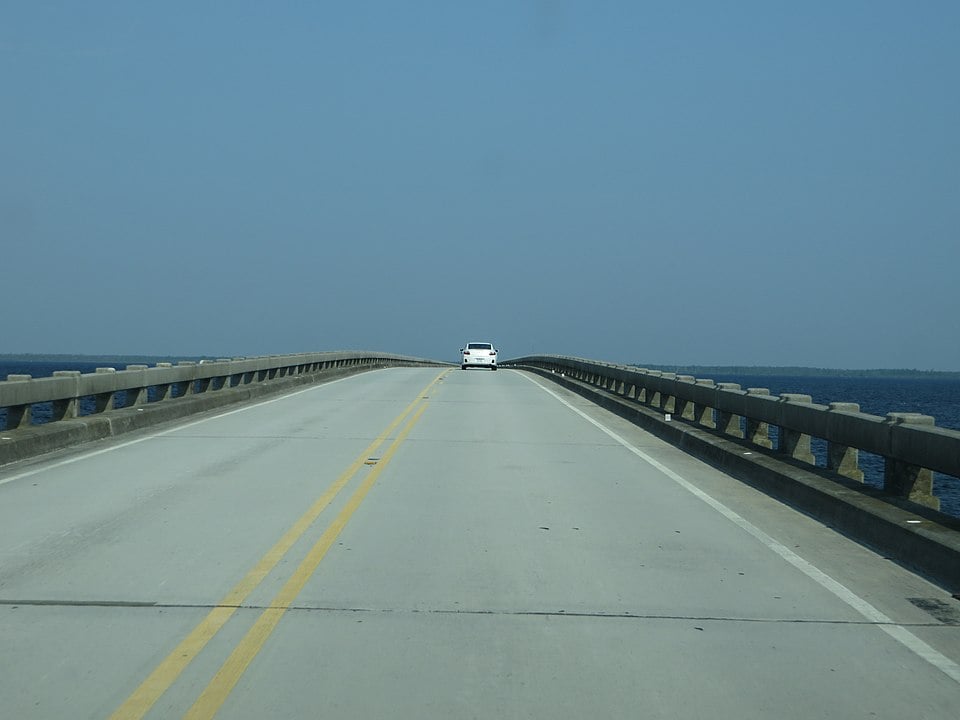 Named for: Lindsay C. Warren was a member of the US House of Representatives from 1925 until 1940. He served as comptroller general of the United States from 1940 until 1954. Warren was born in Beaufort County and studied at the University of North Carolina.

About: Also known as the Alligator River Bridge, the bridge’s design was considered innovative at the time of its construction. It includes an approximately 260 foot long moving section. However, at about 60 years old, the bridge is nearing the end of its lifespan.

North Carolina’s Department of Transportation wants to replace the bridge as part of a larger 27-mile long project to widen US 64 from Columbia in Tyrrell County to US 264 near Manns Harbor in Dare County. The bridge and US 64 serve as evacuation routes in case of hurricanes or other emergencies.

As of the fall of 2021, the new highway and bridge project remains in the planning stage. 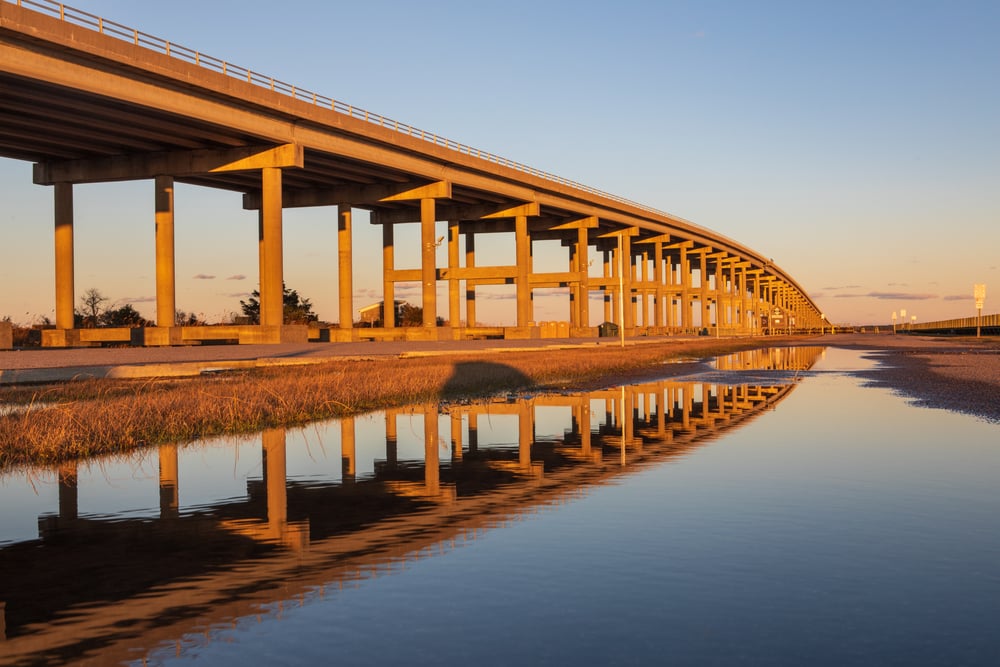 Location: US 64 over Roanoke Sound near Manteo

Named for: Washington Franklin Baum was an influential person in Dare County’s early 20th-century history. Baum was elected to the county’s board of commissioners in 1924.

About: Baum led the initiative to build the first bridge to connect Roanoke Island and Nags Head. When a replacement bridge was built in 1962 between Nags Head and Manteo, the bridge was named in his honor. That honor was again bestowed on the current bridge, which opened in 1994 to replace the 1960s era structure. 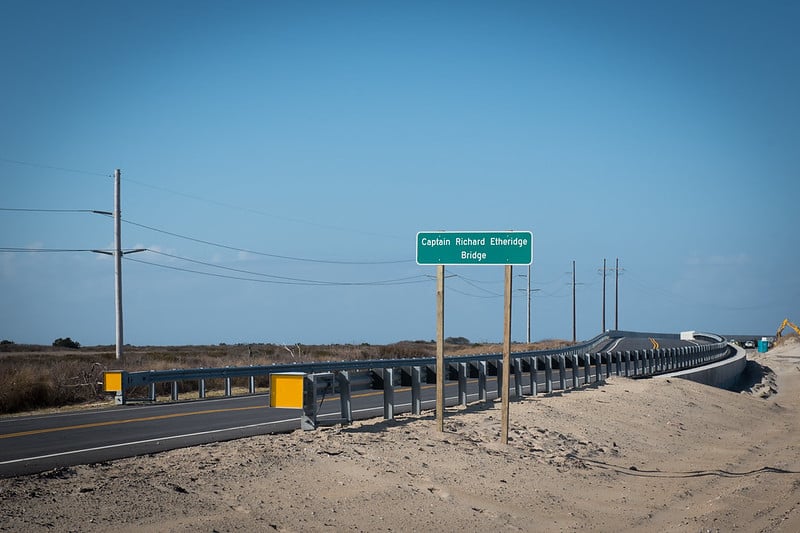 Etheridge and his crew are credited with saving hundreds of lives. Etheridge is honored with a statue in Manteo. The Coast Guard also named a Florida-based cutter after him.

About: The Capt. Richard Etheridge Bridge is a permanent replacement for a temporary bridge. Officials built the temporary bridge after Hurricane Irene breached N.C. Highway 12 in 2011.

Formerly known as the Pea Island Interim Bridge, the Etheridge Bridge opened to traffic six weeks after Hurricane Irene. The storm caused the Atlantic Ocean and Pamlico Sound to be connected by a 200-yard-wide but shallow channel. However, the natural action of wind and water eventually caused the channel to close.

Named for: State Sen. Marc Basnight represented North Carolina’s 1st District for 26 years from 1985 until 2011. His district spanned eight counties, including Currituck, Dare, and Pasquotank. At the time of his passing in late 2020, he was the state’s longest-serving senate leader.

About: Construction of the Basnight Bridge began in 2016. It replaced the 55-year-old Herbert C. Bonner Bridge. It carries N.C. Highway 12 over Oregon Inlet. It’s the first bridge in the state built from stainless reinforcing steel, according to the North Carolina Department of Transportation.

In addition, the new bridge’s longer, deeper pilings in the inlet’s floor should help prevent sand from washing away from around the piles. This design change should give the bridge a long, solid lifespan. The Basnight Bridge also has wider lanes and shoulders. The roadway is about 90 feet above the water. These design features are intended to improve safety for vehicles and marine traffic. The project cost about $250 million.

American Infrastructure Magazine named the Basnight Bridge 2020’s Bridge of the Year. The publication noted the bridge’s appealing visual design and functionality as a key hurricane evacuation route. The industry-leading publication also lauded the engineers for designing and building a bridge meant to withstand the OBX’s harsh coastal environment.

The American Society for Civil Engineers and the American Segmental Bridge Institute also honored the bridge’s design and construction process. 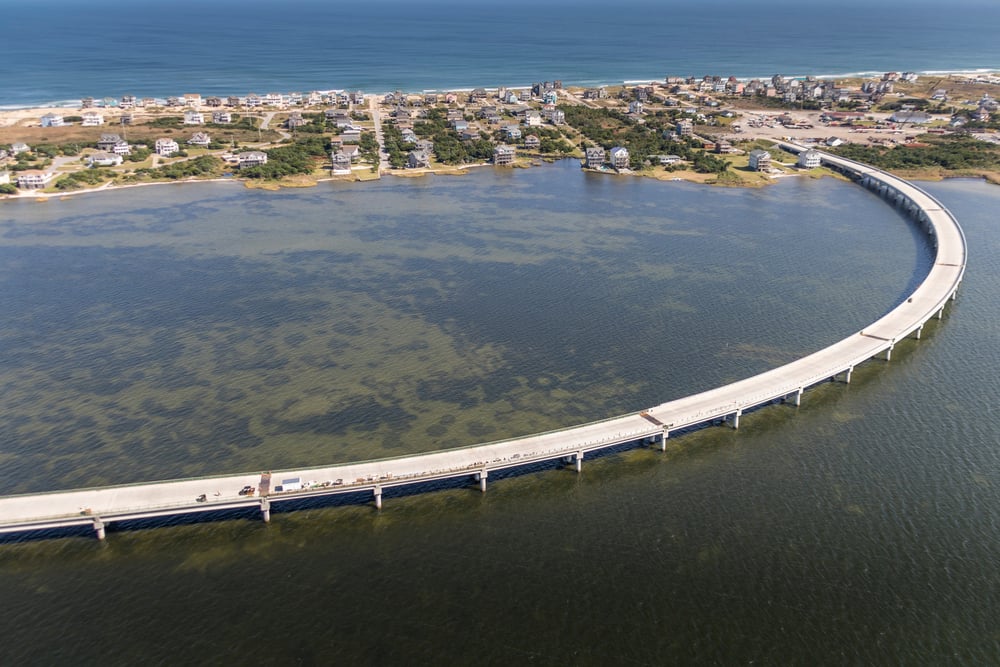 Named for: Nearby community and visual appearance

About: As a result of recurring storm-related damage to NC 12, that results in regular road closures, state transportation officials are replacing a 2 ½ mile section of the highway with a bridge. Officially, the project is known as the N.C. 12 Rodanthe Bridge. However, it’s acquired the informal name of the Jug Handle Bridge due to its appearance on a map.

When the bridge opens, the section of roadway that it bypasses will be removed instead of being allowed to deteriorate over time. That’s because the old highway occupies land managed by the U.S. Fish and Wildlife Service, which is part of the U.S. Department of the Interior. The roadway asphalt is considered environmentally incompatible with the natural habitat.

As of early September 2021, state transportation officials said construction was 88% completed. This project, along with another bridge project on N.C. 12 near Pea Island National Wildlife Refuge, are parts of phase two of the Bonner Bridge Replacement Project.

Location: Currituck County, linking Aydlett on the mainland with Corolla

Bridge type: To be determined

Opening date: To be determined — construction is set to start in 2023

The new two-lane toll bridge will create a second water crossing north of the Wright Memorial Bridge. It will have two elements. The first is a two-lane bridge that spanning the Sound connecting Currituck County’s mainland to the Outer Banks. The second part of the project will include another two-lane bridge over Maple Swamp on the Currituck County mainland. This bridge will connect Aydlett to U.S. 158.

READ MORE ABOUT THE MID-CURRITUCK BRIDGE 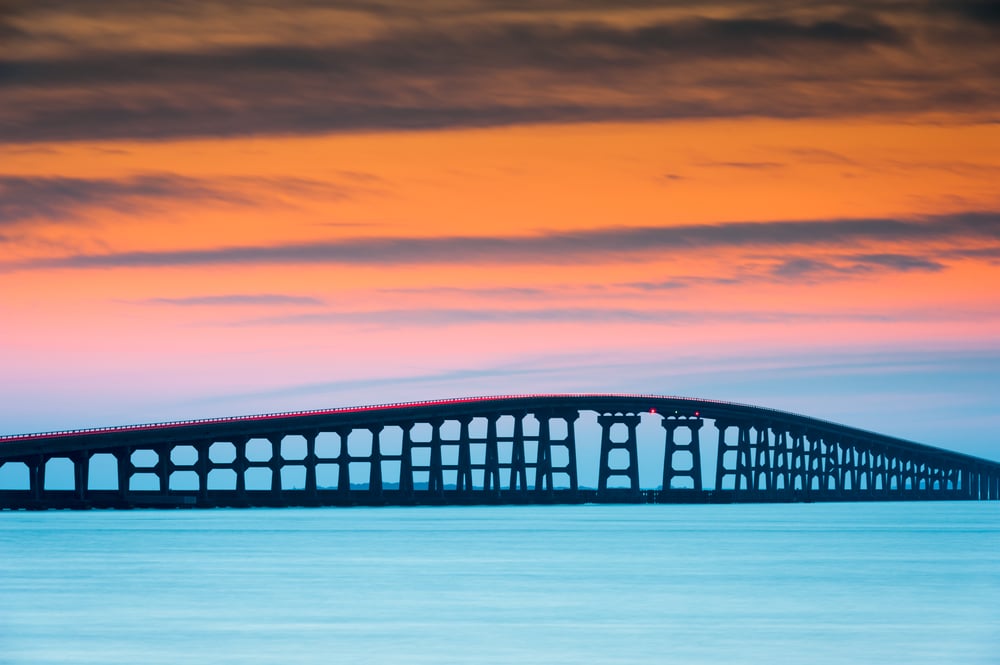 Named for: Former U.S. House of Representatives member Herbert C. Bonner. Born in 1891, Bonner, a Washington, North Carolina native, served in the House from 1940 until he died in 1965.

About: At the time of its construction, the Bonner Bridge was the only bridge connecting Hatteras Island to North Carolina’s mainland. Before this bridge was built, residents and visitors to the area relied on a ferry to cross Oregon Inlet. The bridge was located within the Cape Hatteras National Seashore.

Plans to replace the bridge began in 2011. The old bridge was designed to last 30 years. But it remained in use for about 55 years. As a result, the bridge required significant and ongoing maintenance to keep it safe and open. In May 2021, workers demolished the last main section of the Bonner Bridge with a controlled explosion.

However, a little bit of history is still standing. About 1,000 feet of the bridge’s south end was left intact. That section now serves as a fishing and recreational pier. It’s under the management of the National Park Service. Debris from the old bridge was used to create offshore reefs in coordination with the North Carolina Division of Marine Fisheries.

Previous Story
← What time is it in North Carolina? (and 20 other internet questions about the Tar Heel State)
Next Story
Made in Currituck: Calyber Boat Works →