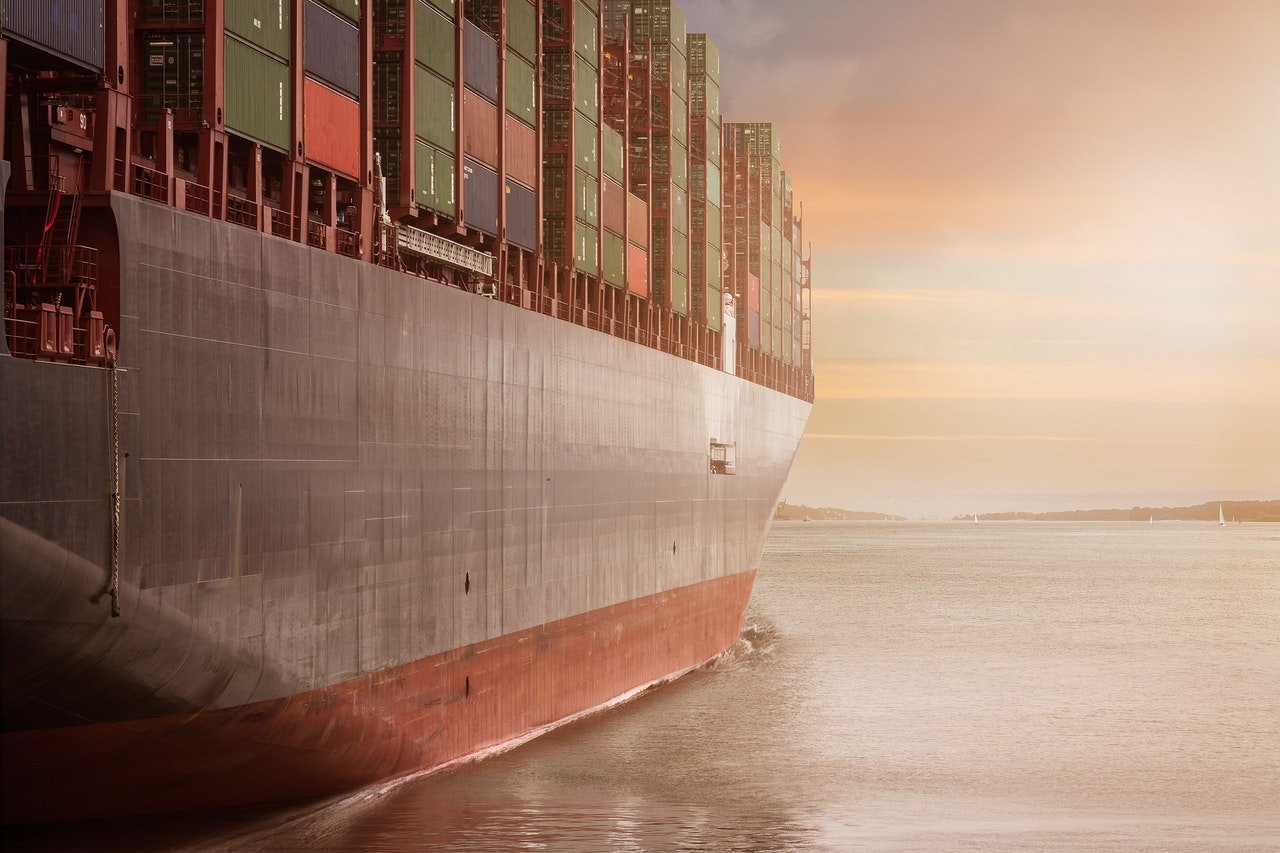 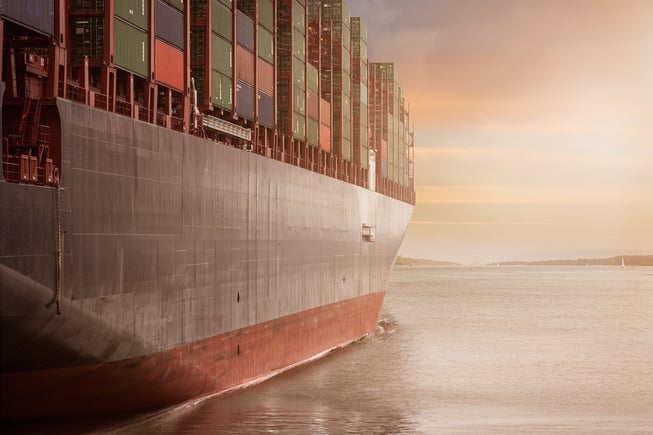 There are big changes coming to the Port of Virginia… and even bigger ships.

You’ve probably heard about plans to dredge the port’s main shipping channels to at least 55 feet. In addition to adding depth, there’s a proposal to widen the channel to 1,300 feet. This will allow the Port of Virginia to accommodate massive New Panamax container ships and speed the overall pace of commerce by allowing for two-way traffic on the waterway.

This is big news, because these proposed changes would give Hampton Roads a shipping channel that is deeper and wider than the Port of Los Angeles, the busiest port in the nation. There’s no doubt that the added depth and width will help our region keep its competitive advantage.

But the positive effects will be felt far beyond the channel’s edge. More capacity will attract more business and as the pace picks up, the support network will need to grow.

Just over the border from Chesapeake and Virginia Beach, here in Currituck County, we’re ready for what comes next.

Turning up the volume and hitting the road

In 2017, the Port of Virginia set a new record for volume by handling more than 2.84 million TEUs (Twenty Foot Containers). Roughly 150,000 of those containers moved to and/or from North Carolina. In terms of cargo, that’s like moving 2 of the biggest ships (filled to capacity)… every week!

With that much product rolling back and forth from Hampton Roads across the border, it’s more urgent than ever that key regional transportation projects move forward. At the top of the list is Interstate 87, a high-speed, unobstructed route between Norfolk and the Raleigh/Research Triangle area of North Carolina.

Interstate 87 will be a big step towards solving our “cul-de-sac” conundrum. Traffic flow has never been ideal in Hampton Roads, but we can’t just sit by and let infrastructure and geography limitations undo the Port’s progress. The more efficiently that cargo can move from ship to destination, the faster our entire region can benefit. 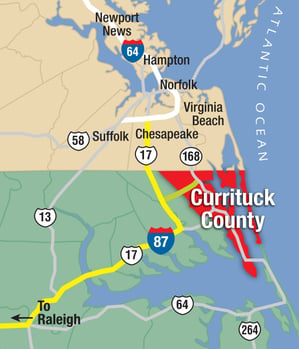 We need I-87 to become a priority for both Virginia and North Carolina, and we need it to come through Currituck County.

One proposal from the North Carolina Department of Transportation (NCDOT) has I-87 following Route 17 through Edenton and Hertford before joining Dominion Boulevard into Chesapeake, Virginia.

We prefer an alternate proposed route that creates an east-west connector through northern Currituck County. The new road would link with Virginia 168 before it becomes the Chesapeake Expressway (a connector to Interstates 64 and 464). Our belief is that the new alternate would be built closer to interstate standards than U.S. 17, and it would provide a closer route to the various port facilities.

While the reality of any finished road may be decades away, the time for discussion is now.

Not only will I-87 create a valuable connection from Hampton Roads to Raleigh, but the route will open up a world of opportunity for new companies and businesses who want to connect with the Port of Virginia… and the rest of the world.

Getting in the zone and reaching the world

Speaking of the rest of the world, another thing that Currituck County has in common with Hampton Roads are the international trade benefits of Foreign Trade Zone 20.

Late in 2016, the US Department of Commerce expanded Virginia’s Foreign Trade Zone (FTZ) to 90 miles outside of the port’s boundaries into several northeastern counties in North Carolina.

What are FTZs? The official description on the Port’s website describes them as “areas which are geographically inside the United States, but are legally considered outside its Customs territory. Companies that locate in FTZs can benefit by using special procedures to encourage U.S. activity by reducing, eliminating, or delaying duties.”

Simply put, they provide an enormous financial incentive for companies who do business overseas to locate in Hampton Roads. And now that FTZ 20 has expanded south, it gives those companies even more options.

“We are already having companies visit to explore sites in that group of counties,” said John Chaffee, President and CEO of the NCEast Alliance.

FTZ 20 is a giant leap forward. Think of it as something that’s taking the VA-NC commerce relationship to the next level. We’ve been together forever, but now things are really starting to get serious.

And clearly, the feeling is mutual.

“For many years, The Port of Virginia has been the global gateway for international trade for northeast North Carolina,” said John F. Reinhart, CEO and executive director of the Virginia Port Authority. “Major capacity expansion projects at our primary container terminals paired with the big ships already calling the port will provide these communities additional opportunities to promote those connections to the port, to the world and the benefits of the FTZ.” 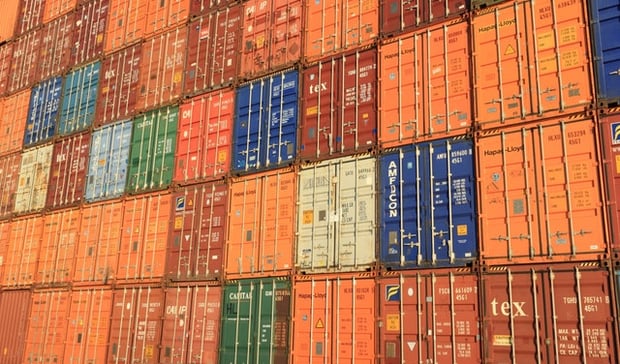 If you build logistical advantages, they will come.

Currituck County is in a unique position.

Even though we’re located in the state of North Carolina, we are considered part of the Hampton Roads Metropolitan Statistical Area (MSA). Rather than choosing sides, our take is that we offer the best of both worlds: the resources and labor pool of our Virginia neighbors and the tax benefits and pro-business policies of our home state.

We’re also perfectly positioned to support increased traffic and commerce from the Port of Virginia.

RELATED: Check out the Port of Virginia's YouTube channel

“For us, the presence of the Port of Virginia, the entire Hampton Roads network of ports, is incredibly important to our economic well-being,” said Chaffee.

“Our agriculture community depends upon these ports for export and several of our largest manufacturing employers also utilize the ports for both import and export activities,” he added. “I know Hyster-Yale (under a different name at the time) chose to locate in Greenville, NC partly because the community was roughly equidistant between the ports of Wilmington and Norfolk – a great logistical advantage.”

The more that we can capitalize on those logistical advantages, the better. And when I say “we,” I’m not just talking about Currituck County or North Carolina.

In the world of economic development, there’s lots of talk about regionalism. Political and business leaders spend years trying to come up with ways that different counties, cities and states can work together. They convene meetings and conduct studies to find out what could work, what might finally bring them together.

I suggest that we focus on what IS working today.

In terms of a regional rallying point, the answer isn’t some industry cluster. It isn’t copying what worked somewhere else in the world. And it doesn’t have anything to do with a name.

The best rallying point right now, for the entire Hampton Roads region, is building a better network for the Port of Virginia.

Success for the Port of Virginia means more than just success for Virginia and northeastern North Carolina. A smooth-running port, supported by efficient infrastructure and a robust network becomes an economic development engine for the entire mid-Atlantic region.

Isn’t it time we all got on the same boat?

NOTE: This article first appeared in Inside Business.