Corolla's Newest Commissioner Talks About Business, Politics and Progress for Currituck County and the Outer Banks

Bob White III represents District 1 on the Currituck County Board of Commissioners. He was elected in 2016 and replaced two-term board member Vance Aydlett. This is the first time White has held elected office.

Bob White grew up in Chesterfield, Virginia, served in the military police in the United States Marine Corps and worked at the Federal Reserve Bank in Richmond before moving to Corolla in 1996.

In addition to serving on the Board of Commissioners (BOC), White is the owner of Bob’s Wild Horse Tours and The Bier Box. He lives in Corolla with his wife and 10-year-old son.

As part of our "Meet Your Commissioners" series, we spoke with Bob White about his life, his work and his thoughts on the future of Currituck County.

You moved to Corolla in 1996. What brought you to Currituck?

My father built a hotel, the Inn at Corolla Light. He got talked into developing it by his realtor. He was down here for the summer and ended up staying down here.

I was working at the Federal Reserve in Richmond and he asked me if I wanted to come down and run his jet ski business. I was 26 at the time and couldn't think of anything better.

So I left my career and came down here to run jet skis for him. We worked together for a while, but I ended up taking over his hotel and running that for about 12 years.

Did you meet your wife in Currituck?

No, I imported her from Richmond. We went to high school together, but we traveled in different circles. We ran into each other years later at my buddy's 30th birthday. We started dating about a year later.

What did it take to get her to move to North Carolina?

It didn't take much. She was an executive assistant to the vice president of Anthem Healthcare. She said ‘I'd like to own an ice cream shop.’ I knew of one that was available, so I bought it.

Then I told her, “You can quit your job, I got you an ice cream shop.”

You’ve owned a lot of different businesses over the years. Where did that come from?

My dad's an entrepreneur, always has been. He started out selling durable medical equipment—oxygen supplies and stuff like that—then saw the need for home health care. He started a home health care company back in the late 70s and he really was at the forefront of that industry. 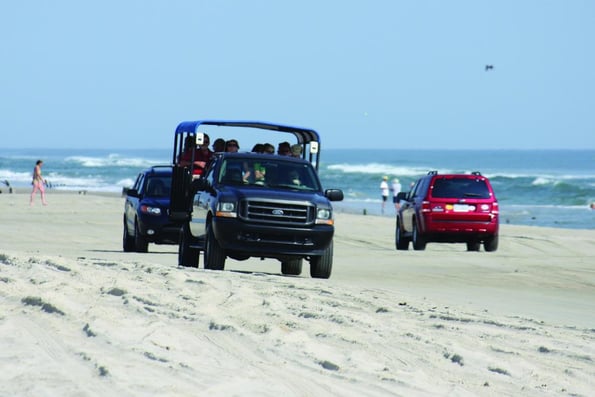 Meeting and talking to people. I’m actually an introvert, and the hospitality and tour businesses forced me to come out of that shell. I really enjoy talking to people now. People come down and they want to know my story, how I got here and why.

They think it's the coolest thing in the world to live and work here… and it is.

I live in the 4-wheel drive area in Corolla. I’ve got two stoplights. My commute is 4 miles down the beach. I'll take that over life in the city any day.

Why did you decide to get into politics?

I felt Corolla had never really been represented. In my time, we had Commissioner Ernie Bowden who lived in Carova. He was an older man—a great guy—but didn't have much of a concept of business or tourism or any of the things that make Corolla what Corolla is. He was replaced by Vance Aydlett, the commissioner that I unseated.

I wanted someone to represent Corolla who truly understood what was happening over here. I feel like I'm the only District 1 representative who’s ever been on the Board who truly understands tourism. It's what I do.

What did you want to change for Corolla?

Well, for one, we're doing a corridor cleanup study. I’ve heard so much about cleaning the corridor into Corolla. We want to make a better first impression when people come into Corolla. Improve the presence. Give visitors and residents the sense that they’ve “arrived.”

And part of that includes little things like, the sign coming into Corolla said ‘Welcome to Currituck.’ I would prefer it welcomes you to Corolla. The Bier Box brings beer for Whalehead Wednesdays at the Whalehead Club, and people would come up to me all the time and ask, “We're in Corolla right? Because the sign says Currituck.”

I got the county to change the sign. That was just a no-brainer to me.

Any issues in the rest of the county that you want to change?

Before I was elected, I felt like there wasn't enough forward thinking and planning going on. Some of that was true and some of that wasn't true. After I joined the Board of Commissioners, I realized that there’s a lot of stuff going on behind the scenes.

But generally, as a county, we don't do a good job communicating what's going on to the public. I want to see what we can do to get the public more engaged and involved.

One of the things I think the county learned during the Moyock Mega Site planning process was how to engage people. We used Facebook and really reached out to people to get them to come to meetings.

What do you think Currituck gets right in dealing with small businesses?

They're pretty easy to work with. Currituck gets a bad rap for not being business-friendly, but that's not necessarily true. You can just come here and open up a business. You don't need a business license. You don't need anything.

The tax base is amazing, it's only .48 per $100 here. If you want to open a business in Richmond or its surrounding counties, there could be three different taxes you get taxed on. You have all these tiers of taxes and the next thing you know, you're paying something like $1.50 per $100.

What do you think they could do better?

One of the things that I'd like to see happen here is a business license. Right now, Currituck doesn’t have one. Some people are scared to death of that and think, “Oh no, the revenuers are coming!” But with business licenses, the reality is we could be much more helpful.

Licenses let us know which businesses are here so we can help them out. As the Mega Site takes off, we're going to need to really understand who's doing what in Currituck and what business trends are going on in the county.

Do you feel that the pace of progress is picking up?

We are at the precipice. It's getting ready to boom. As soon as the Moyock Mega Site comes in, the mainland is going to see growth. Corolla is pretty much tapped out, so we've got to really think about business growth on the mainland.

Moyock has its own thing going on and it's rapidly becoming a town. It doesn't really have a town center yet, but we're moving forward with the Moyock Mega Site. Hopefully that will be a good thing for Currituck over the next 20-30 years. 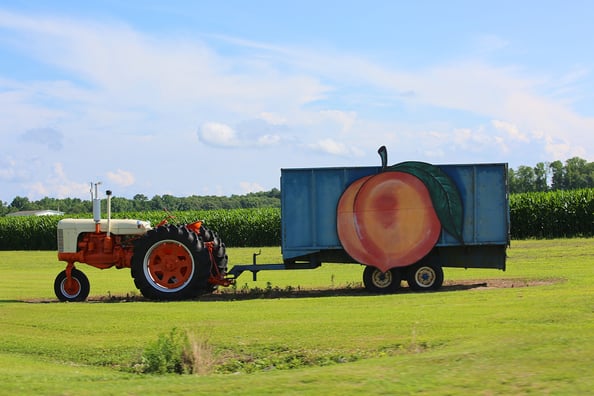 What about growth in Lower Currituck?

Lower Currituck is interesting because there's not a lot of population there, but there's a lot of business. It's almost become a service area for the Outer Banks.

A lot of businesses have relocated from Dare County over to Currituck because the land is inexpensive and the tax rate is great. Just looking at the numbers, you can see why it would be easier for them to move over the bridge.

There are also lots of farmers and agriculture in Lower Currituck. And I think it's tough for them because everybody loves the rural lifestyle… but if the kids aren't going to grow up and be farmers, what do you do? Those farms are going to go away. It's a lifestyle choice for these kids.

One of the most exciting parts about the Mega Site is its potential to attract and create jobs. There are no jobs here for our kids. When they graduate and go to college, there's nothing for them to come back to... no work.

Hopefully the Mega Site will become a catalyst for better jobs. If there are better jobs—and more of them—it could give young people a reason to come back to Currituck.

What was the biggest surprise about joining the Board of Commissioners?

The amount of work that goes into it. If anybody thinks commissioners just show up to the meetings… no… it’s much more than that.

There's a big learning curve and things are different once you start looking at them from the inside. Now I get to see why decisions are made and why commissioners vote the way they do on some things

The time commitment is probably the biggest surprise. Since I live in Corolla, everything I do takes about three hours. If I go to a ribbon cutting that's 15 minutes long? It's an hour and a half there and an hour and a half back. Automatically, that takes a half a day out of my life. It’s even more if I go to Knott’s Island, the furthest point of my district.

Are you enjoying it?

I'm enjoying it immensely. It’s a challenge. Usually when I need a new challenge, I open a new business. But the Board of Commissioners has been good. It's very rewarding when you can actually help someone out.

Is that important for you?

It's probably part of my nature to be there to help other people. That's what drew me to being an MP in the Marine Corps. I wanted to be a police officer after I got out, but ultimately I decided that it wasn't right for me. I didn't want to deal with the politics of being a police officer… and now I’m a politician. There’s a little bit of irony there.

What does success look like for you as a politician?

It’s funny, but I don't consider myself a politician. I’m here to offer my experience and help the county however I can. I'm not in this to get re-elected. I'm just here to try and do the best I can for Currituck.

And success? Ask me in four years. At this point, I've only been on the Board since December so, six months into it... I don't know enough to know yet. 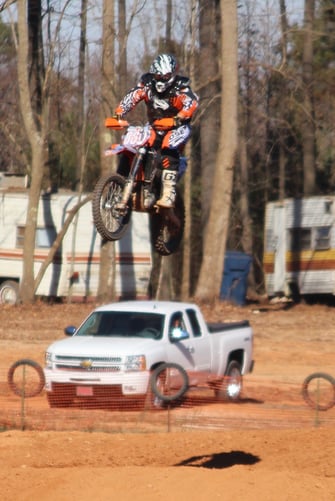 What do you do for fun?

I race dirtbikes. I like to say I'm ‘The Fastest Fat Guy on the East Coast.’

I do what they call hare scrambles, it's off-road racing through the woods. I don’t race competitively much these days but I go once in awhile for fun. I'm not about hitting those 60-foot jumps anymore.

As a sport, dirt biking has kind of a negative connotation, but it's all about family. I ride with my son. When we race on the weekends, we camp out and the kids run and play all weekend long. There's a real sense of family between everyone involved.

I miss those people when I'm not around them.

Previous Story
← Economic Development: What Quality of Life (Really) Means and How to Design It
Next Story
Ben Woody Leaves Behind a Business-Friendly Legacy in Currituck County →