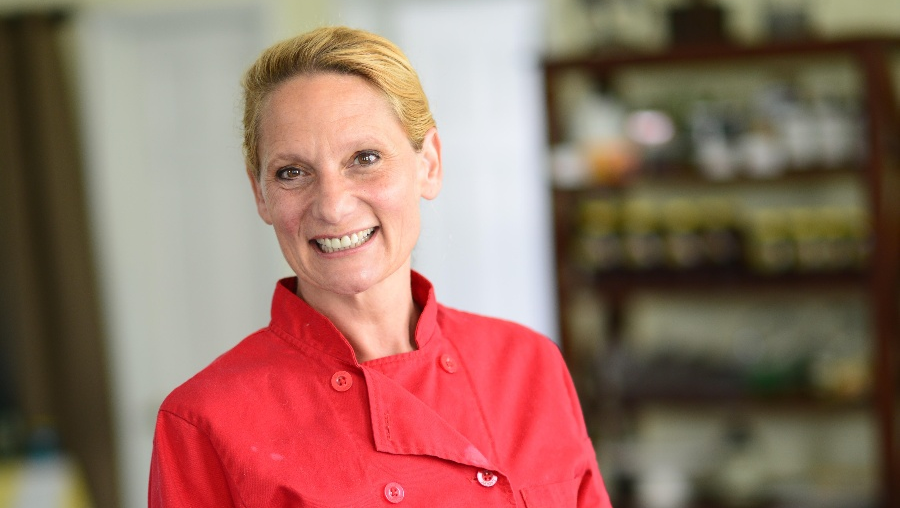 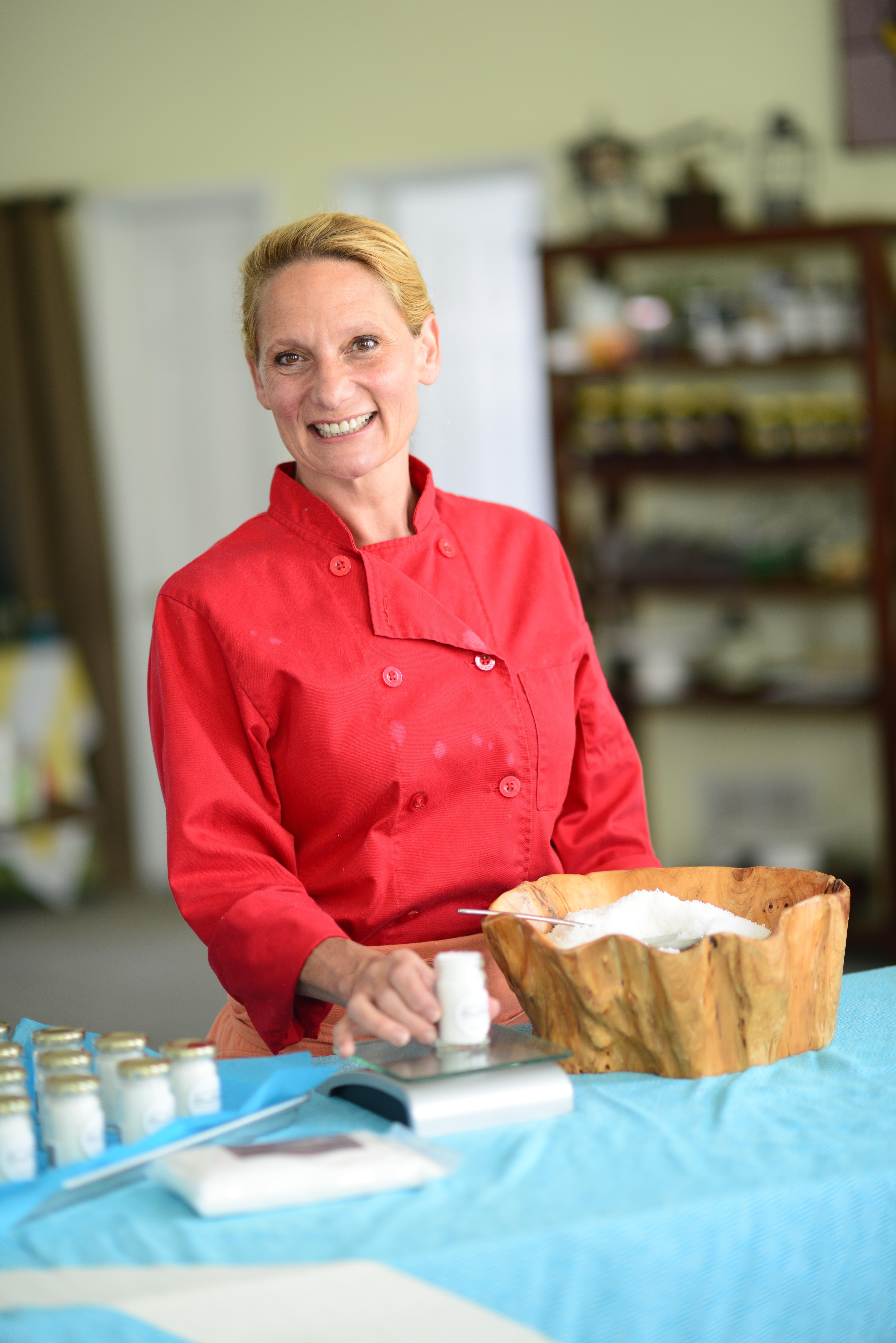 Sometimes someone asks you to pass the salt.

Sometimes someone asks you to make the salt.

Someone didn’t pass that up.

Chef Q Derks was vacationing in the Outer Banks when Amy Gaw – who started Outer Banks SeaSalt in 2009 with husband John Gaw – invited her talented friend to see her salt-making process.

The Gaws had moved the company to Currituck in 2014. Outer Banks SeaSalt is renting the Grandy historical schoolhouse, built more than a century ago, for salt production.

“I was amazed and mesmerized by the process and the beauty of the craft,” said Derks, who was born Kathleen but has not been called Kathy since she was a kid.

“The attraction to the ocean has been a constant in my life, and when it was time for a change, it just so happened that the Gaws were looking to change things up a bit, too.

“Within a month, we had half a plan, and I relocated to Currituck and became a co-owner of Outer Banks SeaSalt.”

The artisan salt maker has had a lifelong affinity for the North Carolina coast. Derks summered with her family for many years at a beach house in Duck. Her first big cooking gig was there at Barrier Island Inn (now Sunset Grill), where she started on the steam porch and after a few years became the head of the kitchen.

She had been headed in that direction all her life. 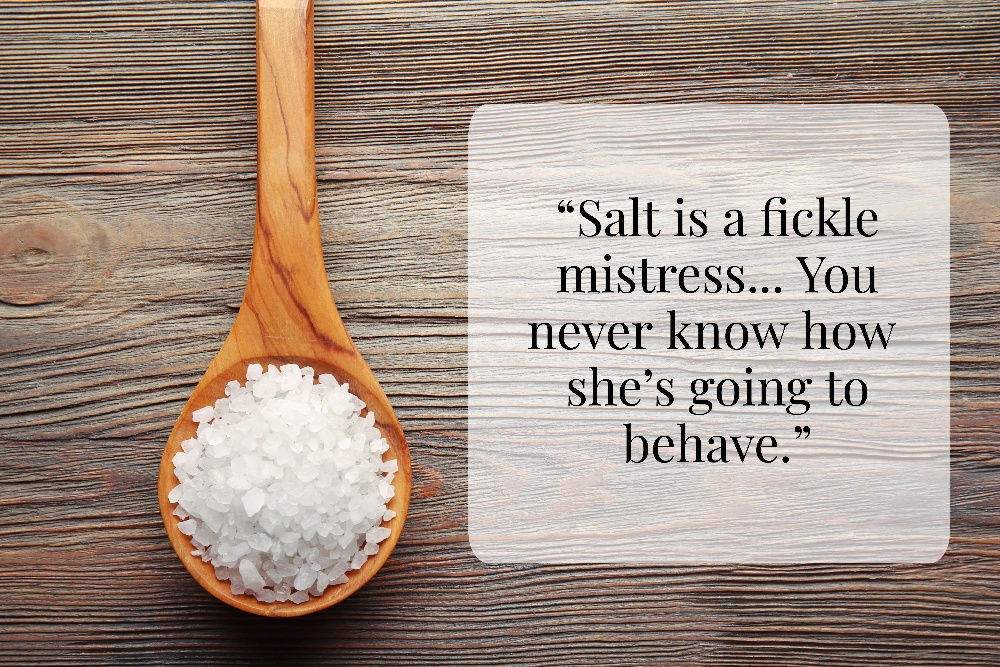 From the time Derks’ head was high enough to see over the top of the kitchen counter, she was responsible to cook dinner for her family once a week.

“My love of cooking started at home,” she said. “I have a very close family, and I am sure it is because my mother kept us all in the kitchen.”

Her favorite food memories with her family were communal ones.

“My mom would do a Chinese hot pot, and there would be bowls of all kinds of things to stick into the hot broth,” Derks said. “And more than a half dozen different kinds of homemade dipping sauces. And the rule was, if it fell, you had to leave it. When we finished doing that part of the meal, mom would put noodles into the broth, and then we would have the soup.

“The more things that dropped in the pot, the better the soup! So we would kind of try to knock other people’s things off of their skewers, in order to help with the second course. Mom would do curries that you would build at the table, too. Little bowls of all kinds of toppings. Such beloved memories of family and food!”

RELATED READ: PASS THE SALT CAFE BUILDS COMMUNITY ONE PLATE AT A TIME

For the 10 years before her move to Grandy, Derks worked in health care, feeding people healthy food “that helped them heal from the inside out.”

Derks graduated from VCU with a degree in sculpture but decided she did not want to remain a starving artist. She needed to eat and could help others eat by using her creativity in a different way.

“I found that food was also an expression of art,” she said. “So I went to culinary school in New York City at Peter Kumps’ New York School of Culinary Arts [now Institute of Culinary Education].”

While there, she worked with some of the top names in food: Jeremiah Tower, Alice Waters, Julia Child and Diane Kennedy.

Derks’ career as a chef started at a little restaurant called Puzzles in Richmond, Virginia. She then spent 13 years in that city as executive chef of the museum district restaurant Avalon.

“My dishes were novel, and folks noticed,” Derks said. “I loved playing with food then, and I do now.”

Her family still cooks together every chance they get.

“Since my move, they have come here [to Currituck County], and we have cooked together a few times, and I have returned a few times,” Derks said. “So even with the distance, we still make an effort to keep this up.”

So what is her favorite thing to cook?

“I love cooking all kinds of food, but I would have to say that my favorite thing to cook is somebody’s grandmother’s recipe,” Derks said. “I love authentic, particularly spicy, foods that someone from that country has taught me to cook – recipes handed down for generations. I’ve had this experience with African cassava leaf, Jamaican jerk and even some Thai curries. I am a chili head.”

Now she wraps her head around making Outer Banks SeaSalt.

The process begins at the ocean. Derks said the company pulls ocean water from the Kitty Hawk area and transports it to Grandy.

“After we have the water, we reduce it to high salinity,” she said. “Then the process of convincing the crystals to bloom comes. We lightly steam, and let rest, lightly steam and let rest. And repeat until the magic happens. Beautiful crystals start to appear! Then they rest more till beautiful little inverted pyramids form. Then they are drained and dried and packaged.”

According to Derks, it’s simple … but not easy.

“Salt is a fickle mistress,” she said. “You never know how she’s going to behave.”

And where can she – the Outer Banks SeaSalt variety – be found? All over North Carolina, including Grandy Greenhouse in Currituck County.

So how is Derks liking it here?

“I love Currituck County,” she said. “I am intrigued by the Algonquin history, deep southern history and the history of the neighboring barrier islands.”

Amy Gaw authored the book “Lost Restaurants of the Outer Banks and Their Recipes.”

“It is so inspiring to work with her!” Derks said. “She has learned so much about the history here, and when she shares her findings and stories, I get completely engrossed.

When not making SeaSalt or playing in the sand, Derks makes instructional cooking and craft cocktail videos @chefqwhatsfordinner on Instagram.