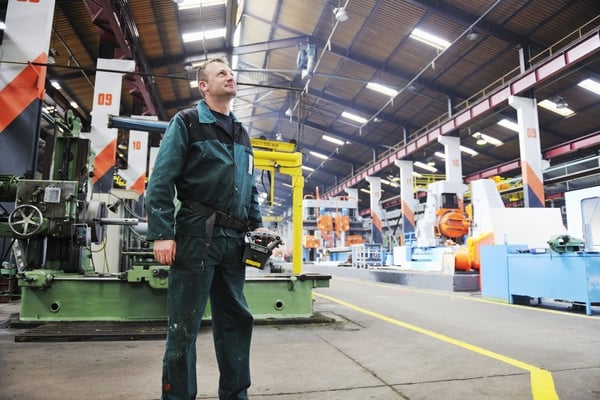 College of the Albemarle is building a foundation in trade education to grow a skilled workforce, create a talent pipeline and attract world-class advanced manufacturing companies to Northeastern North Carolina

Simply put, manufacturing is the art of turning raw material into finished product.

But there isn’t much these days that’s simple about modern manufacturing. Over the past 50 years, the ways we “make stuff” has evolved. Technology has taken over, robots and computers have joined the party and manufacturing processes have become much more complicated.

We’re also making more stuff than we are making people who know how to make that stuff. As older generations of workers retire from manufacturing, there are fewer young people ready to replace them. That’s created something called a “skills gap.”

And while that gap may have started out small like a backyard sinkhole, it’s grown over the years to Grand Canyon proportions. One study estimated that, in 10 years, there will be 2 million advanced manufacturing positions without qualified people to fill them. Two million jobs left empty.

Some experts claim that those numbers are too high, but others are warning that American manufacturing is a runaway locomotive headed for a cliff.

“Everybody wants to blame everybody else but it's kind of a systemic problem in manufacturing,” said David Chambers, an instructor and program coordinator of Computer Integrated Machining at College of the Albemarle (COA). “The skills gap has widened over time and we've gotten to the point where it’s the largest hindrance to manufacturing in the United States.”

“It’s a bigger issue than competition from other countries,” he added. “No one in America can find skilled people to do the work.”

I’ll admit that I was worried too, until I discovered that Currituck County has a secret weapon for closing that skills gap… one job at a time.

Take a tour behind the scenes

The COA’s Regional Aviation & Technical Training Center (RATTC) in Barco is where tomorrow’s advanced manufacturers are made. Think of it as a place that manufactures manufacturers.

The good news is that what they’re doing is working. But they need more people to know about it. They need more momentum in the program.

They need help building the future workforce for Currituck County.

But as dean of COA’s Business, Industry and Applied Technologies programs, she has solid proof that manufacturing does exist. Every year, her programs introduce students to the ever-changing world of advanced manufacturing. And every year, she sends engineers, welders, drafters, mechanics and machinists out into the world to make stuff that matters.

It’s a world that greets them with open arms and a steady paycheck.

“For every student who comes out of my machining program, I probably have at least one if not two jobs out there for them,” Waters said. “Companies will contact us and sometimes I have to tell them that all of our students are currently hired.”

You can get a closer look on Friday October 6th, when COA will host their 4th Annual Advanced Manufacturing Event. To celebrate National Manufacturing Day (MFG Day) they will open the doors of the Regional Aviation & Technical Training Center to hundreds of curious students, parents and members of the general public. 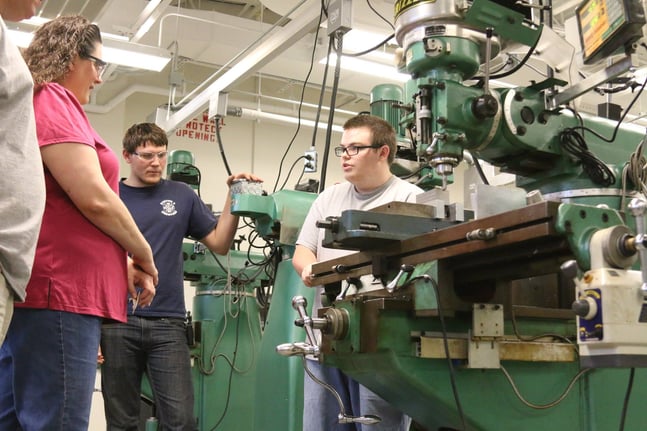 The one-day event will offer a peek at what goes on behind closed doors and underneath those oversized welding masks. Visitors will get to see hands-on demonstrations, ask questions and learn more about the world of designing, building and fixing the stuff that we depend on every day.

“Just come in with an open mind and understand that real opportunities are out there,” Chambers said. “Students who come to this event will leave knowing more about manufacturing than 95% of the general population.”

That’s because, when it comes to knowledge about manufacturing jobs, most of the general population are still stuck in the past.

Joe Gopi wants you to forget what you think you know about manufacturing.

Gopi is the manufacturing manager for the Sumitomo Drive Technologies' facility in Chesapeake, Virginia. The multi-national company, based in Japan, makes devices that help control the speed of heavy machinery at factories and public facilities.

“People think all good manufacturing jobs have gone away and that human beings have been completely replaced by robots,” Gopi said. “ But that's just not the case.”

Some of those great manufacturing jobs are actually working alongside Gopi at Sumitomo. Over the years, he’s found plenty of new hires from Currituck County and actually considers the COA machining program his “local machining pipeline.”

“We're not just thinking of hiring people and stopping there, we have created a development plan for them to continually gain more skills and go higher in manufacturing,” Gopi said. “This is going to be a lifelong trade, not just a job. Here's some evidence of that: In 2006, Sumitomo’s Chesapeake machine shop had only 2 shifts with 15-20 people total; today, we have 3 shifts with more than 45 precision machining & welding professionals. To support that, we have also grown our maintenance staff from 2 to 6, and manufacturing engineering functions from 2 to 7.”

But Sumitomo isn’t the only game in the region. Throughout Hampton Roads, there are major manufacturers such as Flowserve, Stihl, Busch Manufacturing and Bauer Compressors, not to mention the well-established ship building industry in the region. Each one has a need for skilled advanced manufacturing employees.

But if Gopi wants to get skilled workers to come out of the College of the Albemarle program, he knows he needs to get them into the program first. It’s not necessarily part of his job description, but he’s more than happy to visit a class at Currituck County High School to knock down myths and change people’s minds about manufacturing. 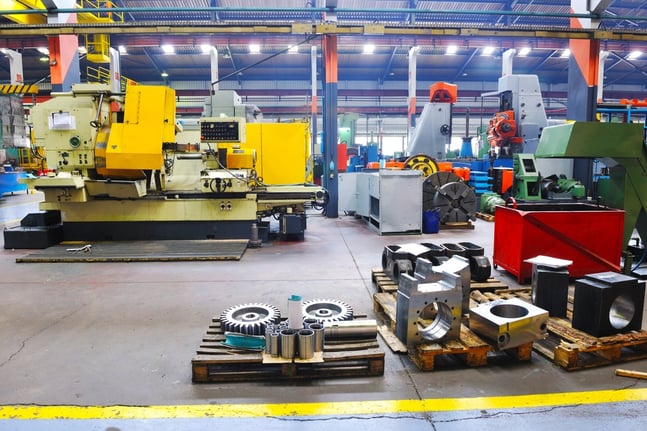 Modern manufacturing is not monotonous, dingy or depressing.

Today's high-tech manufacturing spaces are cleaner and quieter than in the past and workers share the floor with high-performance, precision computers and advanced robotics. These days, it looks more like the space-age than the industrial revolution.

“One misconception about manufacturing is that people think that there's no money in it,” Gopi said.

Not true. The looming gap is proof that there’s a growing shortage of skilled labor. That means professionally trained workers are in demand and can command more competitive salaries.

Gopi created a chart that compares the income and expenses of a four-year degree with a two-year trade school. According to his graphic, after about 9 years, a trade school grad can be enjoying a new car, a new house and a great salary just as the four-year grad first emerges from debt. 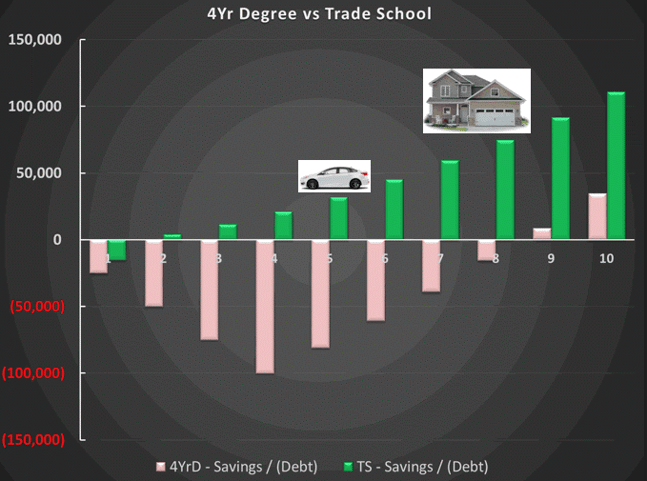 Entry-level manufacturing jobs — right out of a training program like College of the Albemarle — can start around $36,000 per year and that salary only grows with added skills and experience. According to the National Association of Manufacturers, in 2015, manufacturing jobs paid an average of $81,289 (including benefits).

“Our seasoned machinists make pretty much the same as some of our seasoned engineers,” Gopi said. “At the beginning there’s a difference in pay, but if you look at the curve of how their salaries grow... a good machinist or welder or maintenance technician can close that gap very quickly.”

It doesn’t hurt that candidates also get more opportunities to join companies as paid apprentices. That means they get paid while they are learning new skills, versus accruing years of student debt by learning in a classroom.

“We've got to change our mentality on the process of education; we should start looking at the return on investment,” Gopi said. “We have to think of education as an investment, because that’s exactly what it is. It's an investment of your time and money. If your education does not increase your probablity of being employed right away with pay and benefits commensurate to that investment, you may end up with massive student loans and lifelong debt.” 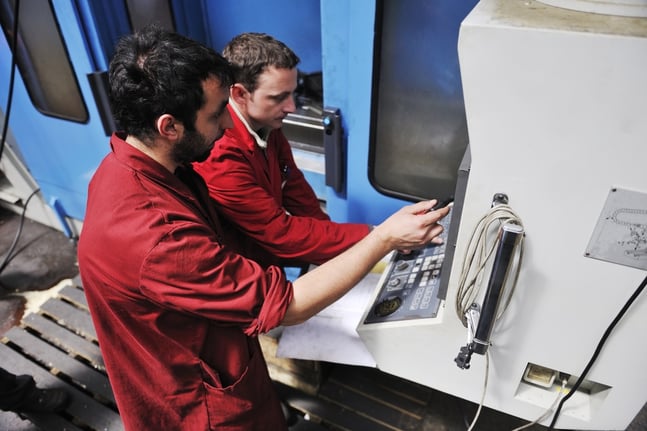 MYTH: Manufacturing jobs are not careers

One of the big challenges for educators and employers is lifting manufacturing jobs out of their “second-class” status. For years, the “trades” have been seen as a backup plan for people who don’t (or can’t) enroll in a 4-year college.

Some rank trade jobs on the same level as low-skilled, hourly retail or foodservice jobs. That, according to Gopi, is a big mistake.

“Look, I get it… not everybody wants to go to college,” Gopi said. “But I just think that a lot of kids tend to settle for less than what they could accomplish.”

There are manufacturing and trade jobs in almost any field you can think of from the Navy and NASCAR to watersports, biomedicine and intergalactic travel.

“For a machinist, once you understand the tolerances and machine tools, it won't matter whether the part you make goes on a lawnmower or a spacecraft,” Chambers said.

Technologies such as 3D printers, robotics and cutting-edge composite materials are also making it easier than ever for skilled manufacturers to become innovators and entrepreneurs.

But Gopi knows that changing our manufacturing mindset isn’t going to be easy. If our country wants to fill the jobs that need to be filled, we need to change our educational system's relationship with work.

The key is to start early. Very early.

“I just came back from a trip to our parent company in Japan,” he said. “I was touring one of their factories and there were letters of appreciation from the last tour they did with the local elementary school. Elementary school. That's how intentional they are about keeping their manufacturing going.”

“If you really want to push the manufacturing agenda, instead of just lamenting the skills gap problem, manufacturers have to become more involved. We should educate the educators on what the industry’s needs are, and how those needs translate to great opportunities for the students …. Industry cannot wait for someone else to do that for them.”

“This type of insight would also positively change our children’s perception of the value of work in general, before it becomes too late to change behavior.” 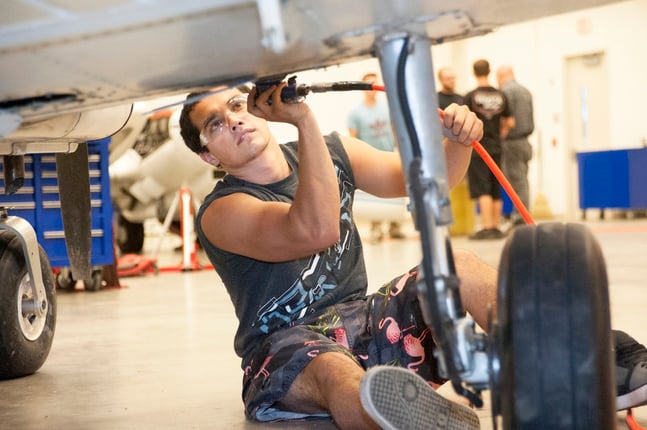 The shift from exporting to attracting

“It's really about creating the pipeline for future employees for these companies,” Waters said. “If we can't provide them a pipeline, those companies won't exist around here.”

The COA has already created a strong connection between education and the regional economy. And the school’s advanced manufacturing programs are seen as exporters of great employees.

But how can we keep those employees here in Currituck County?

First step is to maintain the momentum. Labor is one of the most urgent concerns for companies looking to relocate or expand. A more capable workforce can act as the ultimate attractor for future industry growth in Currituck.

We can work together to change the way we all think about manufacturing, we can start the conversation early with younger students and help the rising generation of American makers connect with what’s really possible in the industry.

To misquote a great movie, “If we have the people who can build it, they will come.”

Previous Story
← Why the Smartest Hampton Roads Businesses are Heading South of the Border
Next Story
Paul Beaumont: Taking the Long View in Currituck County →

These Stories on Manufacturing