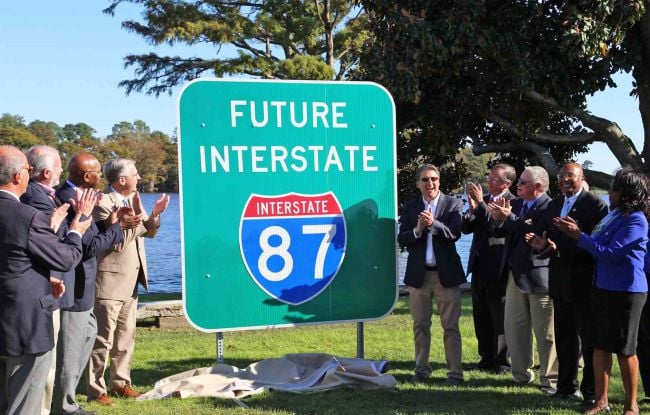 Since northeastern N.C. does not currently have an interstate highway, I-87 would serve as an obstruction-free route for the region and provide direct access to Hampton Roads.

Raleigh (I-40) and Hampton Roads (I-64) are two of the largest cities on the East Coast currently served by only one Interstate.

An unusually strong and united coalition is in support of the Interstate 87 project, including bipartisan agreement of federal legislators from North Carolina and Virginia, regional chambers of commerce and economic development councils, local lawmakers and other community groups.

This prompted Theresa Pinto, president of the Rocky Mount Area Chamber of Commerce, to recently remark, “Collaboration between all counties from Nash to Currituck; working with Virginia DOT and our elected representatives in Washington, D.C., I believe is a first of its kind in North Carolina.”

Recently, the U.S. House and Senate approved a $305 billion transportation bill that included a measure to designate U.S. Route 64 from Raleigh, through Rocky Mount, Williamston and Elizabeth City, to U.S. Route 17 in Norfolk as a “high priority corridor.”

The designation is the first step toward securing federal funds to assist states in upgrading highways to federal interstates. The legislation will now be sent to President Obama, who is expected to sign it into law.

What an I-87 can do for our region

Today’s Hampton Roads can be described as a transportation cul-de-sac. After goods are delivered or picked up, drivers have to turn around and go back the way they came.

The new Interstate 87 provides a freeway to the South, capitalizing on the fertile economic development ground in one of the nation’s best places to do business: North Carolina.

This freeway would open the distribution channels in the mid-Atlantic region like never before.

Interstate 87 would link the intellectual and health care industries of Raleigh, the fourth-fastest growing city in America according to Forbes, to the deepest port on the eastern seaboard, the Port of Virginia in Norfolk, and every business along the interstate stands to gain as a result.

Interstate 87 would strengthen the ability of Hampton Roads businesses to move goods from roads to sea, and vice versa. This highway connects two key centers of commerce in the Southeast, literally paving the way for high speed and high volume transport of goods from our region’s businesses to consumers all over the world.

In 2016, we commemorated the 60th anniversary of the landmark Federal Aid-Highway Act, which established the high-quality interstate highways that tied the nation together like never before.

While we know that Interstate 87 is perhaps two decades from becoming a reality, this project meets the intent of the architect of the modern interstate system, Dwight D. Eisenhower: safe, easy transport of passengers and goods.

Our region will flourish with a new Interstate 87.

Editor's Note: This article originally appeared in Inside Business.

These Stories on Transportation