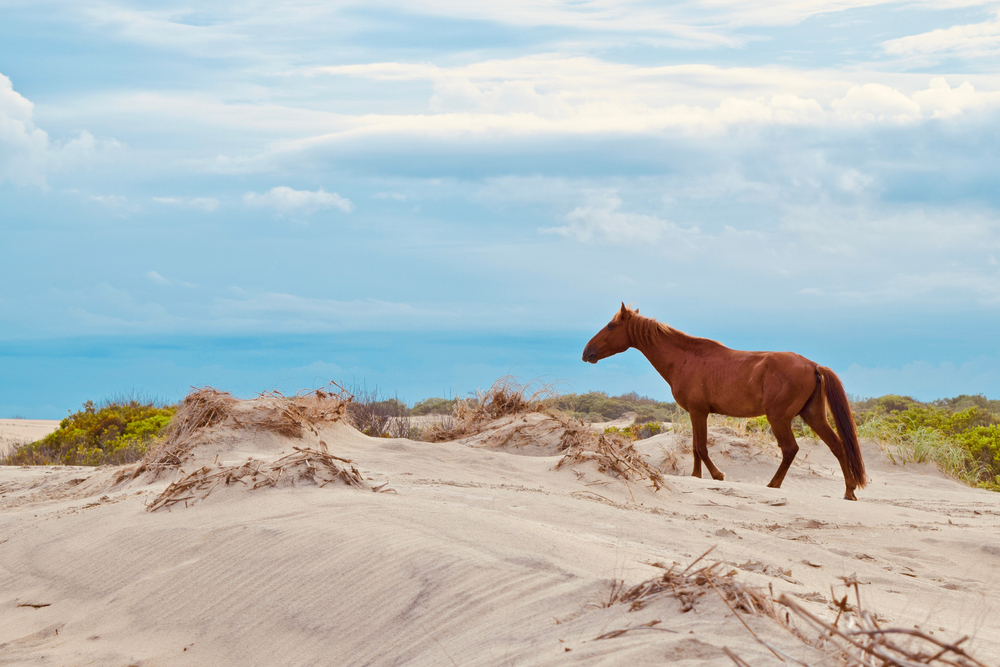 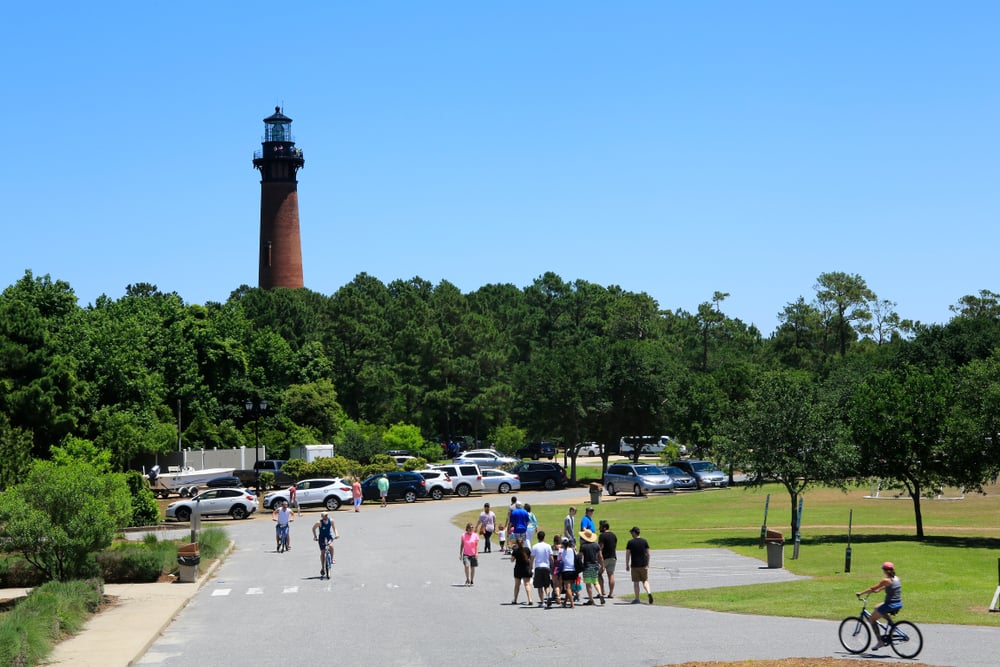 Corolla was a quiet, isolated Outer Banks village for centuries after Europeans arrived in the Carolinas.

Located about 90 minutes east of Elizabeth City and 106 miles from the Virginia Beach oceanfront, Corolla is an unincorporated community. That means there’s no elected mayor or town council. It lies within Currituck County, which has an overall population of nearly 30,000.

To get from points north to Corolla by car, owing to Northeast North Carolina’s unique coastal landscape, you’ll have to take a nearly 70 miles long, U-shaped route that goes south, then east , and then due north on North Carolina Highway 12 to reach this Outer Banks community.

Like many communities throughout North Carolina and the United States, the exact circumstances and timing of Corolla’s establishment are lost to history. What is known, however, is that few European settlers lived in this area until the mid-1800s. Around that time, a handful of isolated communities existed along the county’s northern banks. Formerly known as Jones’s Beach, Whalehead, and Currituck Beach, the community known today as Corolla is the only one from that era that still exists today.

The postal service required residents to submit suggestions for a new name. Corolla, the inner part of a flower petal, was among the submissions. The postal service went with it. The pronunciation of the community (Cor-RAH-la) is distinctly different than the longstanding Toyota sedan that bears the same name.

One of the community’s earliest growth spurts accompanied the construction of the Currituck Beach Lighthouse. Construction of the light began in 1873. Its inaugural lighting was Dec. 5, 1875. Its presence drew lighthouse keepers and their families to the community. Although the Currituck Light was automated in the 1930s, it’s still a functioning aid to maritime navigation today, nearly 150 years later. So too did the establishment of a life saving station.

By 1895, the village was busy enough to have its own post office. However, the community’s growth waned in the mid-20th century. Residents moved to other parts of the region to pursue employment. Not long after the time electricity was widely available in the area in the mid-1950s, Corolla was nearly abandoned for a time — the church and school stood empty.

But in the 1980s, when the state took over control of NC 12, the only road into the community, development exploded. The village grew from dozens of homes to thousands. Business growth surged too. Today, about 500 people live in Corolla year-round. During the summer tourism season though, the population swells with thousands of season residents and daily visitors. 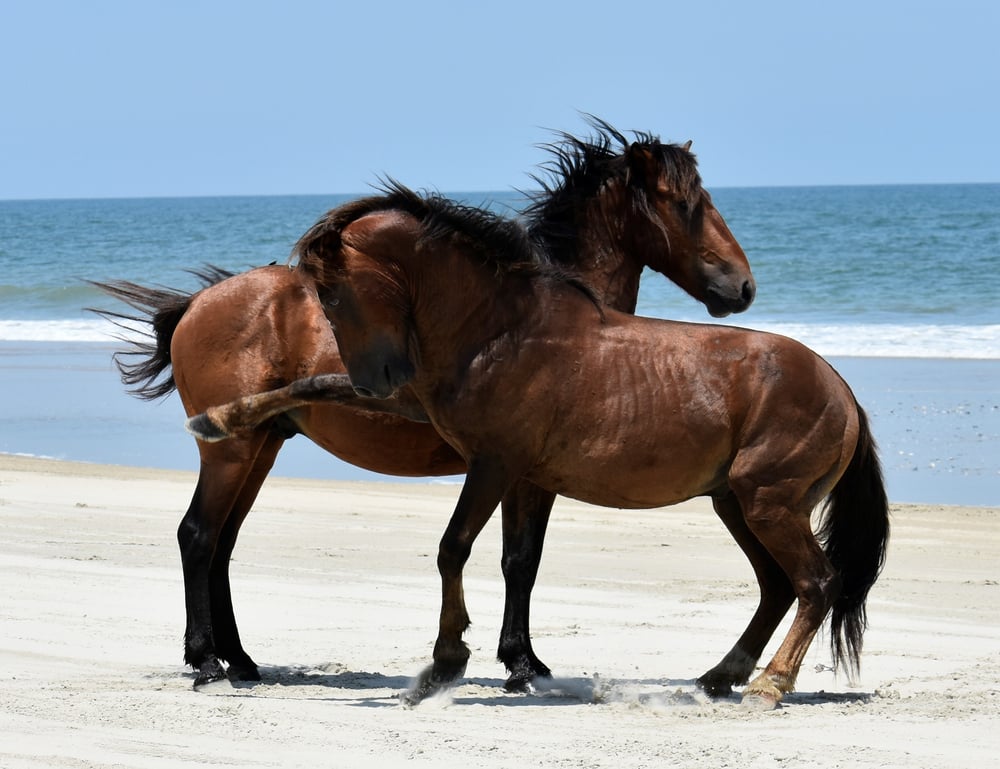 Corolla’s wild horses on the northern Outer Banks are one of the region’s most popular attractions.

Like the human residents of the community, it’s unclear exactly how the horses came to be in the area. However, they have a documented history going back hundreds of years. Some historians say the horses’ presence dates to 1521 when Spanish explorers arrived in the area. However, the Spaniards came into conflict with the area’s resident Native Americans. The Spanish fled the area, leaving their settlements and livestock behind, Others say the animals are survivors of shipwrecks that claimed lives and numerous vessels along the notoriously treacherous OBX coastline.

Today, the nonprofit charity the Corolla Wild Horse Fund manages the herd’s health and safety. The group was formed in response to a long string of horse versus vehicle accidents over more than a decade. The crashes were due to increased development and traffic following the opening of a formerly private NC 12 highway between Duck and Corolla. The group employs a full-time staff member who is available 24/7 to respond to any emergency issues involving these feral animals.

Many businesses offer guided wild horse tours. Guests ride in SUVs that are specially equipped to drive on the beach. By doing this, guests may get a more up-close horse experience that is still safe for all involved. Visitors can also plan their own self-guided wild horse tours. However, if you go on your own in search of the horses, be aware that they usually stay in areas that are only accessible via a four-wheel-drive vehicle or possibly via a strenuous beach hike.

Horses also sometimes enter or pass through Corolla-area residential neighborhoods. Regardless of how you encounter them, be respectful of these wild creatures. Stay 50 feet away from the horses at all times. Do not feed them. Local, state, and federal laws protect the horses.

DON'T FORGET! PARKING PERMITS ARE REQUIRED FOR DRIVING ON THE BEACH IN COROLLA. READ ABOUT THEM HERE. 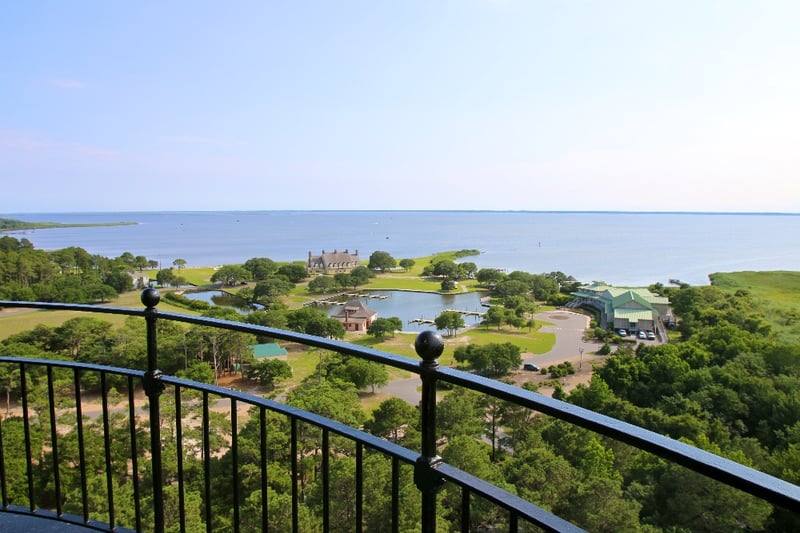 Things to Do in Corolla

Attractions in and around Corolla include the Currituck Beach Lighthouse and the Whalehead Club.

The lighthouse is the northernmost in the Outer Banks. Its brick isn’t painted, in contrast with two other well-known OBX lighthouses, Bodie Island and Cape Hatteras, which both have distinctive black and white color schemes to make them more visible and distinguishable during daylight. Visitors can climb the 162-foot tall tower for a fee by taking 220 stairs to the top.

Climbers are rewarded with expansive views of the Atlantic Ocean, Currituck Sound, and the northern Outer Banks. This guiding light is still in service as an active aid to maritime navigation. Its beam can be seen about 20 miles away. The former lighthouse keepers house is also on the premises. 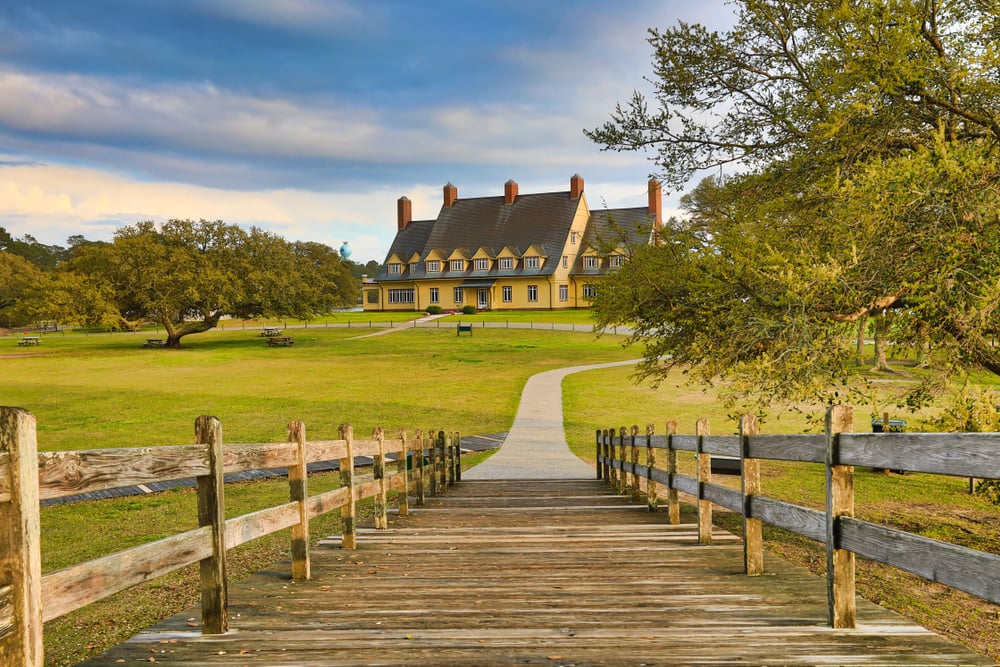 Whalehead is a restored 1920s-era home that is open to the public for tours year round. This 21,000 square foot mansion is listed on the National Register of Historic Places. It features original Tiffany lighting fixtures, cork flooring, and a Steinway piano. The five-story home also had the first elevator in the Outer Banks, along with electricity, hot and cold running water, and a refrigerator. Back then, these basic amenities were luxuries.

Edward C. Knight Jr., a wealthy industrialist who also considered himself a conservationist, transformed the former Lighthouse Hunt Club into Whalehead. His wife, Marie Bonat Knight, shared her husband’s enjoyment and passion for waterfowl hunting. However, the cultural norms of the time prevented her from participating in any hunt club activities, which were exclusively for men. So Edward Knight built the home for his wife.

Today, the home is used primarily as a wedding and event venue. Although no documented murders or violent crimes occurred at Whalehead, some people still insist it’s a focal point of paranormal or ghost-related activity. Whalehead capitalizes on this by offering ghost tours. Some people cite the region’s long history of lost colonial settlements, conflicts with the Native American population, and numerous shipwrecks as reasons why paranormal activity might be present. The Knights themselves may have been disturbed by spirits. In 1933, they left the home without explanation and never returned.

Whalehead and the Currituck Light are close to Historic Corolla Park, which is free and open to the public. The park’s green space is ideal for walking and biking. Also nearby is the Outer Banks Center for Wildlife Education. The center offers exhibits and programs about coastal North Carolina’s natural history, heritage, and wildlife. And to the north is Currituck National Wildlife Refuge. The refuge offers wildlife photography opportunities, along with views and access to barrier islands, sand dunes, and maritime forests.

Visitors also can experience a supersized take on the traditional playground at the Corolla Adventure Park. The describes its signature attraction as “a giant jungle gym made of rope and wood in the sky” that is designed for nearly all ages. It has a variety of obstacles and courses “ranging from beginner to ninja warrior levels” along with an 80-foot zip line. 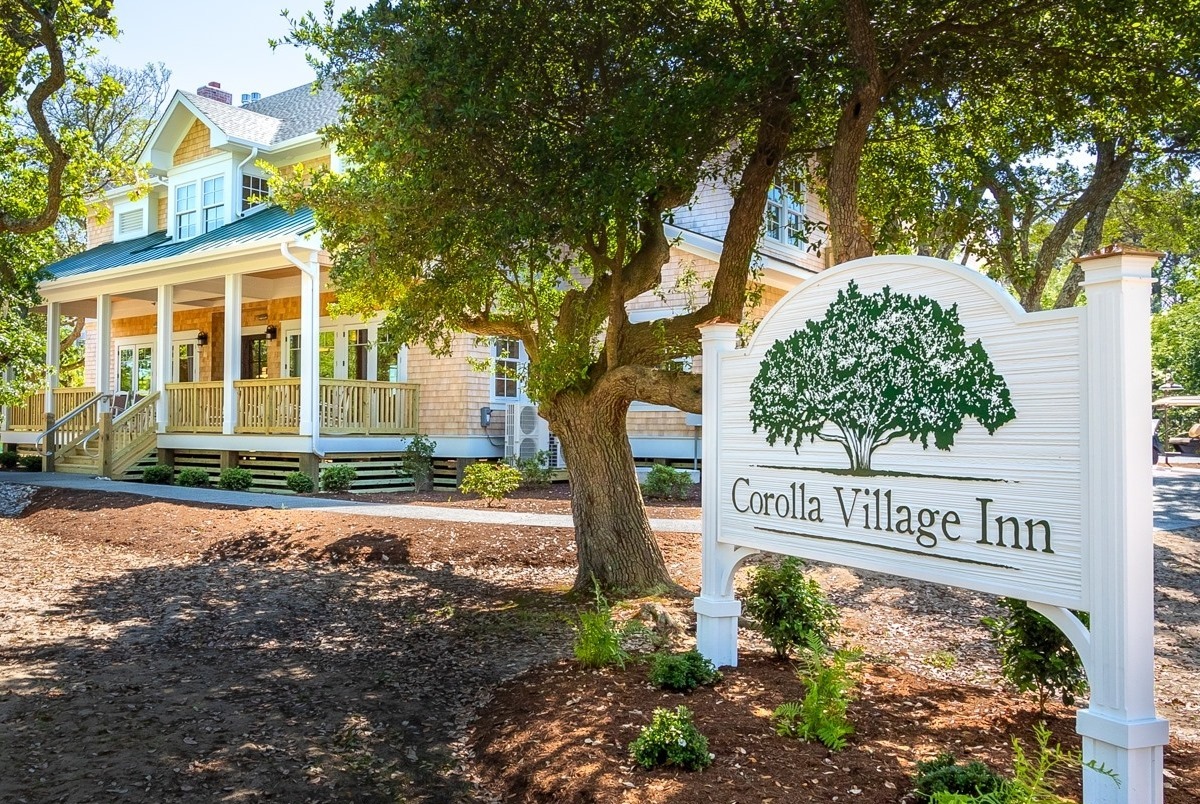 Business is Booming in Corolla

Back when Whalehead first opened about 100 years ago, Corolla had a one-room school, a post office, the lighthouse, and very few stores. Today, there are numerous businesses that serve the visitors and residents year-round.

Here are just a few of them:

Corolla Jeep Adventures lets you get in the driver’s seat for off-road adventures. Guests can drive one of the company-supplied Jeep Wranglers with the top down for a nearly 25-mile round trip experience to see the area’s wild horses.

The Currituck Club is a semi-private 18 hole golf course. It features views of Currituck Sound, rolling dunes, and on-site dining at the Hunt Club Tavern. The club also has the capacity to host weddings or a variety of events.

Looking for Restaurants in Corolla?

There are dozens of great restaurants in Corolla, serving everything from bagels and pizza to cheese steaks and crab cakes.

Whether you're looking for a quick snack before hitting the beach at Lighthouse Bagels or The Shack or you're interested in a more complete sit-down dinner experience at Mike Dianna's Grill Room, Corolla Cantina or La Dolce Vita, Corolla has you covered.

You can read more about some of the people behind the food scenes in these Small Business Spotlight interviews with the owners of Philly Steak Subs, Low Tide Bar & Grill and Cosmo's Pizza.

Or get a more in-depth take on Corolla restaurants, with these articles on Northern Lights Bakery and Off the Wall Taphouse.

Still looking for that perfect meal? Check out this guide to Corolla restaurants or head over to the Visit Currituck website restaurant guide.

These Stories on Tourism