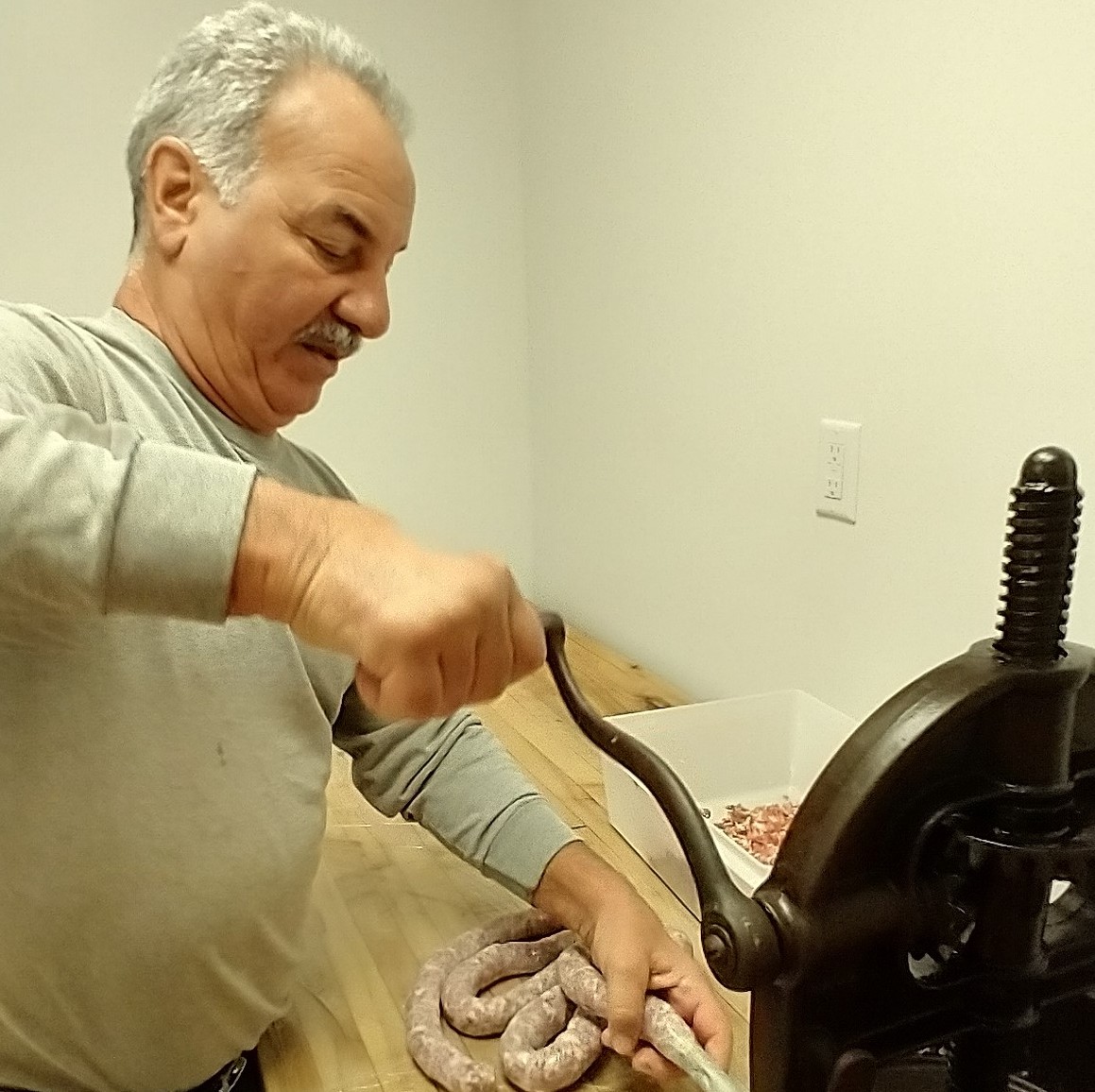 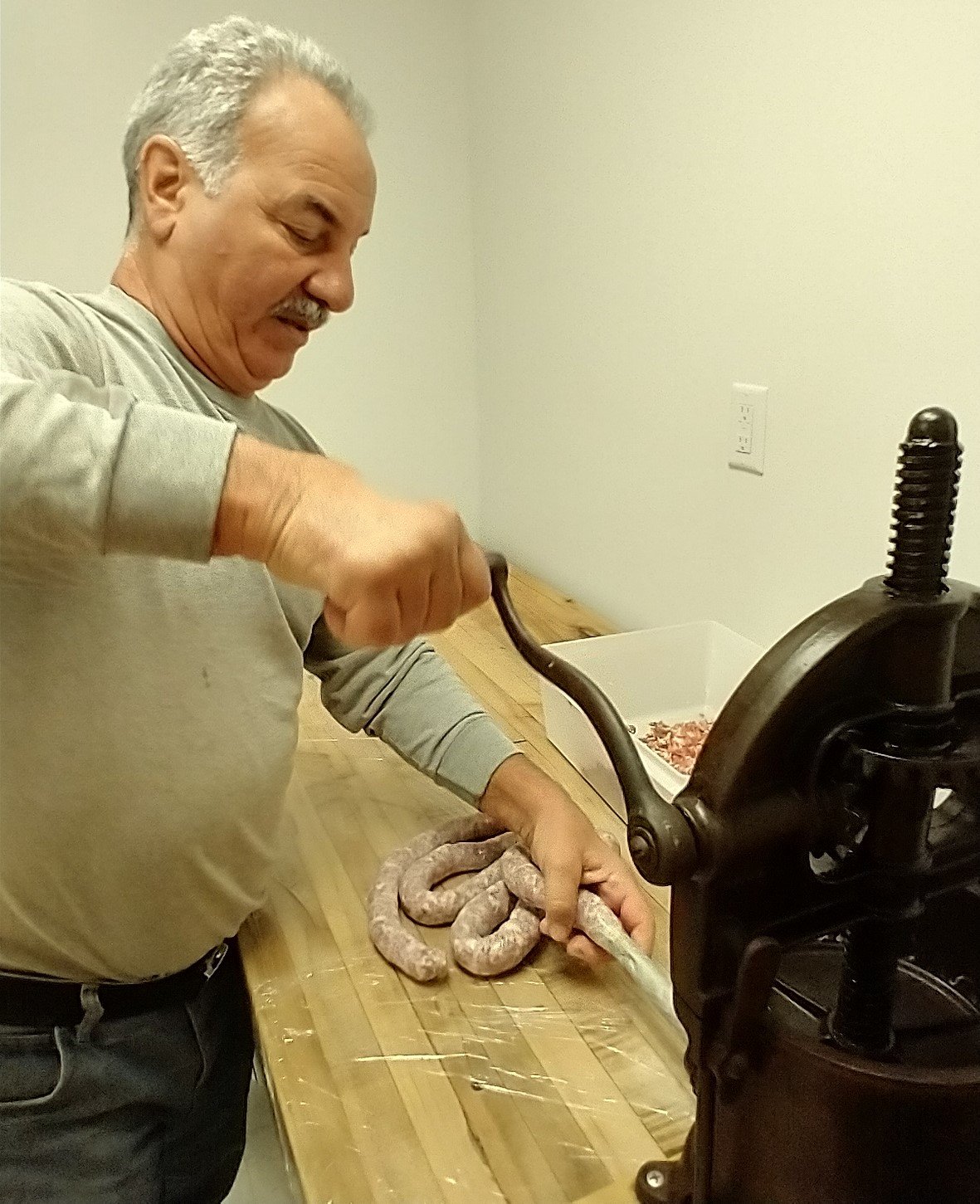 Michael Calvino filled the grinder on a recent Tuesday morning with his own Italian sweet sausage blend and turned the handle squeezing the meat into a milky white pig casing.

The phone rang, so he quickly wiped his hands and answered.

It was someone calling for an order of Caribbean Jerk sausage. He agreed to have it ready by tomorrow, hung up the phone and returned to cranking out the Italian sweet.

About a year ago, Calvino leased a space in Harbinger along U.S. 158 in Currituck County where he opened Calvino’s Outer Banks Sausage Company.

He opens for retail sales in the front area only on Wednesdays. On Mondays and Tuesdays, he creates up to 10 different types of sausage in a small back room. Among the varieties are breakfast style, sweet Italian, hot Italian, Caribbean Jerk, Cajun and Hungarian.

Each flavor is custom made based on age-old recipes. 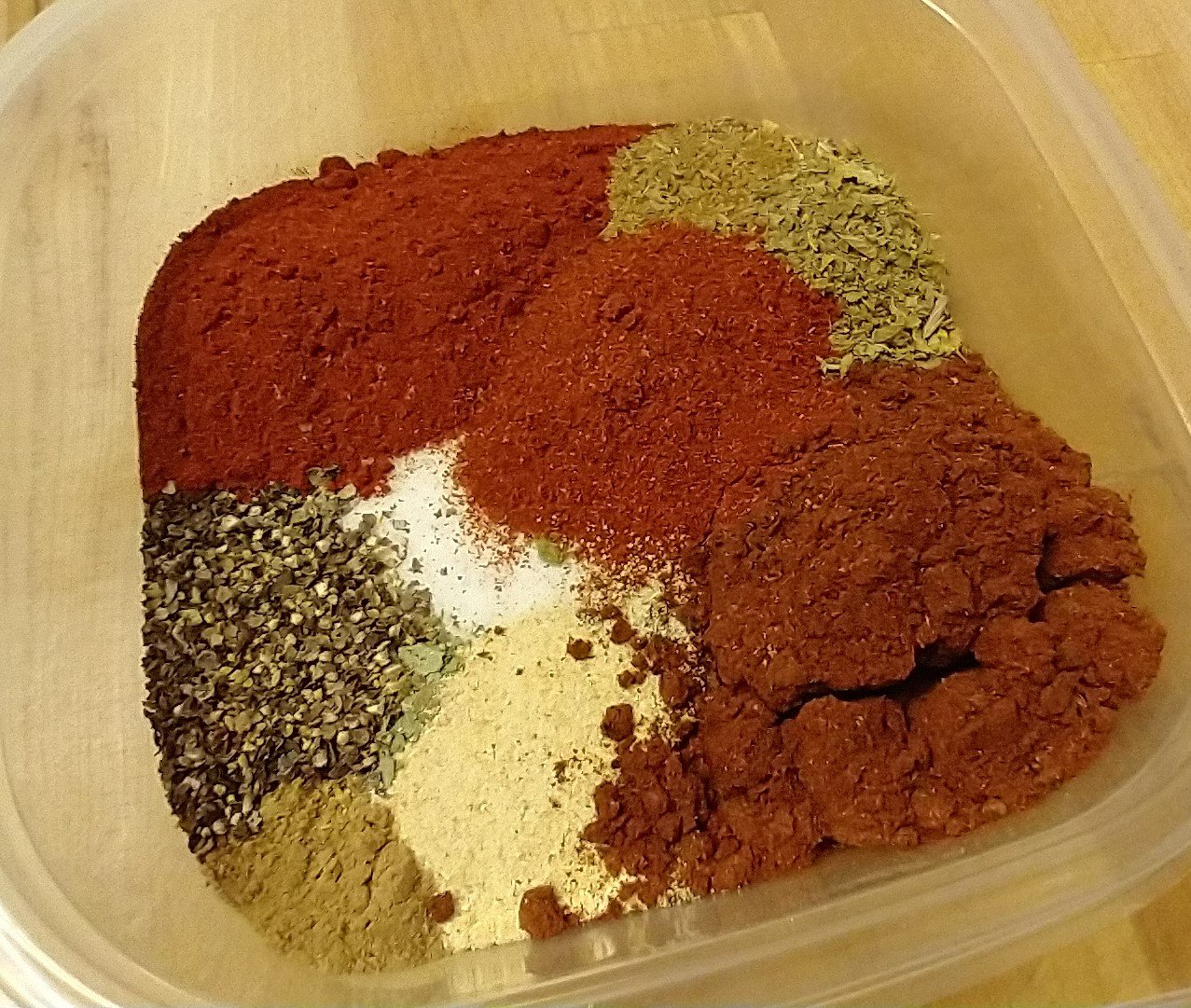 Michael Calvino mixes his own spices to make at least 10 different varieties of sausage.
The container of colorful spices almost looks like a painter's palette.

Calvino mixes enough of his spices to flavor 10 to 15 pounds of meat and places them in small plastic containers. The array of browns, greens, tans, reds and white salt look like a painter’s palette. Calvino is something like an artist when it comes to sausage flavors using just the right amounts of salt, thyme, fennel seeds, garlic and sage, among many others.

Sturdily built at age 64, he cuts away bone, glands and extra fat from pork butts he buys at local markets.

Most grocery store sausage leaves the bulk of the fat in the meat, he said. Calvino likes to parse it down to about 80 percent meat and 20 percent fat for the best flavors. The pork casings are all natural and he grates his own seasonings like garlic and ginger for the most intense flavor.

For the rest, he buys R.L. Schreiber spices from Dean Anderson, owner of Proof Bakery.

He typically makes around 75 to 100 pounds of sausage a week in a variety of flavors. He uses the hand-cranked stuffer to push the meat into the casing about six feet long. Then, he deftly and quickly pinches the casing into approximately five-inch lengths, twists into braids and they’re ready to go.

Calvino began making his sausage locally about 30 years ago from his kitchen table in Southern Shores and later in Kitty Hawk where he lives with his wife, Debbie-Lyn Calvino. His customer base grew through word of mouth.

He made his popular sausage when he could after days of  working full-time in construction. 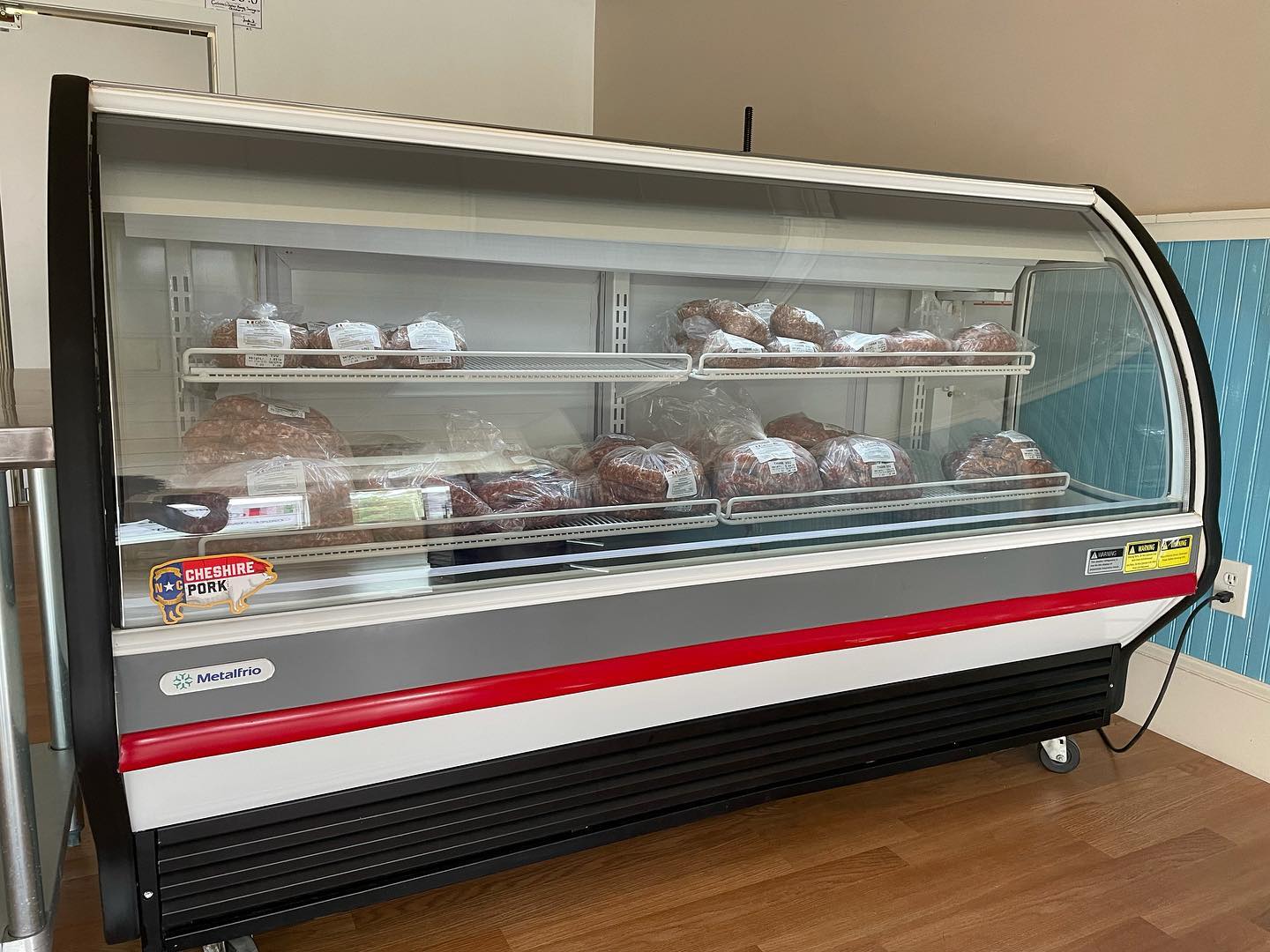 “People would hound me and I would make a big batch,” he said.

Over the years, he has gained several popular restaurants as clients including Salt Box Café, Kill Devil Grill, Butcher Block and Gutsy Grain.

Gutsy Grain makes a hot pocket from his breakfast sausage that sells out very quick, he said.

One man bought sausage from him and used it to enter a local spaghetti sauce contest in Florida. He won.

Now that he has retired from construction, Calvino decided to open the shop with plenty of room for work and refrigeration space. It was somewhat inconvenient working off his kitchen table. 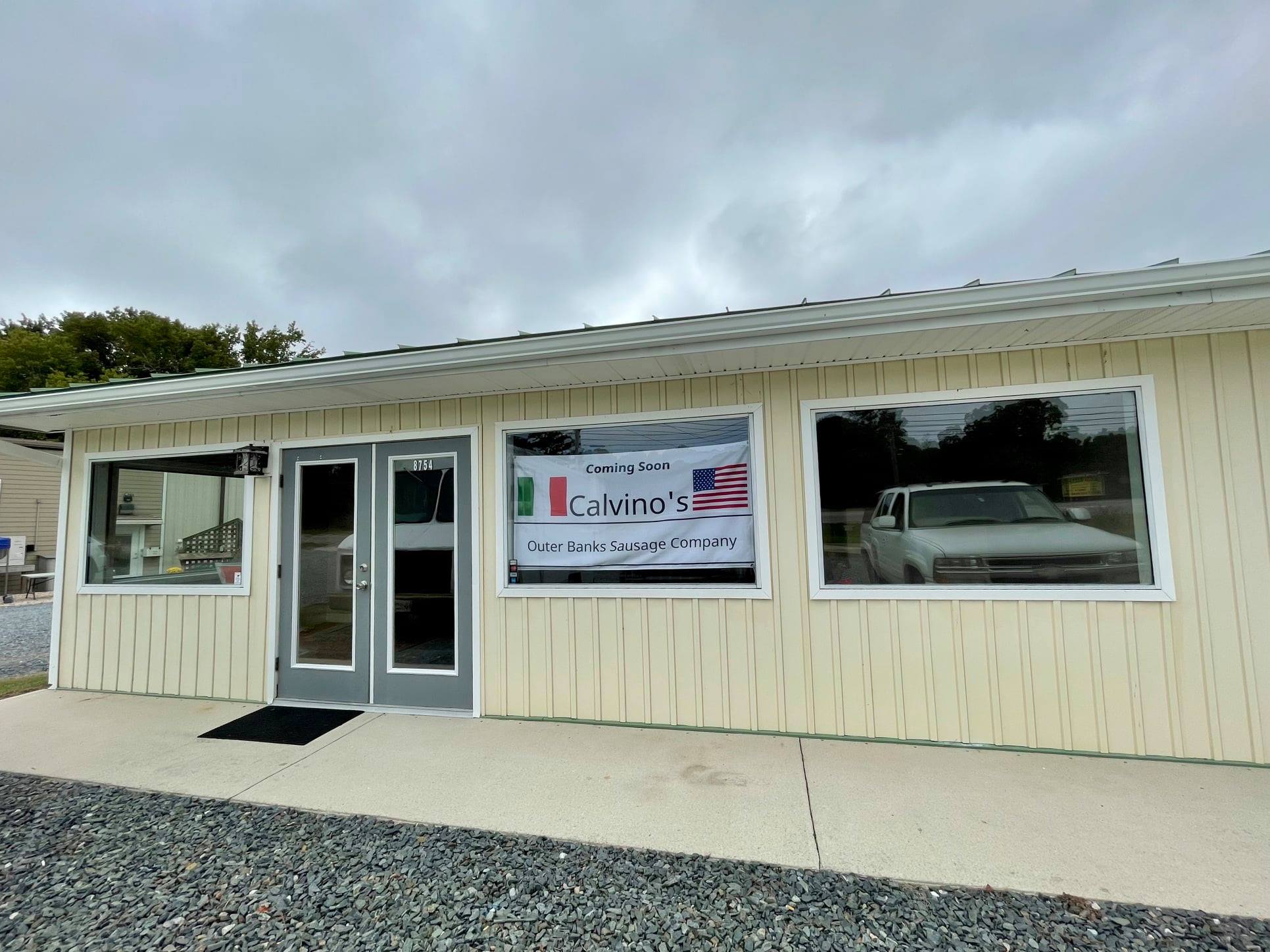 He recently bought a 12-foot by 16-foot refrigerator and freezer and other equipment from Barrier Island Bagels. In the back of the shop, he has stored an assortment of tables, shelving, attachments and machinery ready to set up for a complete operation within about a year.

He does not want to work full-time and is concerned about hiring employees when help is so hard to get.

Often, the product for sale in his shop comes from extra pounds he prepared from orders taken on the first two days of the week.

Calvino begins with recipes he’s gathered over the years, makes them and then tests them himself. For example, he made a common Caribbean Jerk recipe and found when he tasted, it needed something. He added ginger.

Not bad, but it still needed something else. He made another batch and this time added scallions.

That was the final touch.

“I know what taste appeals to people,” he said. 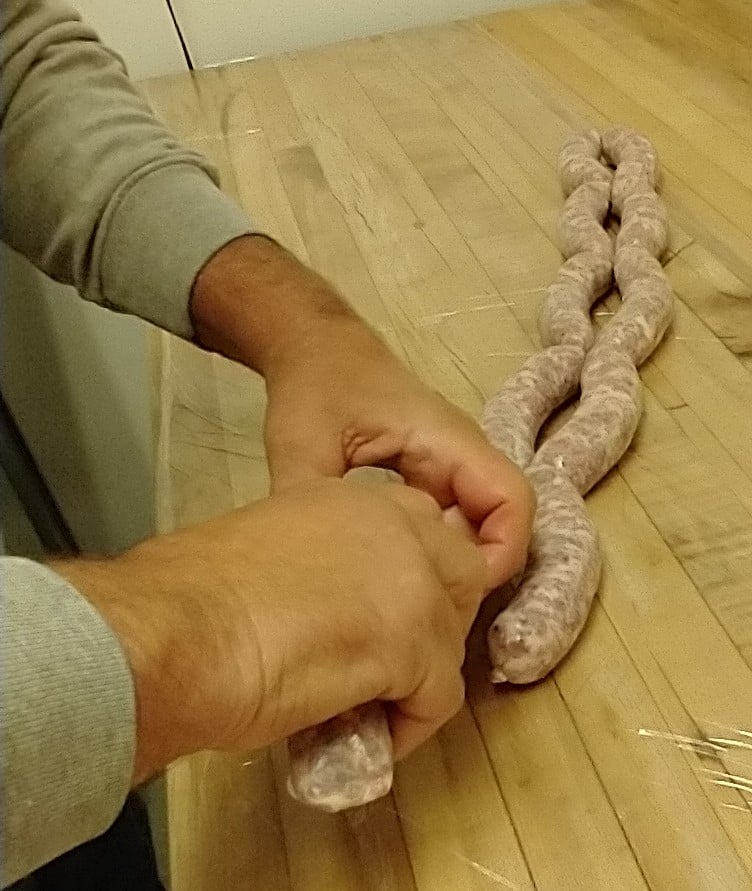 Michael Calvino squeezes and twists the casing of sausage to make links about 5 inches long.

Sausage sales are soaring in the United States. They are popular in breakfast biscuits, main course meals, for family cookouts and at ballpark tailgating parties.

Dinner sausage sales reached 1.27 billion pounds in 2020, a 15 percent increase over the previous year, according to the National Hot Dog and Sausage Council. Sales totals were nearly $5 billion.

Breakfast sausage sales volume surpassed 361.5 million pounds worth $1.5 billion, an increase of more than 15 percent from 2019, according to the council.

The organization broke down which ball parks sold the most sausages led by the San Francisco Giants with 450,000 in 2019. In total, baseball fans ate nearly four million sausages that year.

Sausages make quick, easy, nutritious meals that include protein, amino acids, vitamins and minerals provided by the meat and the spices. They are a safe food preserved with salt, cured or cooked, all processes that eliminate harmful bacteria, according to the council. 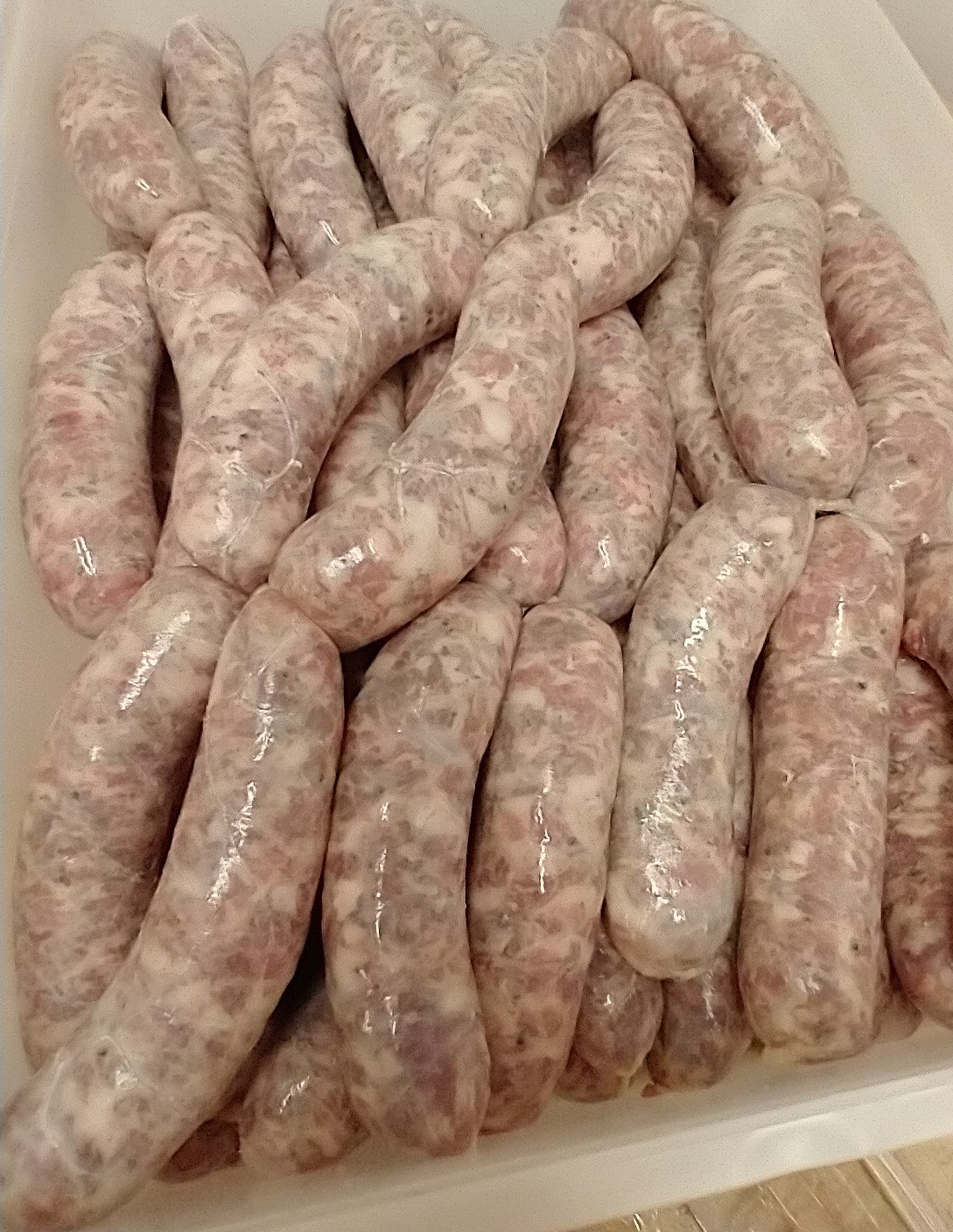 A tub of Calvino's sweet Italian sausage is almost ready for packaging.

The word sausage comes from the Latin word salsus which means something salted, according to Sausage House, a retail market based in India.

Ancient peoples made sausages as a way to preserve meat in a compact form and use parts other than the prime cuts. Even to this day, some very popular types of sausage prepared with the right spices are made from less tender cuts, organ meats and even blood. Of the 250 varieties, many are still available that originated in communities hundreds of years ago.

The making of the minced, encased meat began possibly as far back as 5,000 years ago in Sumeria, or modern day Iraq, according to Sausage House.

Sausages are mentioned in Homer’s The Odyssey which was written more than 2,700 years ago. He wrote about goat sausage on the grill,  “As when a man besides a great fire has filled a sausage with fat and blood and turns it this way and that and is very eager to get it quickly roasted …”

Sausages were sold and served in the aisles of the Greek theaters in 900 BC, the Sausage House website says. 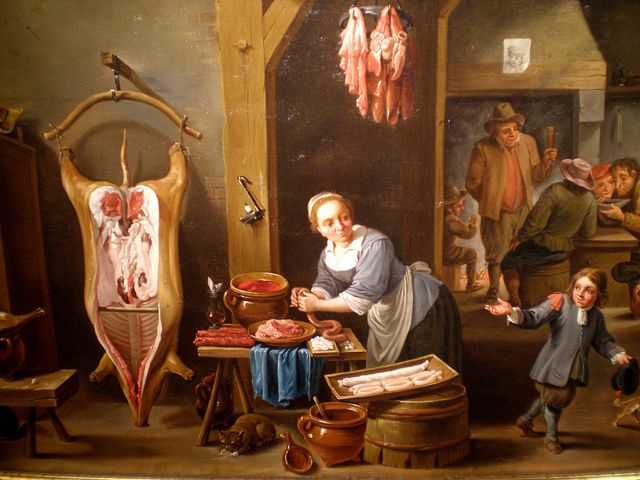 Romans made sausage types such as circelli, tomacinae and butuli eaten during annual festivals and sacrifices, according to the Food and Agriculture Organization of the United Nations.

Less prosperous Romans ate sausages made of tripe and other by-products. Some blends made in the Middle Ages were handed down through the generations to this day, the organization said.

The British called them bangers and still do because the water inside the meat exploded when they were fried.

Calvino comes from a long line of entrepreneurs and hard workers. He has followed the same pattern and so have his children.

His son, Michael Calvino Jr., graduated from the prestigious Culinary Institute of America. He now operates a food service business in Bradenton, Fla called the Spare Kitchen. He sets up at farm markets where he makes Calvino’s sausage from his Dad’s recipes. They jokingly call it "Calvino’s Sausage South."

His daughter, Christina Cison, takes care of his website, Facebook and Instagram accounts. She and her husband also own Our Corner of Currituck, where they are restoring a property on U.S. 158 that includes the 1880s farmhouse and the 1930s era service station with the vintage gas pumps out front.

His 6-year-old granddaughter, Emerald, helps Calvino by placing name stickers on the packages of sausages. 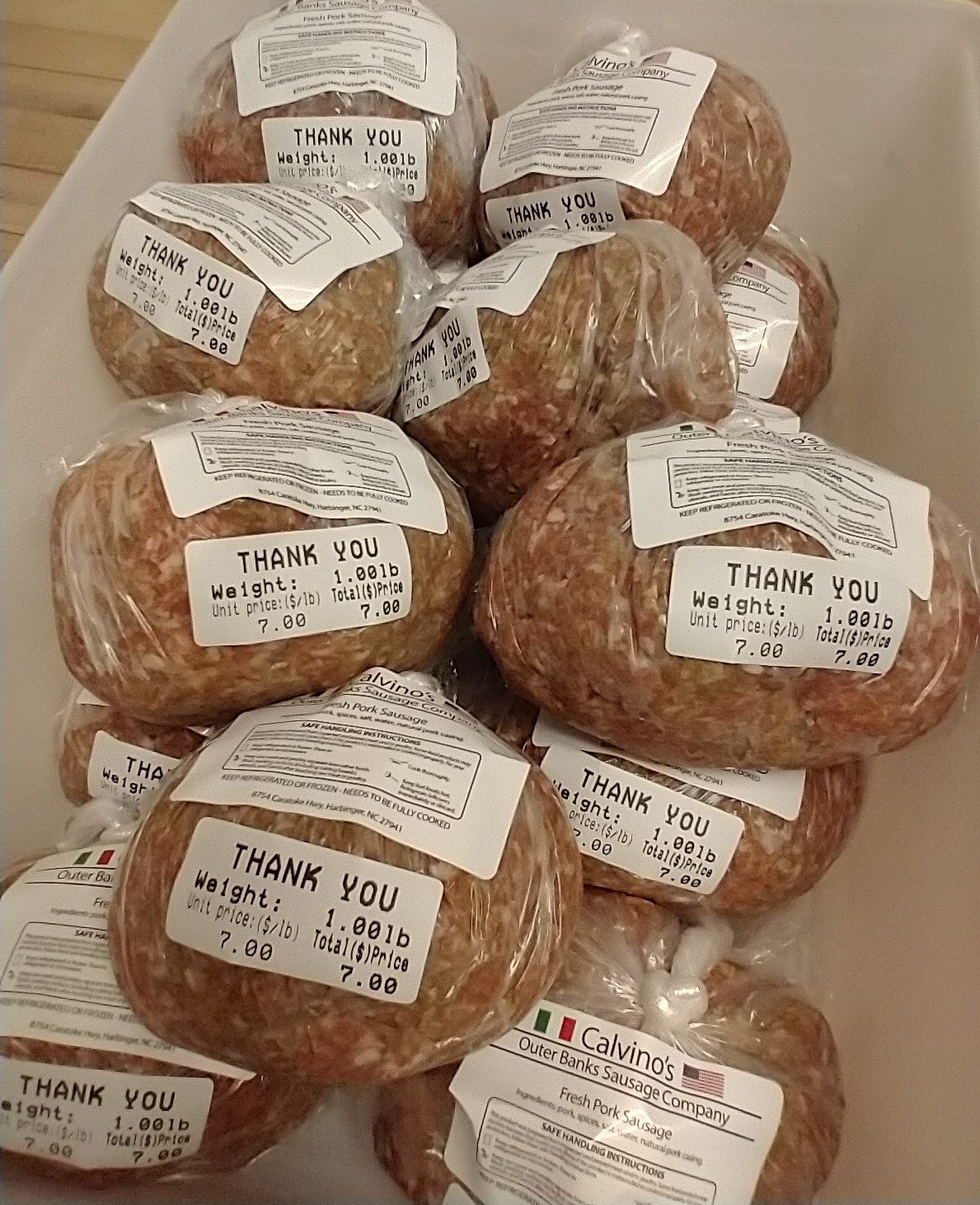 Calvino's breakfast sausage is a favorite on the Outer Banks.

As a child, Calvino helped his father deliver Italian bread Saturday mornings in his hometown of Newburgh, N.Y. His dad would wake him, go load the truck and come back to pick him up.

He recently bought and restored a vintage Chevrolet panel truck much like the one driven by his dad in the 1960s. It sits in back of his Harbinger shop and will soon be used as a food truck for sausage products.

He also helped his grandfather and father in a tile business.

He quit school at age 16 even though he was making pretty good grades, he said.

After trying a couple of factory jobs, he began working at a corner grocery store called Pennisi’s Market where he first learned how to make sausage. He worked there for more than two years.

He moved to Florida and worked in a boat yard then got a job in a restaurant washing dishes, cooking and bartending. He returned to New York to work at a Coca Cola franchise.

About that time, he met his future wife, Debbie-Lyn, in Jersey Shore. They were married and later had a daughter.

His wife is currently a piano teacher as part of Calvino Studio.

He operated a house painting company for a while. He bought a New York home built in the 1800s, renovated it and turned into a rental. During the renovation, he further honed his construction skills further which would prove beneficial for his next move.

When his daughter was about to start school, they decided to move to the Outer Banks of North Carolina where they had vacationed over the years. That was little over 30 years ago.

After moving to Dare County, he began building and selling speculation houses and stayed with the construction business until he retired.

Now sausage gets his full attention.