Craig Eason lined up the rapidly circulating blade on his sawmill to slice bark from a hulking oak log.

In minutes, the cut revealed a beautiful grain underneath the bark.

He nudged another lever activating a metal arm that turned the log over so he could cut the bark from another side. Soon, he was left with a 10-foot long, square oak piece called a “cant.”

This was no industrial project. The customer wanted the oak tree from his yard cut into boards one and quarter inch thick. Eason would finish the board cutting job later.

“I like catering to the individual,” Eason said after the sawmill motor decelerated. “I don’t care if one person comes up here and wants one two by four, I’m going to cut that for him.”

Eason, owner of Currituck Millworks in Moyock, gained a greater appreciation of taking care of the customer when about 20 years ago he wanted boards cut from two big cypress trees leaning over a nearby swamp and a maple tree.

He was working at the Ford plant in Norfolk at the time and did not own a sawmill.

He loaded the logs onto his trailer and left them with an area sawmill to get the boards cut. Six months later, he returned and the job was not done. The man told him the cypress was too rotten and he should take it away. He promised to cut the maple, but never did. He was too busy with larger projects.

Eason knew the cypress heartwood was solid and he still wanted the maple cut. So, he took matters into his own hands, bought a used sawmill and set it up on cleared property behind his home.

He cut the cypress into beautiful boards and made stools that he gave to neighbors. He made a rocking horse from the maple that his family still owns.

He began doing work for friends and neighbors as a hobby after he finished his workday. The demand grew, and at the encouragement of his wife, he started a sawmilling business in 2002. 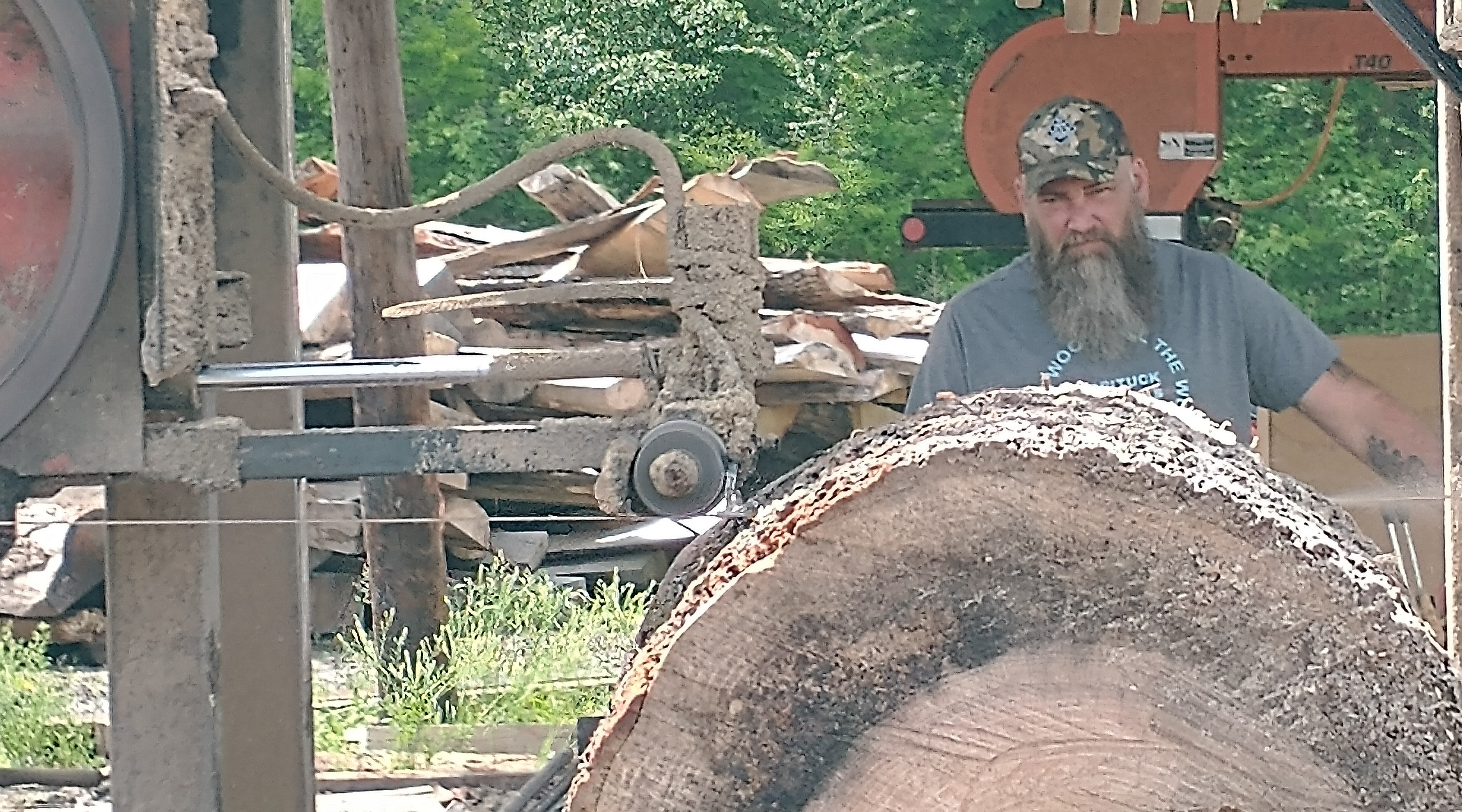 Eason eases the blade through an oak log that he will cut up into boards for a customer.

Working with wood and heavy equipment comes naturally to him, he said.

Eason resembles a lumber jack, standing well over six feet tall with broad shoulders and big hands. A long beard reaches down to his chest.

“Half the old houses in South Mills have cabinets built by my granddaddy, Jack Eason,” he said. “It’s natural for me to do this work, too.”

He soon earned a contract to cut extra sturdy boards used to build custom pallets for an Elizabeth City company. The job was big enough that he needed a larger mill.

The new machine was more powerful and could cut logs up to three feet in diameter, but it still lacked the attached, labor-saving hyrdraulics of more expensive mills.

At first, he manually had to turn the log for the next cut using an old-fashioned wood peavey, a tool with a long handle and a curved hook at its base.

He held up the old peavey to show how worn the handle was from so much heavy use. He still on occasion latches onto a log to roll into the right place. 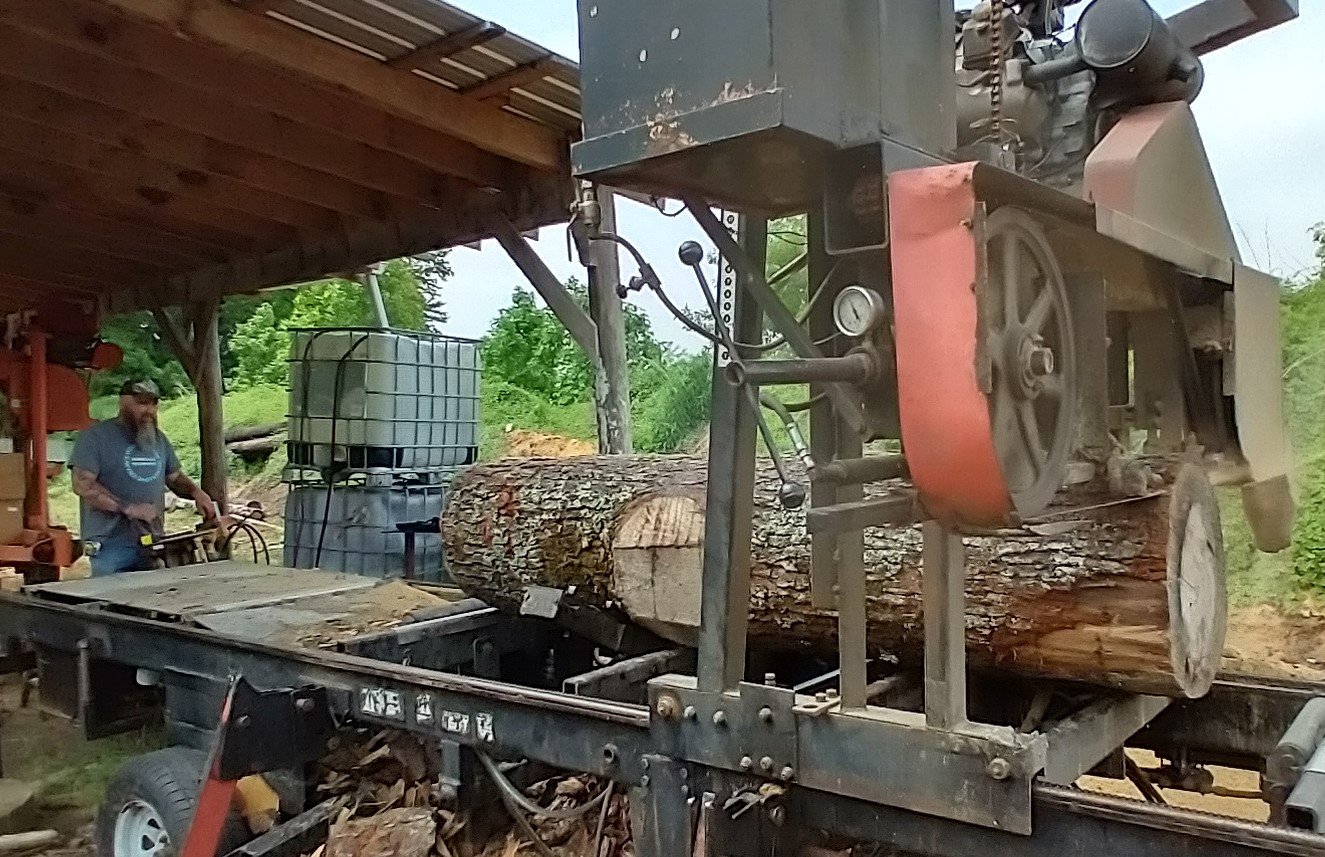 Eason works the hydraulic levers on his sawmill to cut through an oak log.

Over time, Eason considered other expensive mills with more hyrdraulic accessories, but realized he could make and attach them himself. He had always been mechanically inclined with skills in welding and fabricating metal, he said.

He duplicated the hydraulic parts and ran fluid hoses leading to a control panel where he could just stand in one place and manipulate the log on the sawing platform with the push of a lever.

He made a device that would turn the log and another that would clamp it place. He added a hydraulic blade guide to make easy cutting adjustments and a toe board that can lift and level a log of uneven diameter.

He added an additional motor below the cutting deck to run the hydraulics. A single motor running both the saw and the hydraulic accessories drained cutting power.

Now, instead of three levers on the control panel, he has 11 that he can quickly move and make adjustments as he cuts. He no longer has to constantly stop the mill and make a manual change.

When the Ford plant shut down in 2007, he accepted a buy-out and used the money to pay off equipment or invest in other machinery. He had started a tree cutting service the year before including a truck with a high-reaching boom. The sawmill and the tree cutting service matched well. People who wanted trees taken down often wanted boards cut from the logs.

The pretty grain shows after Eason has cut the bark from the log.
The piece can be made into a mantel or furniture.

He ran Albemarle Tree Service for 10 years before shutting down that business when the millwork became a full-time enterprise.

His Moyock property is surrounded by land once covered in forests and has a lumber heritage.

“Moyock” is an Algonquin Indian name that means "place of the oak on the trail." It became the locality’s official name once the post office opened in 1857.

Large stands of cypress and juniper trees grew around the creeks and swamps in the area.

Moyock was home to a thriving port more than a century ago where loggers harvested cypress and juniper for making shingles used on homes and buildings. It was named Shingle Landing.

A mill in the village cut the logs into shingles that were carried in boats from the small port. Cypress was a durable wood that could withstand the humid climate.

The old port is long gone, but locals still know the location of where the landing used to be. The small creek remains, but is far too shallow and overgrown to handle much more than a canoe or small boat.

The shingle industry waned in the 1800s and so did the Moyock community.

A railroad built to pass through Moyock and connect to Elizabeth City in the 1880s helped revitalize the economy there.

The Carolina Land and Lumber Company began cutting timber in the woodlands surrounding Moyock in the early 1900s.

The company built a hotel to accommodate laborers who would be working for the company. The local forests were nearly cleared in the next 15 years and the company shut down.

Creeks run from a more elevated area known as Puddin’ Ridge that was once forested. Mules walked down the creek banks pulling the lumber floating in the water to a mill. Eason has found bulkheads built along the sides of the old creeks that were hand-shaped by hatchets more than 100 years ago.

Puddin’ Ridge Road runs through well-developed neighborhoods now not far from where Eason’s mill is.

Stacked on his property are two tractor-trailer loads of oak for a company that wants 12-inch square boards 15 feet long for a dredge deck that transports heavy equipment. Each of the roughly 100 logs will render one board.

A large stack of pieces leftover from squaring off the boards lies near the mill. Each one could be turned into a mantel or furniture pieces. Much of it will go to a customer who buys for firewood.

Sitting on his property are Douglas fir logs about 30 inches in diameter that were once used on a waterway in Virginia as a type of bulkhead. They were going to the landfill until he and a friend decided to save them.

The trees were cut and shipped from the west coast in the 1970s. By counting the rings, he determined the trees were 180 years old when they were felled. They had been growing since just after the Revolutionary War.

Boards cut from these logs would make great furniture, mantels or kitchen counters. 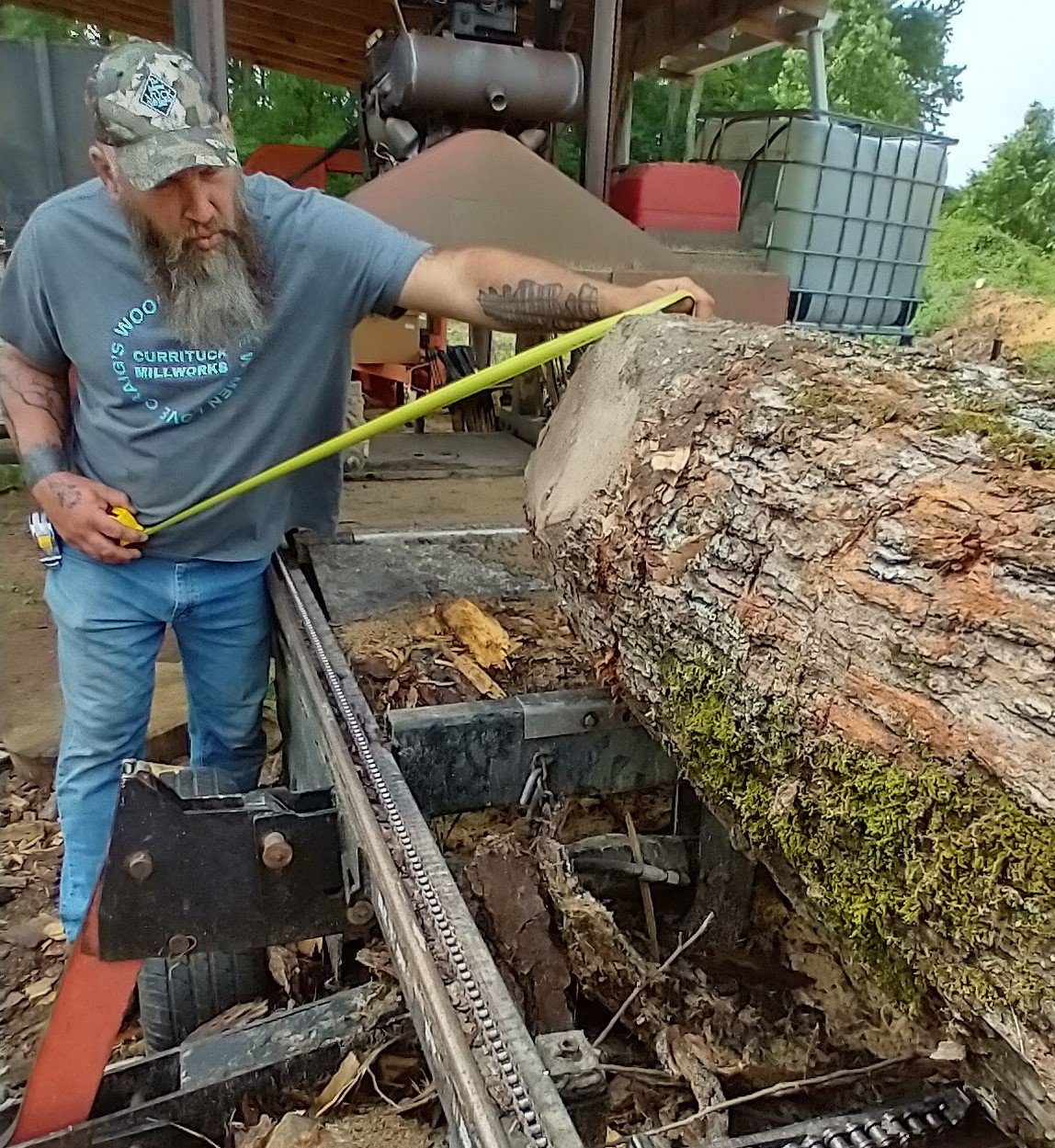 Eason measures a log to calculate approximately how many boards he can cut from the log. Boards cut from a tree at his mill are typically much less expensive than lumber bought at a hardware store.

He calculates price by figuring a fair combination of the time it takes to do the job and the number of board feet.

Every step of improvement raises the value of lumber, Eason said. The price rises as the log becomes cut boards, is dried and planed and then made into a product such as molding.

A client wants 4-inch square posts and boards 1-inch thick by 8-inches wide cut from pine logs. Sawing boards from his own logs could save the client hundreds of dollars. Big hardware stores would charge much more, he said.

He stood next to one of the 24-inch diameter logs and made some quick estimates using the calculator on his phone. Eason figured he could cut from each log more than 50 boards that will be 14 feet long. Each board would cost about $5, about a quarter the price charged at a store.

For another customer, he cut 220 boards from 10 gum tree logs.

“When I’m finished, it looks like more wood than they brought to me,” he said.

The most intriguing piece is a cypress log found buried on a friend’s property while clearing the land. It was four feet in diameter and never cut. It had fallen there some 500 years before and become buried. The dense, oxygen-free soil had preserved it. The tightly packed growth rings indicated the tree might be 1,500 years old or more.

Eason sawed into boards a tree that began growing around the early stages of the Roman empire.

“It was amazing to cut something like that,” he said.