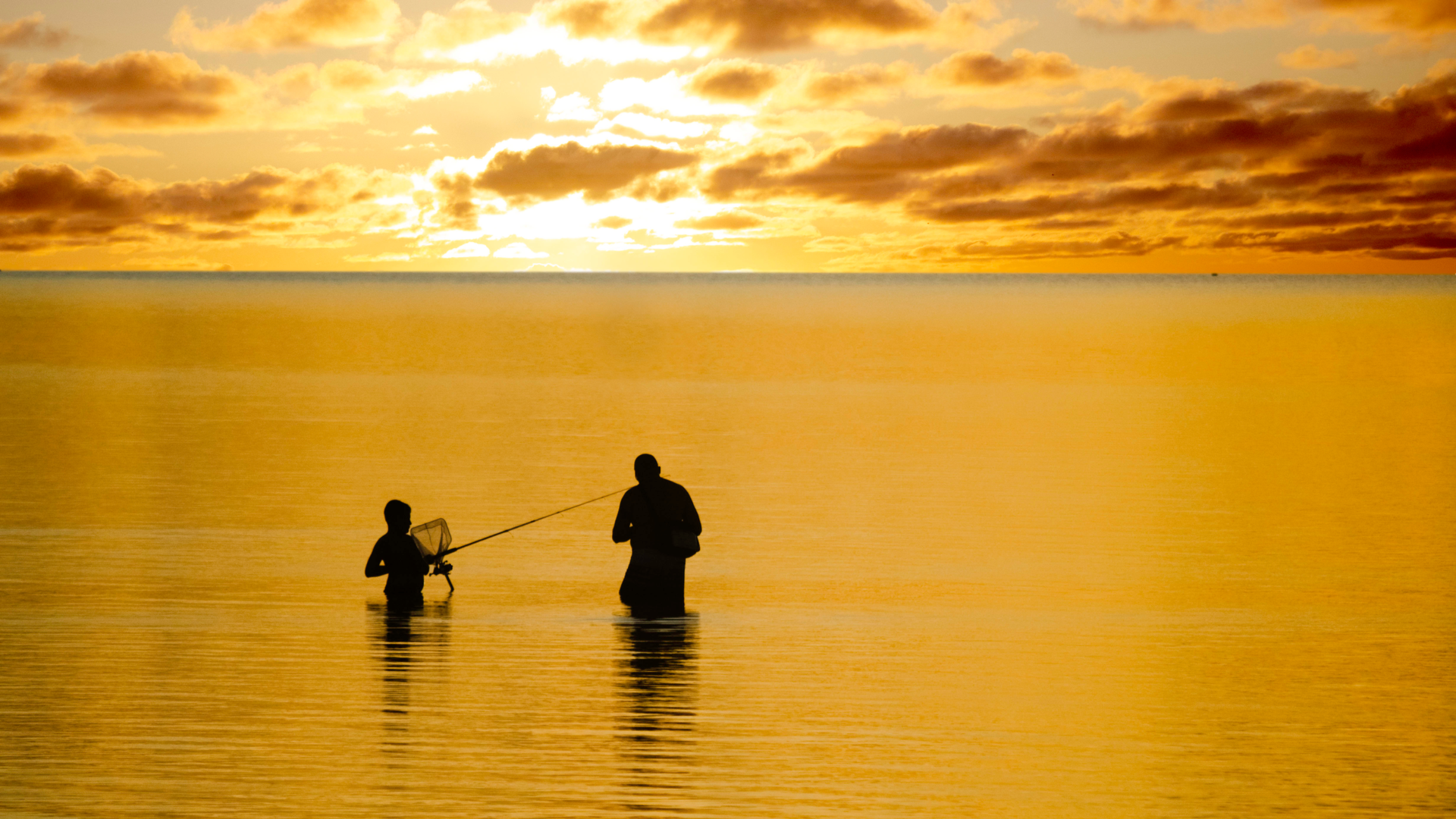 Made in Currituck: Foolish Angler 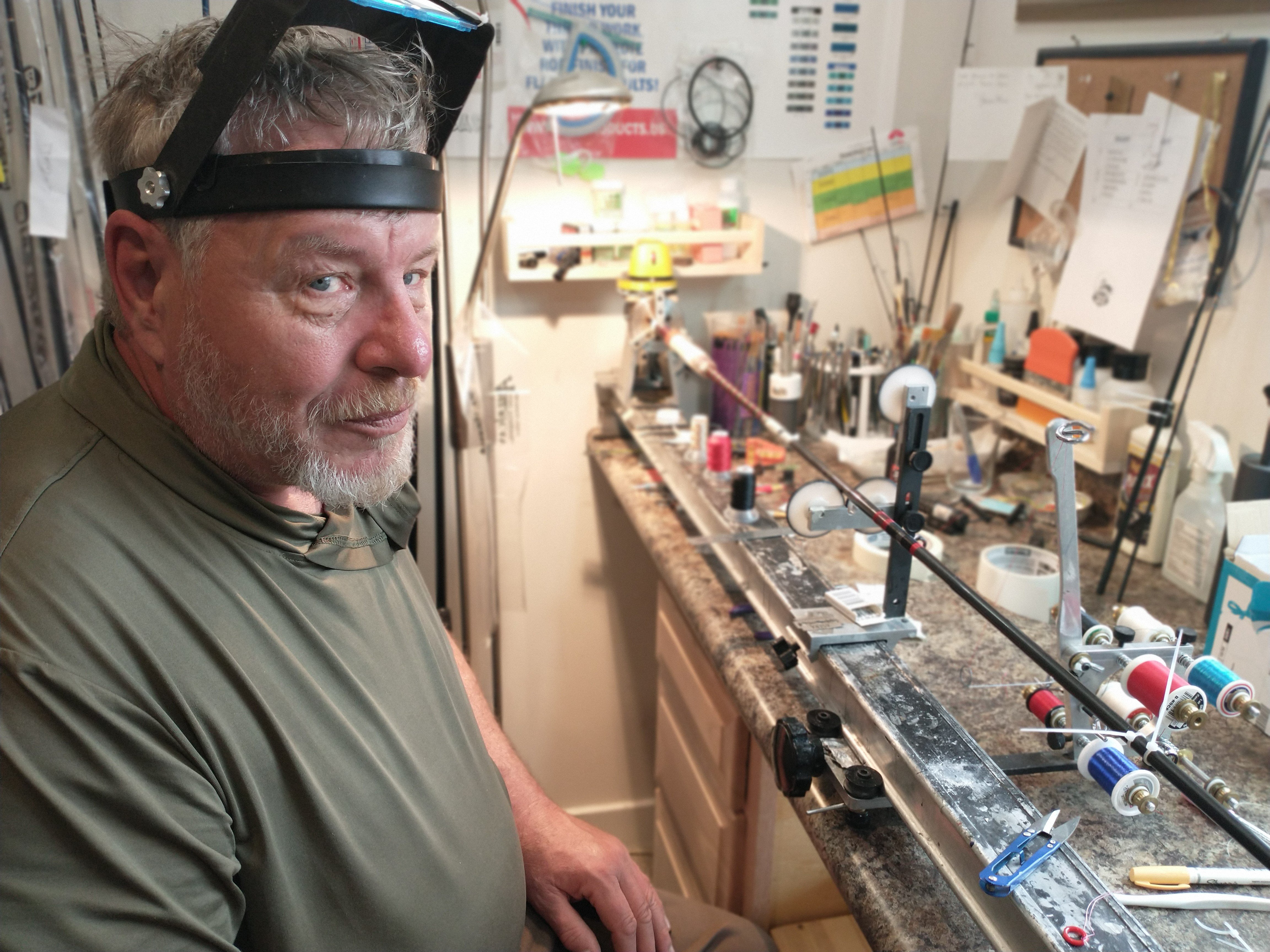 Gary Kubit peered through his magnifying goggles as he carefully manipulated bright red thread around the fly-fishing rod he was making.

He leaned from his chair toward the work bench as the thread wrapped around one of the fishing line guides. The sturdy, colorful thread would serve both to fasten the guide to the rod and as a decorative element.

The rod’s handle was made of a series of cork rings from Portugal adjoined to a band of oak from an old barn found in Pasquotank County. Two other pieces made from juniper completed the handle.

He snagged the juniper pieces off the bottom of Tulls Creek, not far from his Moyock workshop set up in a front room of his home. He shaped the wood pieces himself on a lathe.

A section of the rod was decorated with gold and red thread wound in a pattern that will, after many hours of work, look like fish eyes. The red thread around the guides added matching color.

This specialized rod fashioned with strength, feel and beauty will be one of a kind for the customer like a tailor-made suit.

Kubit, 65, started his custom rod making business he named Foolish Angler in 2020 after retiring from Maersk Lines, based in Norfolk.

The company name came to him on a whim one day, he said.

“It just seemed to be the right thing,” he said.

His custom fishing rods come in all types - long and short, small and large diameter and freshwater or saltwater styles.

“They come to me, describe what they want and I build it,” he said. “I never question what people want to fish with.”

Kubit made his first rod as a 12-year-old helping his older brother who had started making his own custom-rods. He made them throughout his high school years in L’Anse, Michigan.

In those days, he braced the unfinished rod - called a blank- on a cardboard box with a V cut at each end to hold it steady. He kept tension on his thread by weighing it down with a dictionary.

There was no internet. He filled out orders for rod parts on a mimeographed sheet of paper and sent them in to a supplier, then waited for their arrival in the mail.

He made rods for friends as he traveled the world for Maersk working as a port engineer and ship manager. He also fished all over the world using his own rods for a wide range of species in all kinds of waters.

He once cast his line off the stern of a research vessel in the North Pacific while working as part of a team doing oceanographic surveillance. He used one of his own fly rods that he could take apart and fit in his suitcase. He and friends caught a load of salmon that a co-worker sliced up into sushi for supper.

Kubit used that rod to fish in Spain, Scotland, Germany, the Philippines and Japan, among other places.

Now, he fishes his rods in more local waters.

Just before Christmas, Kubit and others with him used his rods to fish about 28 miles off the coast of Virginia. They caught 90 black sea bass in 40 minutes. Every person caught at least one citation size.

Currituck County is ideal for a rod making business. The sounds and sea around the Outer Banks offer some of the best fishing in the world. Anglers can go saltwater fishing by casting from shore, from a pier or by chartering a boat. The Gulf Stream flowing from the south and the Labrador Current flowing from the north carry a wide range species that feed off Hatteras Island including bluefish, red drum, flounder, striped bass and Spanish mackerel.

Those who prefer freshwater fishing can boat or kayak through the many creeks along the sound, hire an inshore charter or fish from docks along the shoreline catching such species as striped bass, large-mouth bass, perch, trout, flounder and catfish.

Kubit can make a rod that best fits the type of fishing and the species, he said.

A man recently ordered four custom rods to catch Spanish mackerel. He could not find what he was looking for in the stores. The man wanted the rod to have the exact right specifications for himself and for catching that particular species.

The angler wanted to feel plenty of action after the catch and not have to be dragging in the fish, Kubit said.

“I think he’s going to be happy with what I’ve built for him,” he said.

He is building a freshwater rod for an angler who had seen some of Kubit’s rods at the Currituck County Wildlife Festival. When requested a rod, Kubit asked him what type and what design he wanted. The man told him to make it in whatever way he saw fit because he was sure it would be right for him.

The customer is a money manager and the bottom line is either in the black or in the red. So, the new rod will have a black and red theme.

He spends hours making each rod, one by one. His shop is furnished with more modern equipment than he had as a high school entrepreneur.

He spends much of his labor with magnifying goggles, sitting in a high-rise chair over his workbench, creating the rod while it is attached to a machine with a long metal base. A small motor spins the rod as it lies horizontally on rollers. The machine is fitted with a laser that ensures the rod is absolutely straight.

A rod sold in the store can be a little misaligned making for harder casting and less sensitivity to bites, Kubit said. Straight rods create less friction from reel to rod tip, he said.

That can make a big difference for an avid fisherman who might cast hundreds of times in a day on the water, he said.

Attached to the lathe’s long metal base is a device that holds several spools of thread ranging in colors from red, black and white to dark blue, royal blue and white. Kubit can grasp any color in seconds and wrap a design onto the unadorned blank. A rack of thread in dozens of other colors is mounted on the wall and he has more stored in a closet.

“If his fishing rods were jewelry, this is what you would want,” said Sharon Meade, curator of the Outer Banks Center for Wildlife Education.

Kubit has volunteered for an annual event in Knotts Island held to teach children how to fish. Meade organizes the event.

Wrapping about 8 inches of the blank in a color combination can take up to 12 hours. Once applied, the thread is covered in a clear epoxy coating for strength and finish. 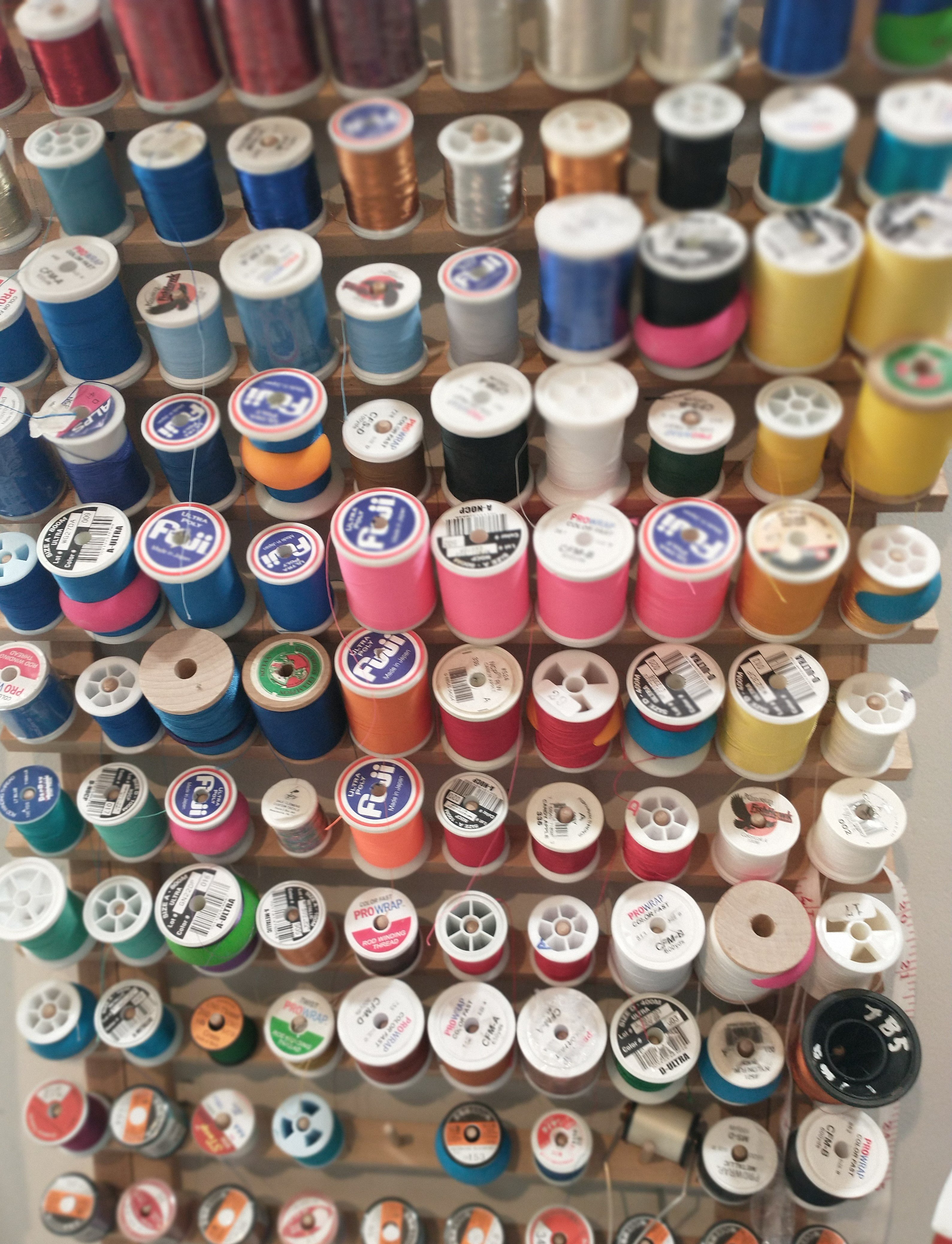 Thread is not the only material for décor. He covered part of one rod in gold foil. Another he wrapped in a decal of blue with white stars joined to a coating of red resin for a patriotic angler.

He keeps several types of blanks, in the shop. They are typically made of bamboo, fiberglass or a carbon fiber such as graphite.

Fiberglass rods are typically the least expensive and are durable, but are not as sensitive to the catch.

Graphite rods typically cost more, but have better feel or “fast action,” during the catch. Graphite rods come in different densities. A rod advertised as graphite in a store may contain a smaller percentage of graphite with a larger amount resin as filler. Kubit deals in higher quality graphite rods.

Some anglers still use traditional bamboo, the material used for the first commercial rods sold a century ago. They are mostly used in fly fishing. Companies make split bamboo rods where long, flat segments are cut and connected with epoxy to form a strong, yet sensitive fishing experience.

He can order a wide range of colors, according to the customer’s desire. He adds handles for cork, wood or rubber or a combination of all three. Then he can wrap the handle in micro cord and colored shrink tubing, shaped to whatever the angler desires to fit his grip.

He can even add a strike indicator light next to the handle that flashes when the fish bites.

Kubit tests every rod he makes with weights or by casting in a nearby pond.

He works with his customers to deliver custom rods with high quality components and, if requested, personalization within a customer’s budget, but, he explains, every facet in design choice or build requirements are elements of final cost. Budget rods with quality components start around $200. High performance rods can cost well over $1000, depending on the client’s choices. Kubit works with the customer to define and deliver the custom rod of choice.

It takes a lot of time and work, but craft fairs attract more customers than social media advertising.

An angler recently walked up to his booth at a craft fair and saw his array of custom rods, the colors, the styles and the expertise behind them.

After a few minutes, he told Kubit, “I want that rod right there.”

Later, back at the shop, Kubit donned his goggles and began work on another one-of-kind creation.