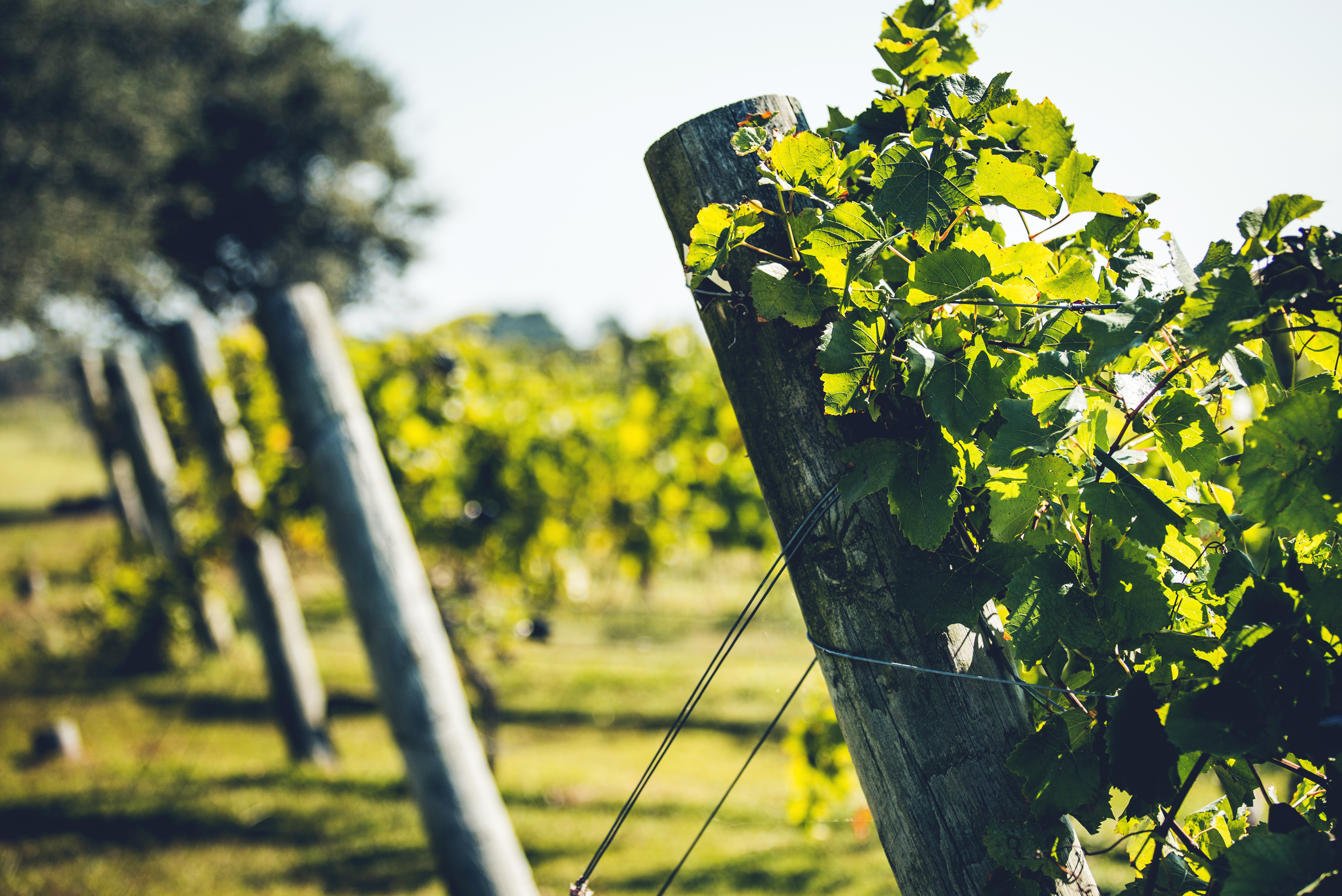 Made in Currituck: Sanctuary Vineyards 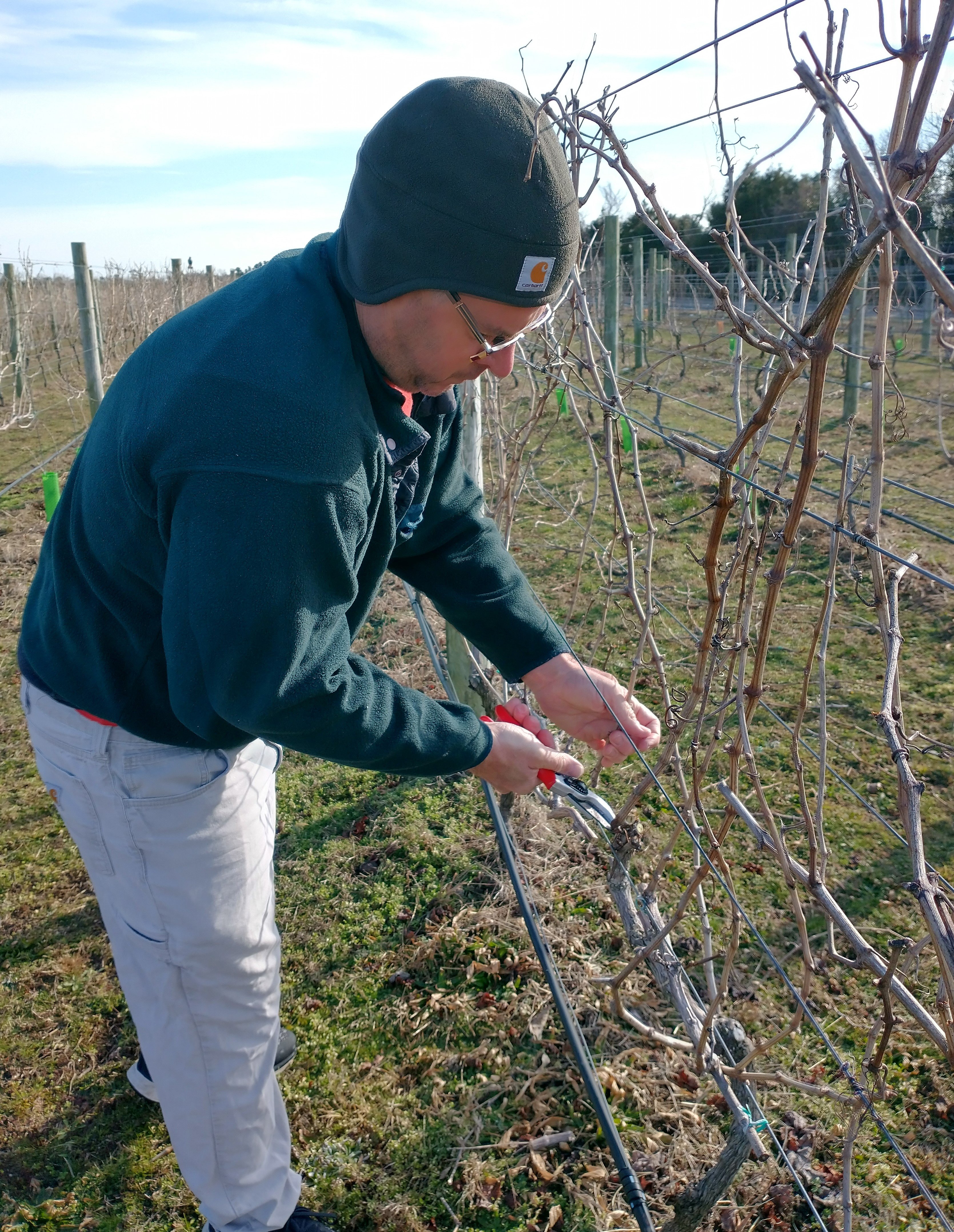 On a recent crisp morning, John Wright deftly used his hand pruners to clip grape vines growing on land owned by his family for generations.

He left only two small vines for each trunk.

Wright and crew grow the grapes, make red and white wines and market the product to customers all over the country. It’s a competitive business that requires mastering traditional methods as well as modern practices.

But the vineyard is where it all starts.

“The hardest part of this is growing,” Wright, 42, said as he continued vigorously cutting last season’s vines.

Over the next few weeks of the winter season, workers will trim each of the 35,000 vines planted in long, neat rows within 28 acres of the family farm. In the spring sunshine, the vines will be ready to sprout again.

The sandy-loam soils drain well, favorable for growing grapes and contribute a unique flavor to the ripening fruit, he said.

The land was once part of a system of ancient sand dunes. Prevailing southwest winds blowing over a hedge row close by still deposit sand here, Wright said.

The combination of good earth, sun, moderate temperatures and coastal breezes is what the French would call terroir, a term that means a “sense of place.”

Southern Currituck County has that. 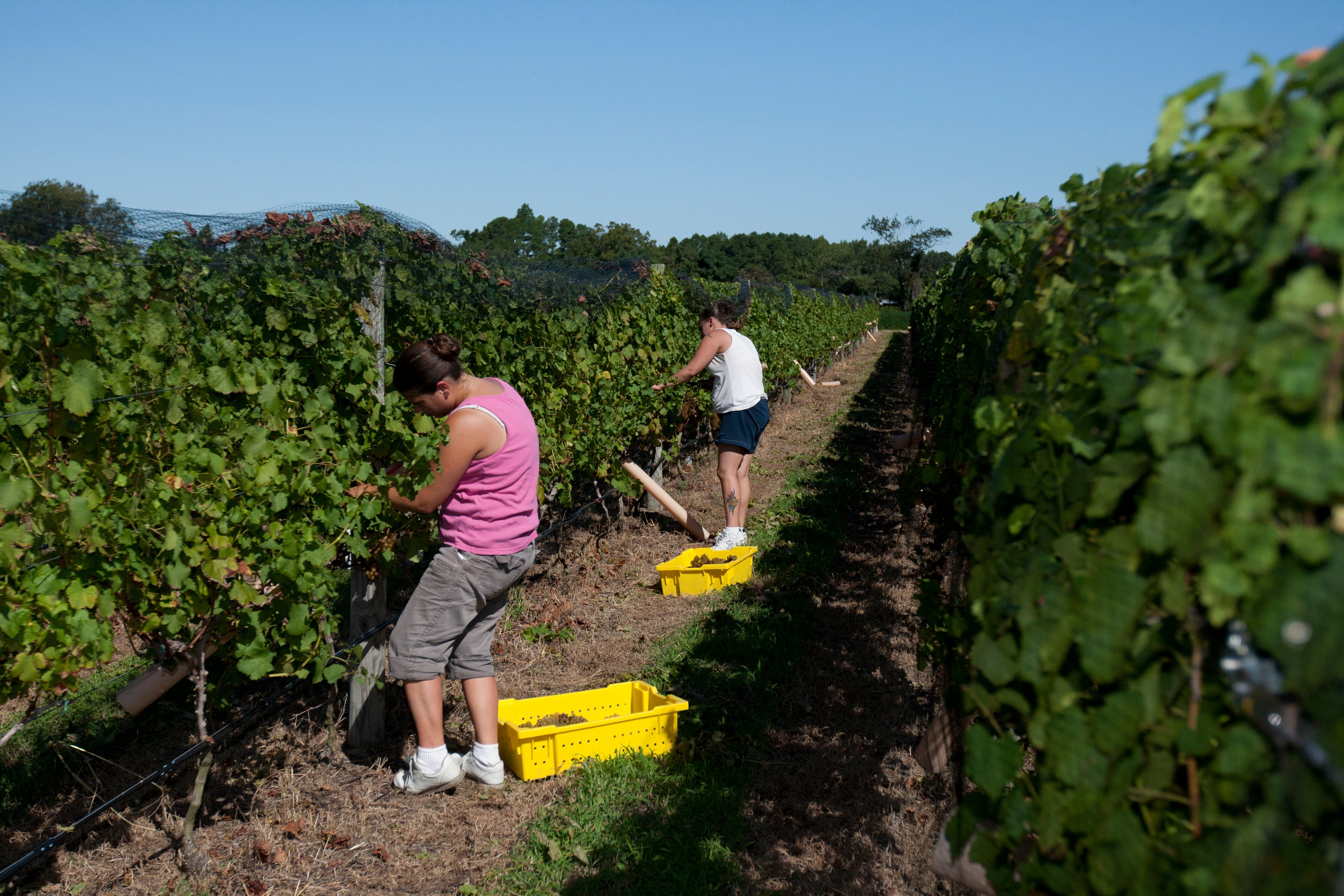 Harvesting the grapes at Sanctuary Vineyards.

Grapes ripen more easily in warmer areas which reduces the acidity, increases sugar levels and makes it a darker color.

“It makes a powerful, dark red wine,” he said.

The vineyard gets its name in part from its pastoral setting within the Currituck County countryside along U.S. 158 in Jarvisburg.

As Wright pruned vines, muted sounds of hunters firing shotguns at ducks echoed from the Currituck Sound a mile or so to the east.

The Wrights come from a long line of hunters, but the farm itself is a sanctuary for game birds and animals.

A flock of snow geese grazed in a corn field on the back end of the property. A hawk called as it flew overhead.

Wright’s family has lived here for seven generations since original settler Jacob Wright established himself after the ship he was on wrecked off the coast of Duck, located on the Outer Banks just across the Currituck Sound.

When Wright’s ancestors first settled here, the family typically grew a muscadine grape vine in the backyard, according to a history on the company website.

From the grapes, they would make jams, juice and home-brewed wines.

A sweet wine made from a muscadine grape variety known as Scuppernong became very popular helping North Carolina to become the leading wine region in the nation after the Civil War.
The scuppernong grape was the first cultivated in the United States and is North Carolina’s official fruit.

The Mother Vine growing on property in Manteo is 500 years old, the longest living known cultivated grapevine in the nation, according to the North Carolina Wine and Grape Council. 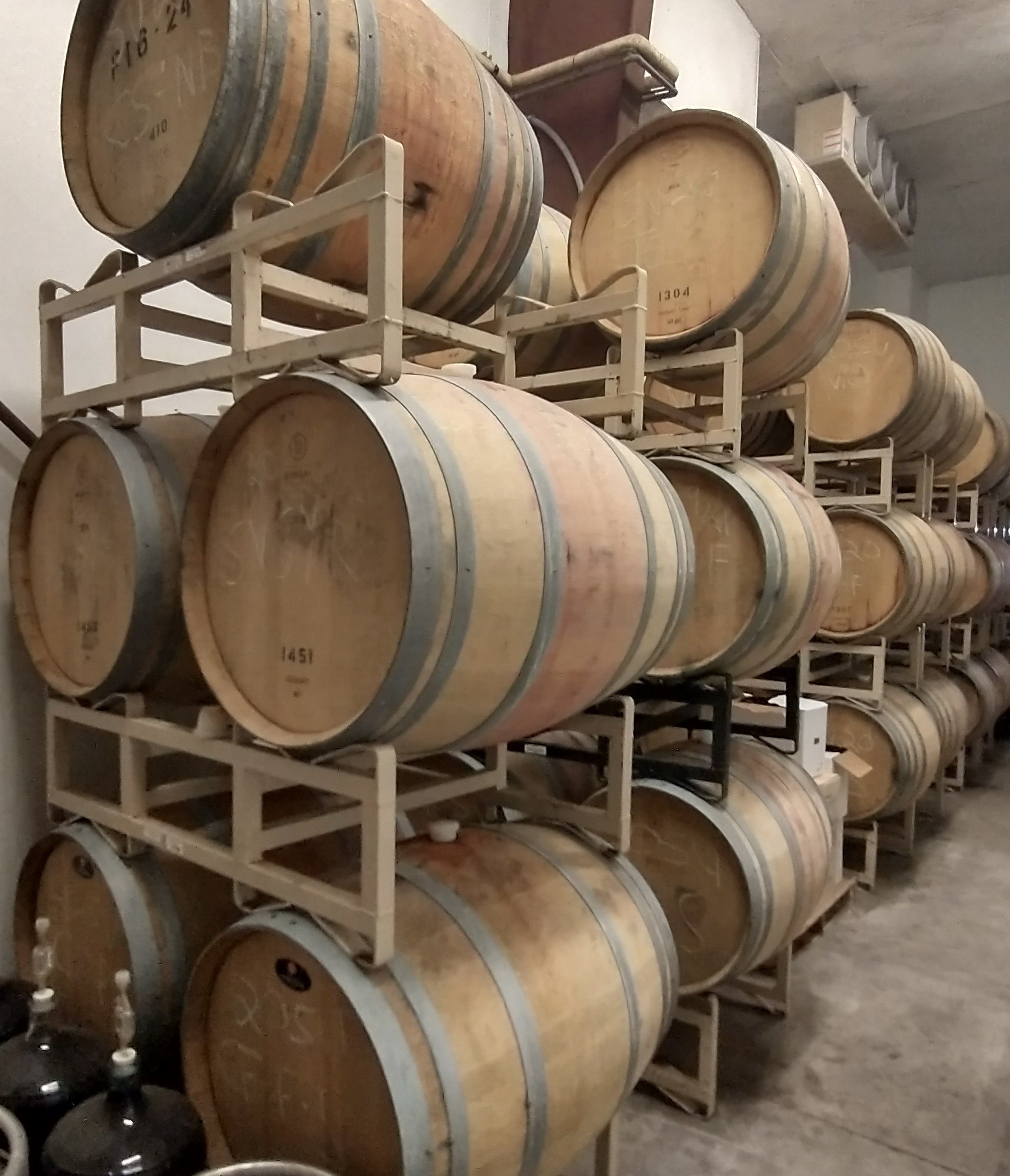 Red wines are aged in oak barrels for many months within their wine-making building in Jarvisburg.

Prohibition stopped large-scale wine production stunting the industry in the state at the time.

North Carolina now has more than 500 vineyards and 200 wineries, ranking 11th nationally in wine production, according to the council.
Visitors also find rest and relaxation by stopping to shop or attending the many activities held on the grounds.

Sharon Swarmer and her husband of Kitty Hawk are active members of the wine club here. The company holds regular public events and frequently releases new wines. Club members purchase wine packages of six bottles in May and in December.

“We go to everything,” Swarmer said. “They are always bringing out new wines. It’s great fun.”

About two decades ago, Wright’s father, Tommy, and his uncle, Jerry, determined they could diversify from the typical truck crops of corn, wheat and soybeans.

Wright graduated in 2001 with a degree in economics and planned to work at a firm within a large city such as Atlanta. But, he decided instead to keep working at The Cotton Gin, a popular family-owned gift shop and clothing store with locations in Corolla, Duck, Nags Head and in Jarvisburg surrounded by the vineyard.

Wright learned about growing grapes and establishing a winery while apprenticing with a vineyard on Knotts Island for two years. He continued to work at The Cotton Gin during his apprenticeship.
The Wright’s began the vineyard with just one acre in 2002 and over the years gradually expanded.

The farm is organized into an east block and west block. Varieties such as Albarino and Syrah grow in the east block.

Varieties such a Traminette and Chardonel are also grown. Both are French hybrid grapes crossed with sturdier American vines to create a plant that can thrive in "New World" growing conditions, according to the company website.

The Traminette is based on Gewurtztraminer, a white grape planted widely in the Rhine region of Germany, where it produces a wine with crisp acidity but with a distinct sweetness reminiscent of Riesling. The Chardonel is bred from Chardonnay, and will produce wines with the same varietal character and rich fruit flavors, according to the website.

In all, the vineyard grows 16 varieties including Tannat, Petit Verdot, Chardonnay and Cabernet Sauvignon.

The website describes some of the popular wines available:

A selection of the two finest red wine lots. Double Barrel is an estate grown blend of 50% Tannat and 50% Petit Verdot. Rich deep hues of inky violet and deep garnet stain the sides of your glass with each swirl. Aromas of ripe berries, currant, jam, vanilla and smoky leather form a rich and powerful bouquet. Blackberry jam, plum preserves and raspberries are forward on the palate. It can be consumed over the next 5 to 10 years. It is 13.50% alcohol.

“Are you ready to walk the plank?,” according to a company promotional. “Blackbeard would for a taste of our delicious red muscadine wine.” The Plank is one of the company’s most popular wines. It is full of a ripe and jammy flavor, best served chilled “while counting your gold doubloons.” The cork is sealed with wax for an even more authentic pirate look. It is 12.50 % alcohol.

This is one Wild Pony you can take home made from Chardonnay, Pinot Gris and Viognier. This smooth sipper is the number one dry wine and best seller. It is 12.50% alcohol. 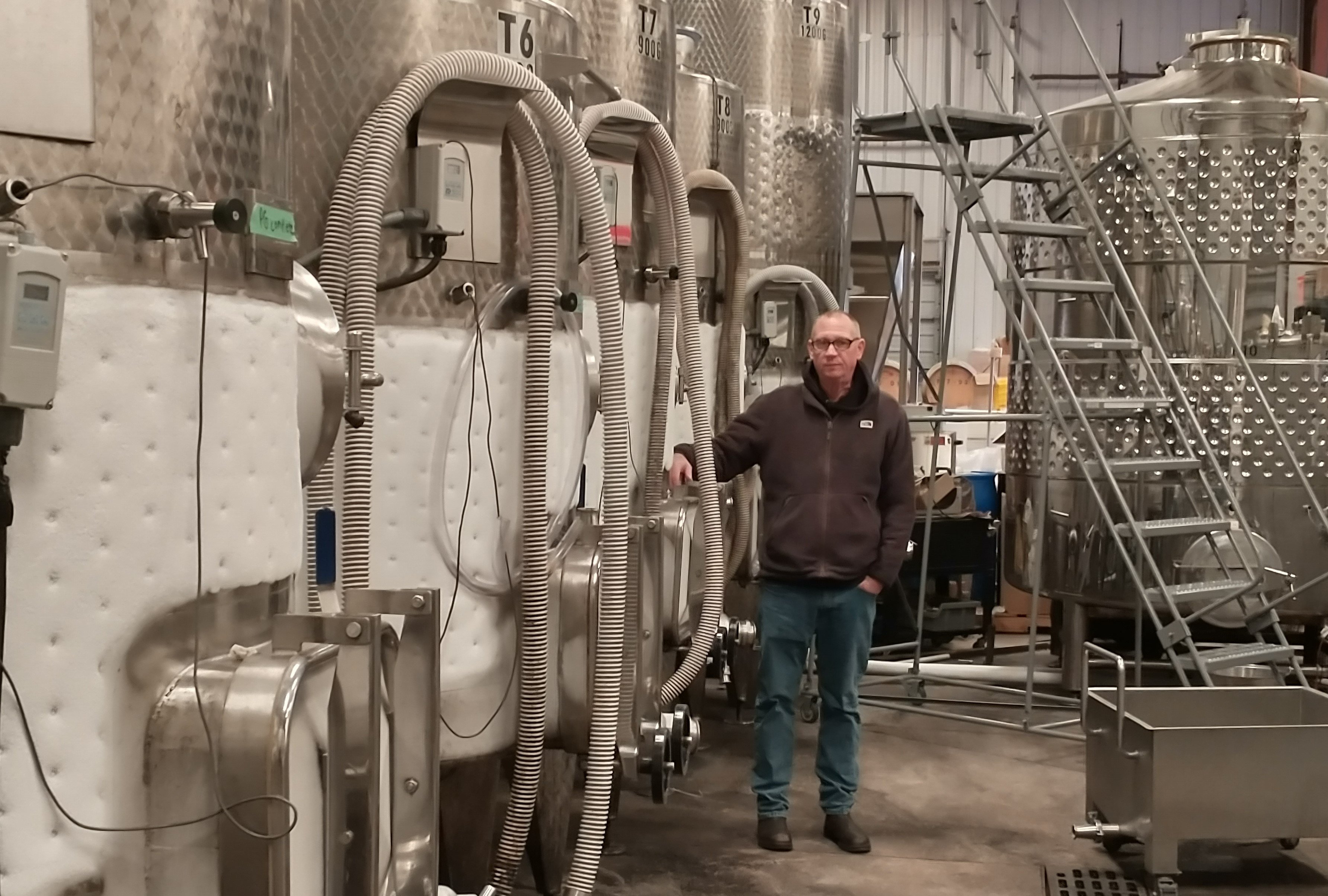 Wine maker George Butler stands next to large tanks where wines are stored and cooled.

The grapes are harvested August through October and brought to the presses in the winemaking building close by.

“The grape is going to tell you when it needs to come,” said company winemaker George Butler.

Skins of white grapes are left behind to be disposed of later. White wines ferment and age in large metal tanks. Red grape skins remain with the juice to add flavor and color. Red wines age in oak barrels stored for about two years in a room kept at low temperatures. The barrels add a warm, vanilla-like flavor to red wines, Butler said.

The company sells about 10,000 cases of wine per year.

Sanctuary Vineyards won a double gold award -the highest honor- for its 2019 vintage Cabernet Sauvignon at the 2021 North Carolina State Fair in October. The company has won gold repeatedly over the years at the state fair including for its handcrafted Cabernet Franc “La Maison Grise,” “Pearl” and “Wild Pony White.”

The company’s Pearl Albariño was one of only two and the only one on the East Coast to be named “Surprise Wines” of 2021 by James Suckling Wine Ratings.

Director of the wine rating service, William McIlhenny, wrote why the Currituck wine was chosen.

“The name suits this blend of albariño (85 percent) and viognier. Complexity and personality can come from wine grown at the edge of Wine World, where producers may have to fight September hurricanes and wild winter storms, and won’t always win. But, when they do, you can get gems like this.”

The taste goes back to the Currituck County terroir and care in its growing, Wright explained as he continued trimming in the morning sun.

Last year’s growth must be trimmed and many of the buds removed. If the plant is too thick with vines and buds, the root will shut down to protect itself and will not grow as many plump and juicy grapes, Wright said.

Shoots on the vine should be spaced at four or five inches. Workers will remove more shoots as needed in mid-April. The plants grow four feet apart in long rows with eight feet between them. All of the pruning and the spacing is carefully calculated.

Wright is passionate about growing grapes to the point of obsession, Butler said.

“That is what you need to grow the best grapes,” he said. “We are as good as any wine in North Carolina and better than many.”