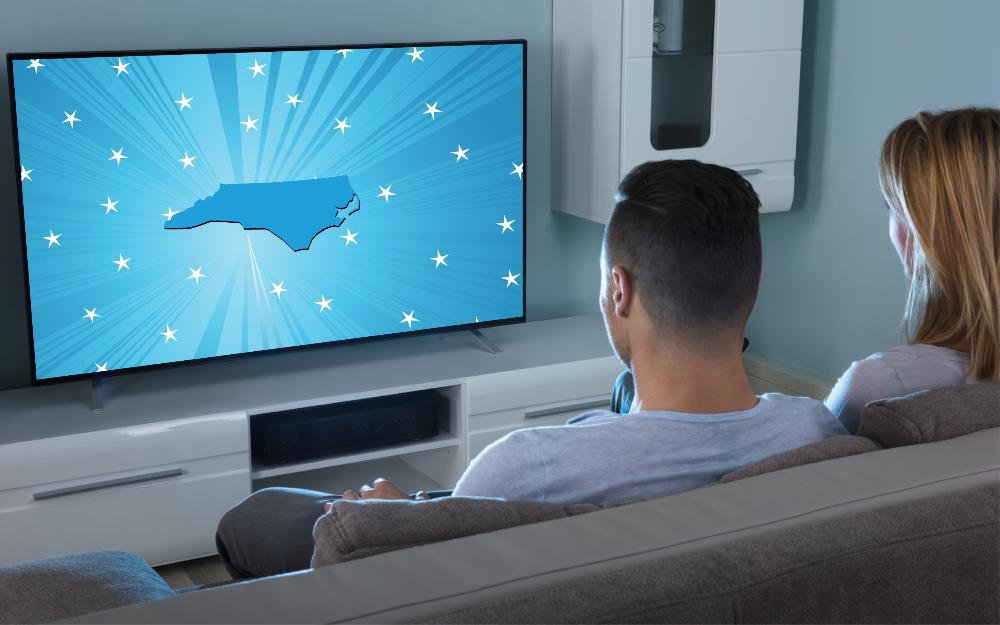 They say we're living in a new "Golden Age of Television." Thanks to dozens of streaming services and hundreds of channels, people can access an almost infinite universe of entertainment using only their remote control.

You want comedy? Drama? Reality? Romance? Horror? Science fiction? It's all available with the push of a button.

And with more shows and series being produced than ever before, localities are learning that this new "Golden Age" has real value in terms of revenue. New York City and Hollywood aren't the only entertainment games in town anymore.

Fortunately, North Carolina has been hip to this fact for a long time.

When it comes to movie and TV production, North Carolina knows how to stay busy.

And the busiest spot in the state has to be Wilmington, which really heated up (pun intended) in 1983 when producer Dino de Laurentiis came to the region to produce the film, Firestarter.

According to the Wilmington Regional Film Commission, since then, the region has hosted 138 feature films and 162 television productions.

The state continues to offer attractive incentives through the North Carolina Film Office, which boasts that "over the past 38 years, more than 1,000 feature films and television series (and numerous documentaries and commercials) have been made possible" with its assistance.

Maybe big numbers like that make you skeptical. Maybe you're the kind of person who needs proof. Lucky for you, we've prepared a list.

It's only a tiny sampler of the Tar Heel State's TV production, but it's a diverse collection of everything from classic courtroom drama to high-concept sci-fi thrillers.

But before we present this list of 15 Television Shows Made in North Carolina, there are two important things you need to know.

1. The Andy Griffith Show (1960-1968) was NOT shot in North Carolina. Though all 249 episodes of the classic series take place in the fictional town of Mayberry, North Carolina, the production was based in California. All those rustic, woodsy areas where Andy and Opie would wander with their fishing poles? Those were shot just north of Beverly Hills.

2. The massive hit Outer Banks on Netflix is NOT shot in the actual Outer Banks.  That show is made in South Carolina. I guess we could be bothered by that, but we shouldn't complain too loudly, since there's a new show called Florida Man that was shot in Wilmington.

Now that we've got that out of the way, here's our list of 15 Television Shows Made in North Carolina...

Premise: An American horror series. Sheriff Buck is a bad, bad guy whose power-base is backed by apparent supernatural powers, which he uses to manipulate people to “fulfill their potential”” and make life-changing choices.

Premise: "An ex-con assumes the identity of a murdered sheriff in the small town of Banshee, Pennsylvania, where he has some unfinished business."-IMDB

Premise: "Four friends in a small coastal town help each other cope with adolescence." -IMDB

Premise: "Many years after he turned his back on his hometown, a burned-out major league ballplayer returns to teach Physical Education at his old middle school." -IMDB

Premise: "A bipolar CIA operative becomes convinced a prisoner of war has been turned by al-Qaeda and is planning to carry out a terrorist attack on American soil." -IMDB

Premise: Reality TV show about a towing and recovery company in the Raleigh suburb of Wendell.

Premise: "Ben Matlock is a very expensive criminal defense attorney, who charges one hundred thousand dollars to take a case. Fortunately, he's worth every penny, as he and his associates defend his clients by finding the real killer." -IMDB

Premise: "Half-brothers Lucas and Nathan Scott trade between kinship and rivalry both on the basketball court and in the hearts of their friends in the small, but not so quiet town of Tree Hill, North Carolina." -IMDB

Premise: "Fifteen years after a permanent global blackout, a group of revolutionaries seek to drive out a tyrannical militia that's taken over the former United States of America." -IMDB

Premise: "Ichabod Crane is resurrected and pulled two and a half centuries through time to unravel a mystery that dates all the way back to the founding fathers." -IMDB

Premise: "A marine biologist, an insurance salesman and a teen-aged boy find their lives fundamentally changed by the emergence of a new, and often dangerous, species of sea life, while government agents work to keep the affair under wraps." -IMDB

Premise: "Swamp Loggers is an American reality television series on the Discovery Channel that follows the crew of Goodson's All Terrain Logging as they log the swamps of North Carolina." -IMDB

Premise: "Abby Arcane returns home to Marais, Louisiana to investigate a deadly swamp-borne virus, only to discover the dark, terrifying mysteries of the swamp." -IMDB

Premise: The residents of the fictional small town of Chester's Mill struggle to survive and find answers about a massive, transparent, indestructible dome that suddenly cuts them off from the rest of the world.