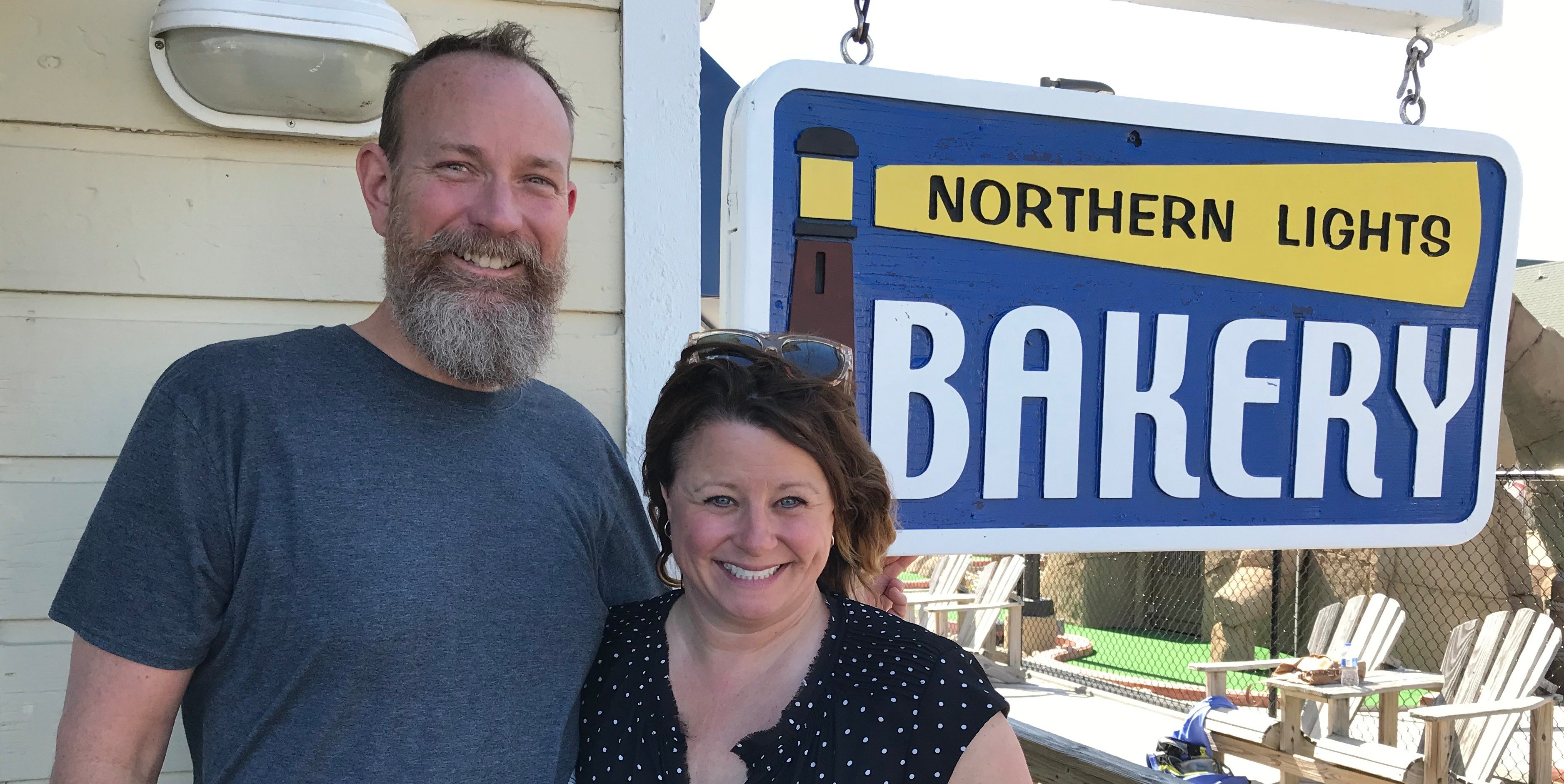 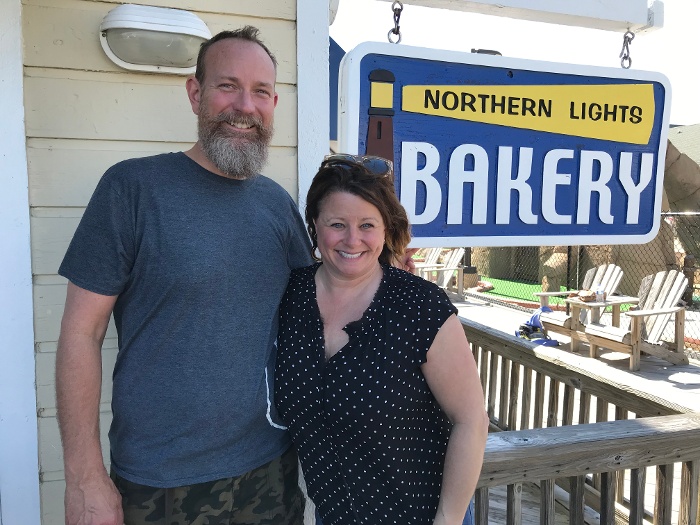 Northern Lights Bakery has been in Corolla for 25 years.  Mark and Kristina McCleary have owned it since 2007, when a vacation to visit friends brought them to Corolla for the first time.

"We’d never been to the Outer Banks and we just fell in LOVE," she said. "We spent a week here and our friends said this place was up for sale."

"I never thought I would own a bakery, but we got reeled in and enticed by the Outer Banks. There was no looking back."

"What a learning experience. I can’t imagine not having done it. There was never any hesitation. There are days when it’s ‘What was I thinking?’ But I think all of the benefits of living here outweigh anything,” she said.

Summer days for the full service bakery and coffee shop start at 2 a.m.  As parents of two teenage daughters, going to bed between 6 and 7 p.m. can be "a little challenging."

But their girls have adjusted. 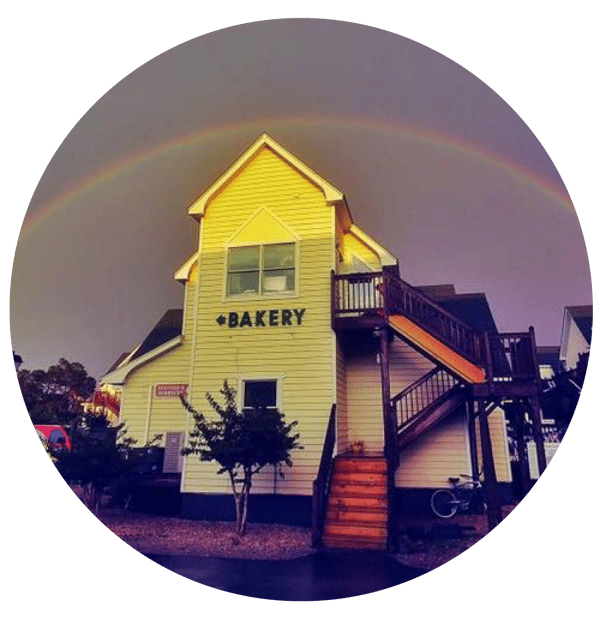 “There was no looking back.”

The couple started a long way from the Outer Banks.  Mark is from Tucson, Arizona and Kristina is from Calgary, Alberta, Canada.  They met in Scottsdale, Arizona while they were both working for Fairmont Hotels.

Kristina graduated from the Southern Alberta Institute of Technology (SAIT) in Calgary with a degree in Baking and Pastry Arts, before adding a six month pastry course in Vancouver, British Columbia.  She baked at the Fairmont Banff Springs Hotel from 1996 to 2001, before transferring to the Fairmont Scottsdale Princess.

Mark was a chef at the Princess for eight years. He had moved into produce sales for the company when the couple started looking to open something of their own.

Mark remembers the struggles of his early career: “I had sort of done everything and was not going to be able to get any higher up and we wanted to do something different.”

Kristina had been a stay-at-home mom for their two daughters for five years and wanted to go back to work.  A bakery was not in the plans.

“Hotels pay you well. You get good benefits," Kristina said. "Bakeries are too much work."

Their daughters were 3 and 4 when they came to Currituck County for their one week vacation.

"We came here, they loved it - we loved it," Kristina said. "We packed up two cars, a U-Haul, a couple of cats, dog, kids and moved across the country.  We came in October for a week and six months later we were here. We had two months to get this place up and running."

They kept the bakery's original name and opened on April 30th, 2008.

“The biggest thing I’ve learned working here is just when you think you are going to give up, just keep going and you‘re good.  There are moments when I think I can’t do this anymore and I just keep going and all of the sudden something breaks through. People give up way too easily on most things in life.  It has been an incredible learning experience. Don’t give up. I know that’s cliche. Just keep going and you will be fine,” 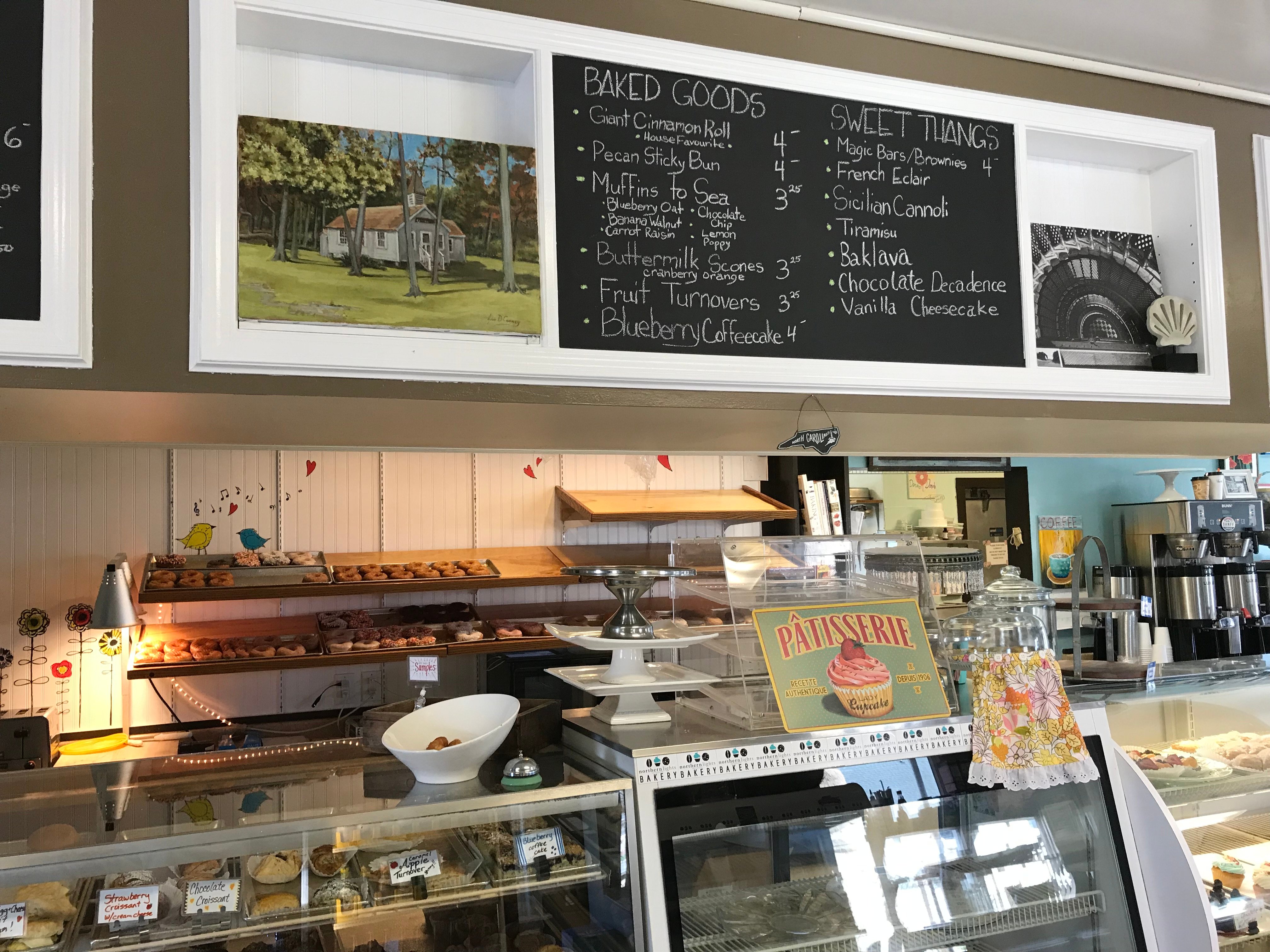 During the summer, Northern Lights Bakery is open most days from 7am to 5pm, but as Wednesday, Thursday and Friday evenings are their busiest, they are often open until 8. The bakery is also open during spring and fall seasons, but generally stays closed from November through March.

“We have four months to make money here and there are certain things that have to happen or we couldn’t pay our rent in the winter,” Kristina said.

The McClearys feel the privilege and responsibility of creating lasting happy memories for families.

“It’s been cool to watch people’s kids grow up," said Kristina. "This is a very unique business to own in regards to having people come the same week every year.  It’s one of my favorite things about working here. Having all of these familiar faces come in."

“All the sudden they are in high school," Mark said. "I met them when they were four or five when they said ‘I want a cookie.’ and now they say ‘I want a job.’"

"One of the coolest things about us is that the stuff you get here you won’t get anywhere else," Kristina said. "I make my own eclairs. I make my own cheesecakes. I make my own pies. I get a sense of satisfaction when people come in here and say ‘This is the best (whatever) I’ve ever had.’”

Mark said that one of their regulars has a son who can’t wait to go to the bakery because ‘it tastes like vacation.’

“We go to the beach every day without fail.”

"I lived in Santa Cruz, California for two years and had my heart set on living near the beach - the ocean," Kristina said. "We actively surf and wakeboard and get in the water.  I think that is what really keeps me here. Every time I go over that dune and see that, it’s amazing to me that after ten years of looking at it, every day it’s different."

"We go to the beach every day without fail," said Mark.

Moving to Corolla meant that Mark took a large pay cut.  When asked about what makes the lesser salary and the hard work and long hours worthwhile (besides the beach), Mark said, “It’s the community. I’ve never considered myself a small town kind of person but I really appreciate the community we have.”

“That sense of connection... I made this and you are really liking it. That’s cool. The idea that we are part of people's vacation? I really like that.”