Will You Escape the OBX? - Codebreaking and Clue Hunting in Currituck 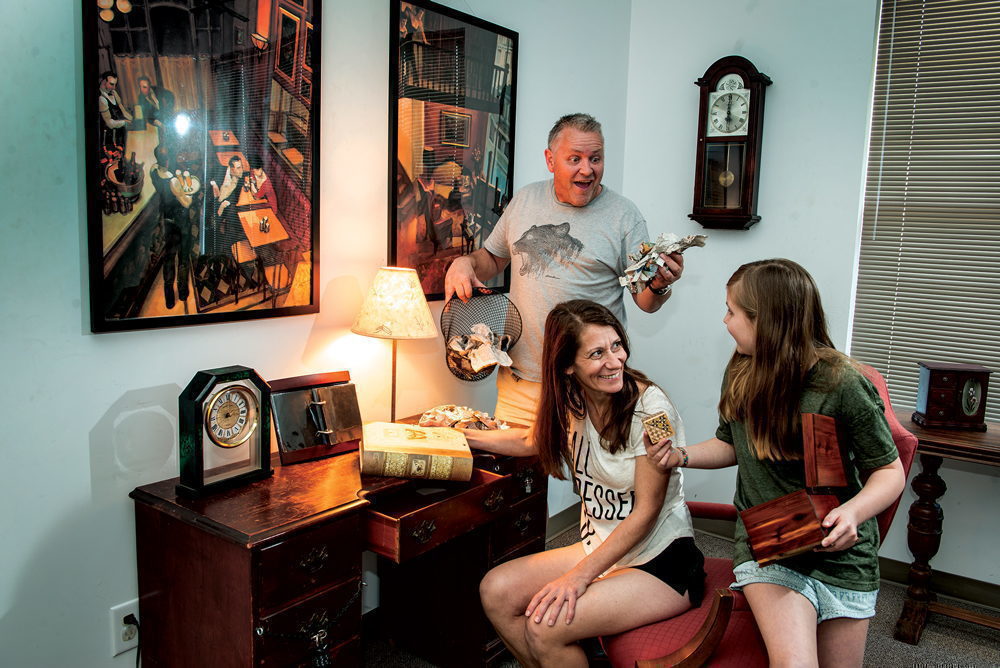 Janet Willis has literally made her dreams come true.

When she decided to open Will You Escape the OBX? in lower Currituck, some ideas for room themes and tasks came while she was sleeping.

“There are things that literally came to me in a dream," Janet said. "I keep a pad of paper and a pen next to my bed so I can write ideas down when they come to me. Sometimes I can make it happen and sometimes I can’t.”

Janet, 55, worked in a number of medical related fields before deciding to go back to school to get her nursing degree. After graduation, she worked at Sentara’s cardiothoracic surgery unit, driving the hour and fifteen minutes from her home in Grandy to Norfolk for 12-hour night shifts. The job was rewarding but high stress.

One day for fun, she joined a group of fellow nurses on a trip to an escape room in Virginia Beach.

“I fell in love," she said. Janet said that after a long work shift, she appreciated hearing laughter. She enjoyed it so much that she went back with her daughter.

The more she thought about it, the more she realized that, "We truly need something like this in our area.”

Solving the Puzzle of Starting a Business

Janet decided that running her own escape room business was what she wanted to do.

“[Will You Escape the OBX?] was a step of faith," Janet said. "We started with minimal funds, but it took off like a shot and we are still going strong."

She said the hardest thing about getting the business off the ground was finding a “fairly decent size building with multiple rooms.” Janet could only find two locations in lower Currituck that were viable. Ultimately, she chose a suite of rooms in The Harbinger Center on Caratoke Highway in Point Harbor. 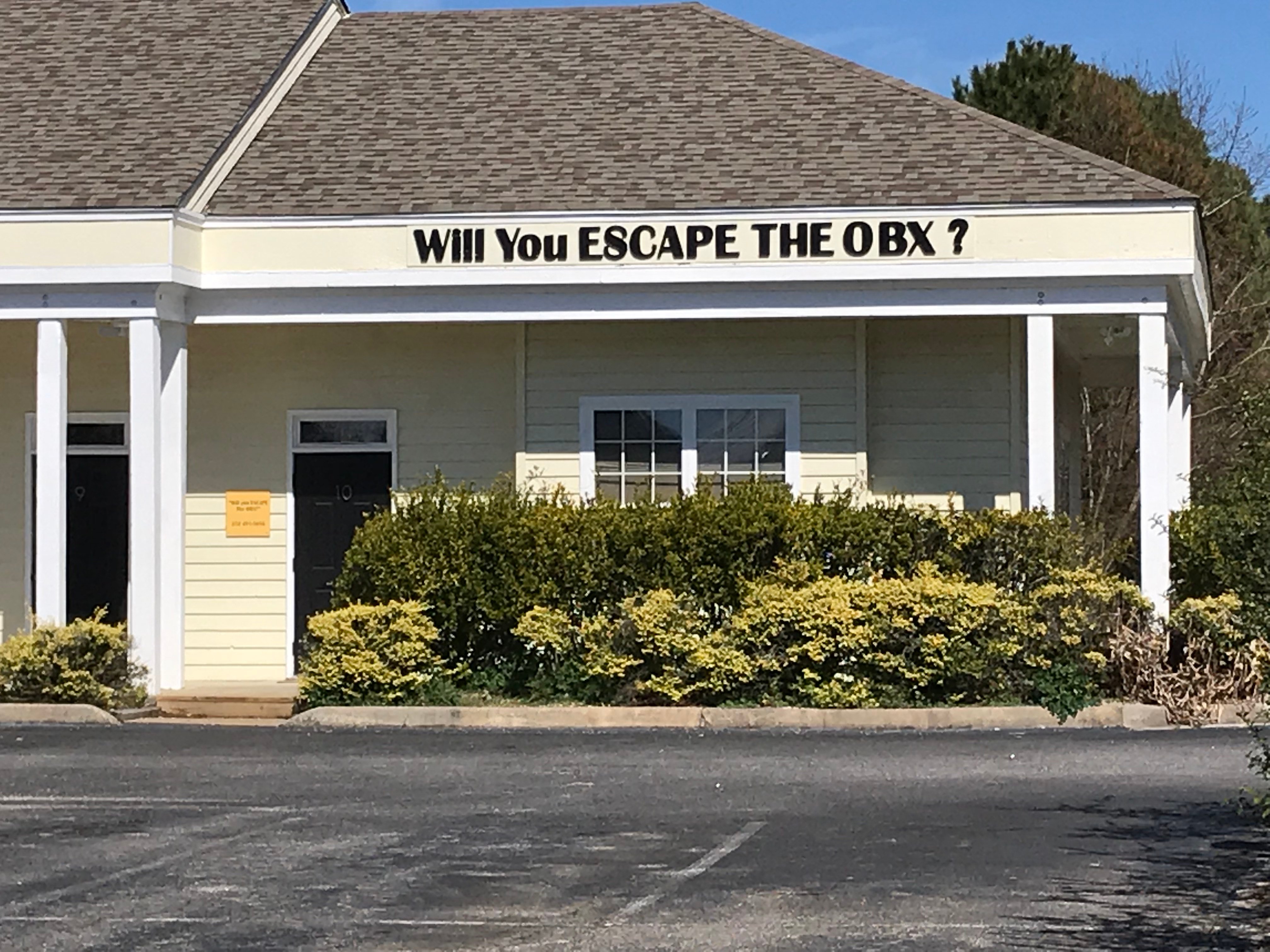 A small crew of family and friends helped her get going. Her daughter, Olivia Owens Doxey, has been her right-hand since the start. Bobbi Scott, a friend from Grandy, did the basic painting of the 12-foot ceilinged rooms. And retired Currituck High School art teacher, Jimi Sutton, painted the murals featured in the entrance. Most of the rest of what you see was built and painted by Janet.

A third-generation Currituck native, Janet admits to spending a lot of time with her father growing up, which helped her become pretty handy.

She also works hard on keeping the experience fresh for visitors.

“We have very unique rooms and we create them ourselves," she said. "We think out of the box.” 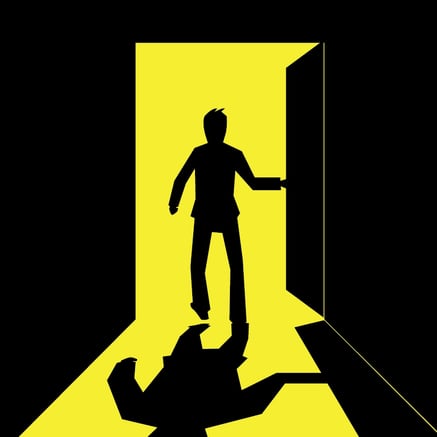 SO WHAT ARE ESCAPE ROOMS?

"An Escape Room is also known as an Exit Game, Escape Game or Room Escape Game.

It involves placing a team of player(s) in a dramatic situation inside a closed space (room), which they have to resolve by finding clues, solving puzzles and taking part in some activities within a specific time, usually 60 minutes.

Despite the name, it is not universal for the theme to be escape-based. Players maybe called upon to solve a crime / murder or even save a fictional character or find something.

Many Escape Rooms don’t actually ‘lock’ the participants inside a space and participants are free to leave the game, any time they want."

Lure Them In and Lock Them Up

Will You Escape the OBX? opened in May of 2016 with four rooms. This summer (2019) will be her fourth season. Those first four rooms have since become five, with the potential for expanding to seven coming fairly soon.

Room themes at Will You Escape the OBX? are changed often. There have been 13 different themes since Janet started.

Will You Escape the OBX? welcomes 300-400 visitors per week in the summer. In the winter, those numbers drop to an average of 25 a week. By requiring reservations online, Janet makes certain that no group is disappointed during the busy summer season. In the off-season, taking reservations gives her the luxury of only scheduling staff when there's a booking.

Currituck High School student and Grandy resident, Grace Wilaby helped out this past winter. During the summer, Janet adds three or four high school or college students to supervise the escape rooms.

Unlike many similar businesses, Will You Escape the OBX? is completely family and pet-friendly. Dogs that are house-trained are welcome. Many other escape rooms will not allow children under a certain age, but Janet wants to encourage parents and their children to spend time together, laugh together and enjoy each other's company.

Will You Escape the OBX? welcomes couples, small families and large families. Sometimes family reunions will book two different rooms, split into groups and try to solve both rooms to see who gets the best time.

Last year, Currituck’s YMCA brought groups of 20-30 children at a time to the age-appropriate rooms throughout the summer. Groups of local Boy and Girl Scouts have visited and companies regularly use escape rooms for team building.

At Will You Escape the OBX? rooms take 45 to 60 minutes to complete. Current themes include:

• The Office - Rated very difficult and looks simple when you walk in. “People think they have it but then it kicks your butt,” Janet said. It's the most popular.

• The Enchanted Garden - Medium to easy with a firm four person limit.

• Under the Sea - Rated easy and family friendly. Features 900 pounds of sand!

• The Wacky Wizard - Easy to medium level. Includes a lab and potions to concoct.

Janet has two projects underway, a multi-room, multi-level challenge titled “Hidden Secrets,” that will allow 90 minutes for completion. She would like to have it ready by summer, but says it will definitely be open by the fall.

“The Adventure” will be unveiled at Just a Little Hocus Pocus in Moyock this April. The mobile escape room is named after one of the ships in Blackbeard’s fleet.

When the Elizabeth City Shrine Club put their longtime float “The Buccaneer” on the market, Janet immediately saw the potential for turning the 28-foot school bus into a traveling escape room.

The Buccaneer will be pirate-themed and already has contracts for Kid’s Days at Whalehead in Historic Corolla on Thursdays as well as the North Carolina Aquarium on Fridays through Mondays on Roanoke Island in Manteo. It takes about two and a half hours to set up and will take 45 minutes to complete with mostly easy elements but a few harder ones that parents may need to help their kids figure out.

When it comes to escape rooms, Janet Willis is locked in and isn't in a hurry to get out.

Visitors keep coming and she hasn't begun to tire of the enjoyment and laughter she brings, particularly to families. It's a creative business that allows her imagination to set her product apart. Among escape rooms, Janet said, “We are unique.”

It also helps that Janet has managed to create a business in Lower Currituck without going into debt. For that, she is quick to give God credit.

“God knows what he's doing," she said. "We’ve been very fortunate and blessed.” 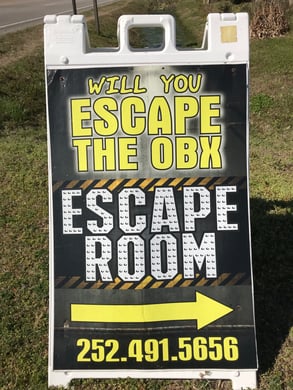 Previous Story
← Outer Banks Elevator: Steady Success in an Up-and-Down Business
Next Story
INFOGRAPHIC: What You Need to Know About the Mid-Currituck Bridge →