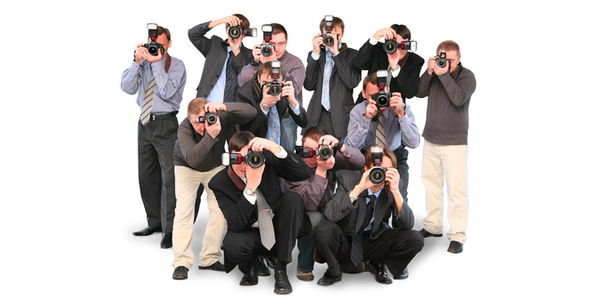 I’m not a fan of dirty laundry.

Remember back in May when the internet was buzzing about the Bill Gates "secret love nest" in Corolla?

The story broke right after the billionaire’s divorce made headlines. Apparently Bill vacationed in the Outer Banks with an old girlfriend while still married to Melinda.

The house he rented isn’t that far from my own.

So how did I feel when I found out that one of the richest men in the world was chilling out just a few blocks away?

The same way I felt before I found out… that other people’s business is none of my business.

But not everybody feels the same way, especially when it comes to famous people.

Celebrity gossip is still a booming market. Supermarket tabloids are alive and well, entertainment channels devote hours to who’s dating who and the internet has taken everything to a whole new level.

But there are millions of people who can't get enough of it.

I suppose people living in Los Angeles and New York City get used to packs of paparazzi chasing celebrities at restaurants and nightclubs. But it’s rare that Currituck County gets a shout-out in the New York Post, complete with a sensational, schlocky headline.

It’s not like celebrities are rare in the Outer Banks, we’re just polite enough to leave them alone. You might be surprised how many big stars spend their sunny days on our beaches.

Hundreds of thousands of people come here every summer to soak up the sunshine and enjoy the salt air. Some of those people happen to be movie stars, models, musicians and big-time CEOs.

How can you tell if someone is famous?

It can be hard to spot stars in the crowds, especially if they’re wearing sunglasses, floppy hats and sunscreen.

Most celebrities come here to enjoy time with their families. They don’t want to be recognized. But once in a while they let their guard down.

Sometimes you find yourself up close and personal with a genuine celebrity.

You do a double take at the seafood market. That woman who just ordered tuna steaks? Was that Heidi Klum?

You swear you just saw Bill Murray drive by on the 9th hole at Kilmarlic.

Or the guy walking down the beach in the bucket hat? He used to be on Saturday Night Live, right?

What should you do if you encounter a celebrity in the wild?

Funny enough, the rules for dealing with an out-of-town celebrity are the exact same as the rules for interacting with our most famous residents: Corolla's wild mustangs.

So it doesn't matter if it's Kevin Costner, Katy Perry or Rambler the Stallion, follow these four rules and you can't go wrong...

Celebrities may get aggressive if approached by non-celebrities. Don't try to touch them, pet them or poke them. If you start a conversation, do so with at least 50 feet of distance between you and the celebrity. Celebrities may seem docile and friendly, but most are from California so they will always be unpredictable and potentially dangerous.

For most people, the first thing they want to do if they see Tom Cruise walking on the beach is toss him an apple or a carrot. Please don’t do this. Celebrities are usually on a very strict diet and most of them can’t handle eating raw fruits or vegetables that are not blended into a smoothie.

If you spot a celebrity on the beach, that celebrity is likely on vacation. Don’t ask them to repeat famous lines from movies or ask them to sing a few lines of their biggest hits. The last thing YOU want to think about while on vacation is work, so we shouldn't expect celebrities to entertain us when they're "off the clock."

Some bulky action stars like John Cena or Dwayne “The Rock” Johnson may look like they can handle your weight, but jumping on their backs is a bad idea. It’s rude, illegal and will likely result in serious injury and/or property damage.

Stick to those rules and I think you’ll be okay!

Or, you could do what I do and not worry about who’s famous and who’s not.

If you want to just sit back, relax and enjoy the sun, the sand and the surf... I’ll save you a beach chair.