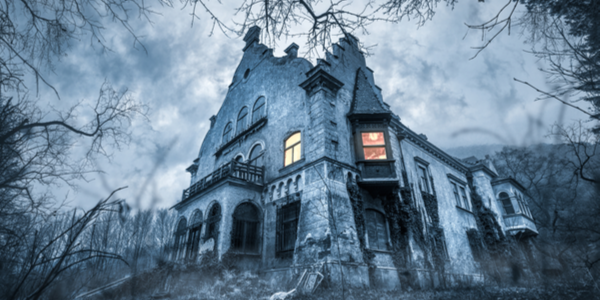 The world is a scary place.

Just turn on your TV or surf the internet and you’ll find a million horrible things to keep you up at night. Serial killers. Man-eating sharks. Demonic possession. The Kardashians.

But when I was a kid, there were only three things that scared me to pieces.

Let’s call them the "Unholy Trinity."

To me, there was nothing more terrifying than dark basements, abandoned houses and the woods at night.

Since basements were part of the house, they were an ever-present danger. No kid liked going down to the basement.

Even if your basement was well-lit, there was always the possibility of that light going off. The bulb could blow, you could lose power or a mean-spirited older sibling could hit the switch at the top of the stairs.

Back then, ending up alone in a dark basement was just about the worst fate I could imagine.

Abandoned houses just sat around looking evil. Luckily, they were easier to avoid than basements. I could cross the street or take a detour around the block to bypass them altogether.

The woods were more complicated. Tons of fun in the daylight, but once the sun set, all bets were off. Nothing good ever happened to a little kid alone in the woods at night.

Thinking about those places now, there was no real danger. Most of the unspeakable horror was in my head. But that's the thing about the human brain, all it needs is a little darkness and some funny noises to get spinning. Our imagination takes care of the rest.

Every knock, thump and creak becomes the footsteps of a bloodthirsty killer. Blowing leaves become the movement of a werewolf on the prowl. And the loose vinyl siding banging in the wind somehow becomes the noise of a zombie home invasion.

In time, we outgrow those fears.

We learn that the scariest thing you can find in a basement isn’t the boogie man or an evil clown, it’s six inches of standing water on a holiday weekend when you know the plumber is going to charge you $50 just for picking up the phone.

These days, I’m more concerned about my blood pressure than Dracula attacks. I'm less worried about the Thing Under the Bed than I am about the Slow Drip Under the Sink.

But no matter how old or brave we get, we still fear the unknown.

And when we don't know exactly what's out there or waiting around the corner, we make something up. We become the kid at the top of the stairs who doesn't want to go down to the basement. Our imagination fills in the blanks with worst-case scenarios and make-believe monsters.

Weird headaches? Google it. Must be a brain tumor. Car won't start? Gotta be a crack in the engine block. Spouse's phone goes straight to voicemail? Kidnapped for sure.

I know plenty of so-called grown-ups who spend way too much time and energy being afraid of what MIGHT happen and worrying about what horrors the future holds. In my opinion, that makes about as much sense as thinking that there's a mummy living in your attic.

The world is a scary place.

We're already dealing with a supply chain crisis, rampant inflation and a brand new season of The Bachelorette.

Why stress yourself out by inventing new things to be afraid of?

Have a Happy Halloween and thanks for reading!