We’ve always known that Currituck County is a great place to live, but new research from the U.S. Census Bureau proves that we’re not alone.

Currituck is among the fastest growing counties in the state and boasts the largest population of non-native residents.

Overall, the Census Bureau’s data shows that people are relocating to North Carolina in impressive numbers.

Carolina Demography also points out that some of the biggest population boosts are happening in unexpected places. While most of the growth over the last six years or so was focused in bigger counties like Wake, Mecklenburg and Durham, it has shifted more broadly across the entire state. 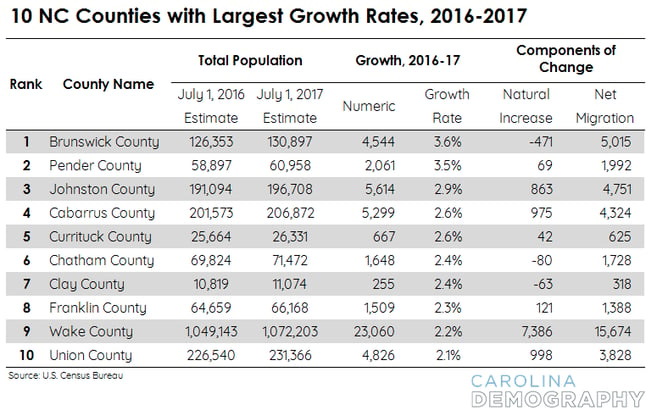 Brunswick County and Pender County top the list of fastest growing North Carolina counties. Both are located on the coast, close to Wilmington. The big-city adjacent counties of Johnston (Raleigh) and Cabarrus (Charlotte) take third and fourth.

And since 2010, the population of Currituck County has increased 12%, twice as much as its closest neighbors Camden (6%) and Dare (6%).

North Carolina is a migration destination

64% of North Carolina’s population growth since 2010 is due to net in-migration (people moving to the state).

In 2016, North Carolina received an estimated 86,200 net in-migrants, making it the largest year of in-migration for the state since the 2010 Census. The only other states with higher in-migration numbers were Florida, Texas and Washington.

Recent estimates from the American Community Survey also indicate that 43% of North Carolina’s population was not born in the state, which is up from previous five-year estimates.

While 43% is the average for the entire state, 18 individual counties can boast that more than 50% of their residents are non-native.

Currituck County is ranked number one on that list, with 75% of its population born outside of the state.

But it also means that more and more people are choosing to come to Currituck County.

The State Demographer projects that the state will have 10.6 million residents by 2020.