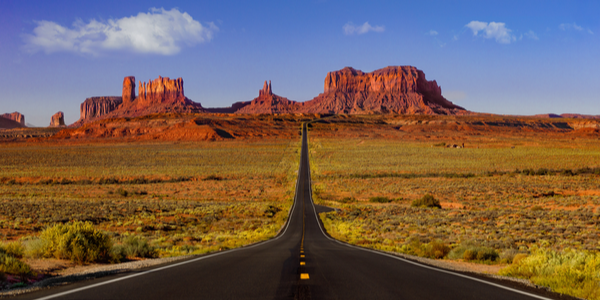 End of the Road

America is a big place.

I had lunch last week with a colleague who spent most of the summer driving across the country in an RV. He made his way through something like 32 states.

That’s a lot of road.

And according to him, there were also plenty of cornfields, cows and casinos along the way.

But he said it was the parts without people that really left an impression.

He drove for hours through sprawling deserts, rolling hills and endless farmland. No houses or people. Nothing but acres of open space.

It makes you wonder why people end up so close together.

Did you know that Los Angeles County has more people than the state of Wyoming? Its population is bigger than Maine. More residents than Alaska or either of the Dakotas.

Why do people do that? Pack themselves into apartment buildings and spend hours commuting in traffic?

I know big cities have all the jobs and culture and restaurants. It’s nice to be near major airports and sports teams and schools. And everybody loves perks like subways and 24-hour taco trucks.

But he showed me some incredible photos. Real picture postcard stuff. Talk about waking up to a view…

There were mountains and mesas surrounded by big blue sky. Gorges and canyons and cliffs. Sunsets and rainbows.

The kind of majestic, awe-inspiring images you’d see in National Geographic or on computer screensavers.

People usually love that stuff. But the only ones taking in the view were a couple cactuses and some rocks… and they seemed unimpressed.

Granted, this was the middle of the desert in July.

It’s hard to appreciate the scenery when you’re melting.

My colleague didn’t mention passing much residential construction. That makes sense. I can see how neighborhood developers might have a hard time turning 120-degree days and backyard rattlesnakes into selling points.

The first time a real estate agent even said the word “scorpion” I’d be on the first plane back to the East Coast.

Somebody must want to live there.

You always hear people say "there's someone for everyone," so maybe it's also true that there's "someplace for everyone."

Take Currituck County. Our population has increased almost 20% in the last decade. At this rate, we’re going to reach our 2035 population estimate.... five years ahead of schedule!

There must be something about us. Why do people keep moving here?

I've always thought it was the winning smile and charming personality of the Economic Development Director, but my wife says no, that's definitely not the reason.

Does it have something to do with the exceptional quality of life, the low taxes or the breathtaking natural beauty of the Outer Banks?

But you’d have to ask the people.

I talk with a lot of them, but haven’t chatted with everyone yet.

The best I can offer is my own expert opinion. I say “expert” because I was one of those people who made the decision to move here.

America is a big place. I could have ended up anywhere.

But I was lucky enough to be able to choose Corolla as my "end of the road."

It felt like home. It's incredible place to live and work and... not half-bad to look at.

But I'm excited about the growth. Not only because it's my job, but because smart growth can lead to great things.

And even though big changes are happening here, some things always stay the same: the sense of community, the connection with nature and the quality of the people.

But maybe the most important thing that will never change?

The fact that there never has been, and never will be, scorpions in the Outer Banks.