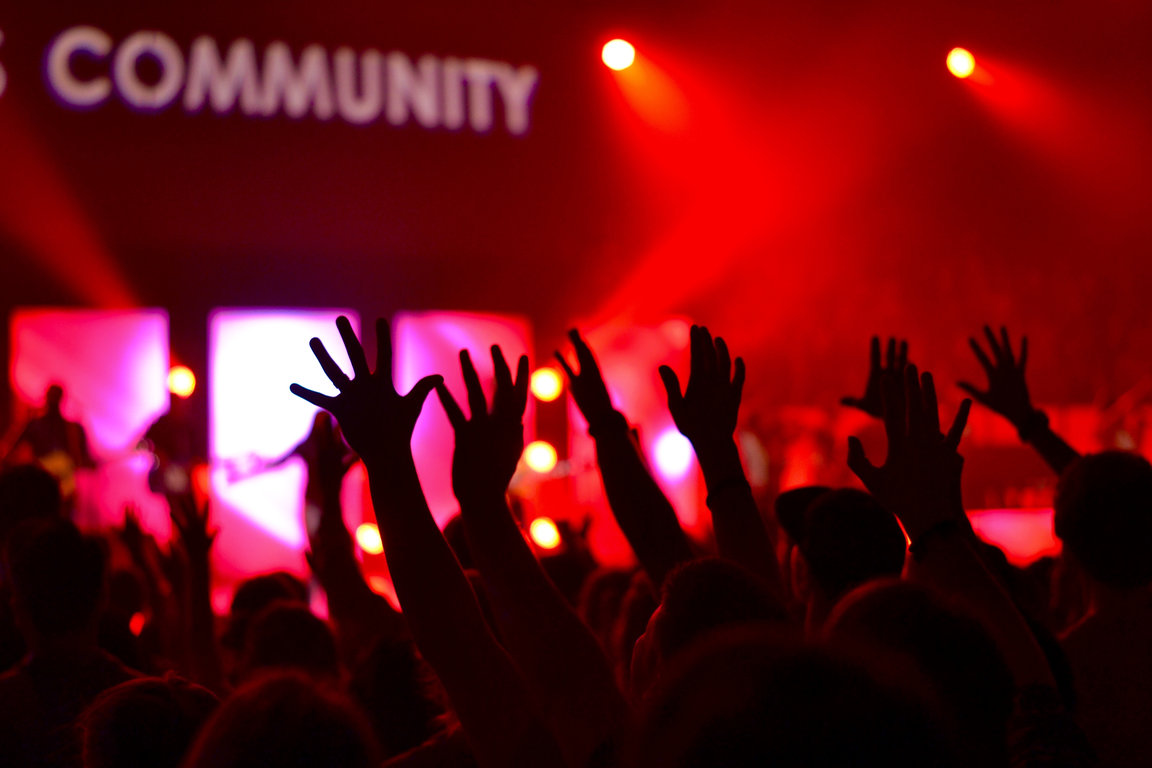 5 Things Every North Carolina Business Needs to Know About Crowdfunding 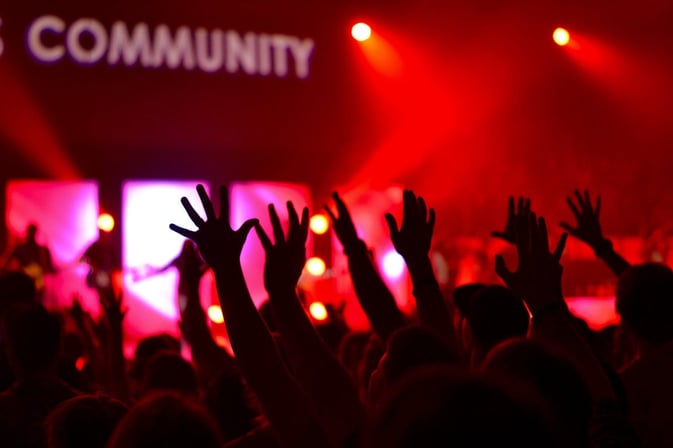 The Future of Business Financing Has Arrived and A New Law Radically Changes the Way People Invest in Startups and Companies Raise Money. Are You Ready?

Every business begins with an idea. But not every idea becomes a business.

There are a million reasons why a startup or small business might not get off the ground, but one of the biggest reasons is that infamously treacherous minefield every entrepreneur needs to navigate, also known as “financing.” It doesn’t matter if you’re baking cupcakes in your own kitchen or manufacturing high-tech machine parts for the Department of Defense, money is the fuel that drives all business forward.

So where do you get it?

Most small business owners follow a similar financing path that starts with family and friends. Once that “inner circle” has been tapped, the next step has traditionally been bank loans. But convincing a bank to lend you money requires a mountain of paperwork, a comprehensive business plan and usually some sort of collateral or cosigner. 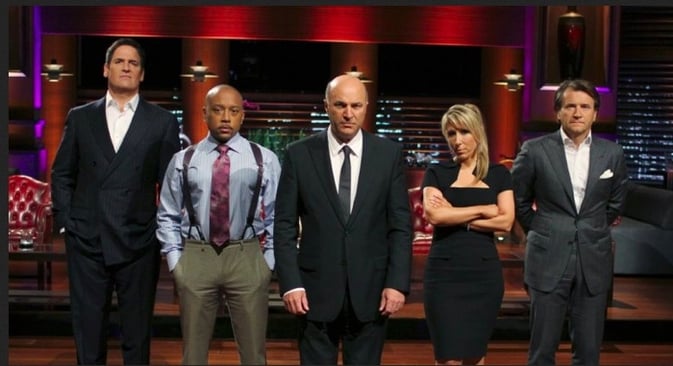 Beyond the bank are outside angel investors and venture capitalists, a group that most entrepreneurs likely picture as a panel of skeptical “Shark Tank” millionaires who sit under dramatic lights with their arms folded. Think of it as the raising capital equivalent of gladiator combat. Those who succeed gain fortune and glory. Those who fail, get eaten by sharks.

Yes, finding funding for your small business is hard work. But if you’re looking for money to launch or expand your business in North Carolina, there is another option.

Crowdfunding has emerged as one of the fastest-growing sources of capital for startups and small businesses. You may be familiar with online platforms such as Kickstarter and GoFundMe, which changed the way creatives and charities raised funds. But now, thanks to recent federal and state legislation, there is a new universe of opportunity for small businesses to raise the money required to turn their dreams into realities.

If you’re a North Carolina business owner, here are 5 things you need to know about crowdfunding to raise money for your business…

Crowdfunding changes the way people can invest in your business.

Broadly defined, crowdfunding is “funding a project or venture by raising many small amounts of money from a large number of people, typically via the Internet.” According to Crowdfund Insider, crowdfunding allows “average citizens to contribute capital to companies without those companies having to deal with the typical bureaucratic overhead of selling stock on typical stock exchanges.”

There are two main types of crowdfunding: Donation and Investment. 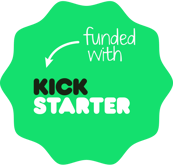 Rewards-Based Crowdfunding is when a company offers current or future goods or services for an individual contribution. You’ve probably read stories of filmmakers and musicians raising money via platforms such as Kickstarter. Different perks are offered according to the level of donation. Technology companies might use this method to raise funds to manufacture a product or develop an app for an invested audience of early adopters.

Charity Crowdfunding is a pretty straightforward way for the public to contribute to a nonprofit or cause. Nothing is promised or expected in return.

Debt Crowdfunding is lending money to a business or individual with the understanding that the investment will be repaid with interest.

There are two types of investors: accredited and non-accredited. 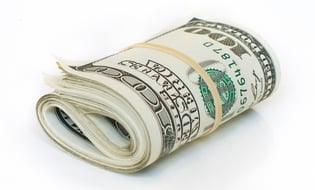 There are two crowdfunding systems: federal and state.

On April 5, 2012, President Obama signed the Jumpstart Our Business Startups Act (JOBS Act) into law. The Act was intended to encourage funding of small businesses in the United States by easing securities regulations and enabled non-accredited investors to invest in companies via crowdfunded offerings.

But it took almost four years after Obama signed the 2012 JOBS Act for the crowdfunding rules to take effect. During that time, many states drafted their own crowdfunding laws. On July 22, 2016, Governor McCrory signed a bill to enact the North Carolina Providing Access to Capital for Entrepreneurs and Small Business Act (PACES Act), which established a framework for the use of debt- and equity-based crowdfunding in North Carolina.

In a recent blog post, Steven Pennington with the North Carolina Department of Commerce’s Labor & Economic Analysis Division (LEAD)  wrote: “The PACES Act provides a mechanism through debt- and equity-based crowdfunding for businesses and small-time, unaccredited investors to more efficiently find each other.” 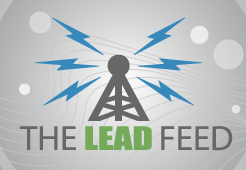 In The LEAD Feed post, Pennington also provided an excellent overview of how PACES works:
“Under the new law, North Carolina companies are allowed to raise up to $1 million during any 12-month period from investors who are North Carolina residents. Companies will be required to provide a business plan, financial information, and a description of risks. The 12-month limit can be increased to $2 million if the company has undergone a financial audit and makes that documentation available to prospective investors. During this 12-month period, non-accredited investors may invest up to $5,000 in any one company's offering.  Accredited investors are not limited in their investments, but their investments will count toward a company’s total 12-month limitation.”

So which crowdfunding system is right for your company? It depends.

The federal system allows businesses to solicit investors nationwide, while the North Carolina system is restricted to in-state resident investors only. If your company is looking to grow on a national scale, go with the federal system. And as an article in Entrepreneur suggested, small companies might find the state crowdfunding systems “a smart stepping stone to growth.”

Crowdfunding is more complicated than setting up a website and asking for money.

Raising capital for your business is still an awesome responsibility. While changes in crowdfunding laws have opened a brave new world of opportunity for citizen investors and startup companies, traditional financial risks remain. Regulation and compliance are more important than ever and are in place to protect both parties. 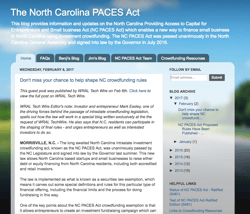 If you’re a North Carolina entrepreneur trying to figure out how to get started, start by reading this blog. It's packed full of expert information and insider advice about the North Carolina PACES Act and includes a mammoth collection of crowdfunding resource links.

Find professionals that you trust and engage them in every step of your crowdfunding process. It doesn’t matter how much money you’re looking to raise, get help. It’s hard to overstate the value of retaining financial, legal and marketing advice before counting your first dollar.