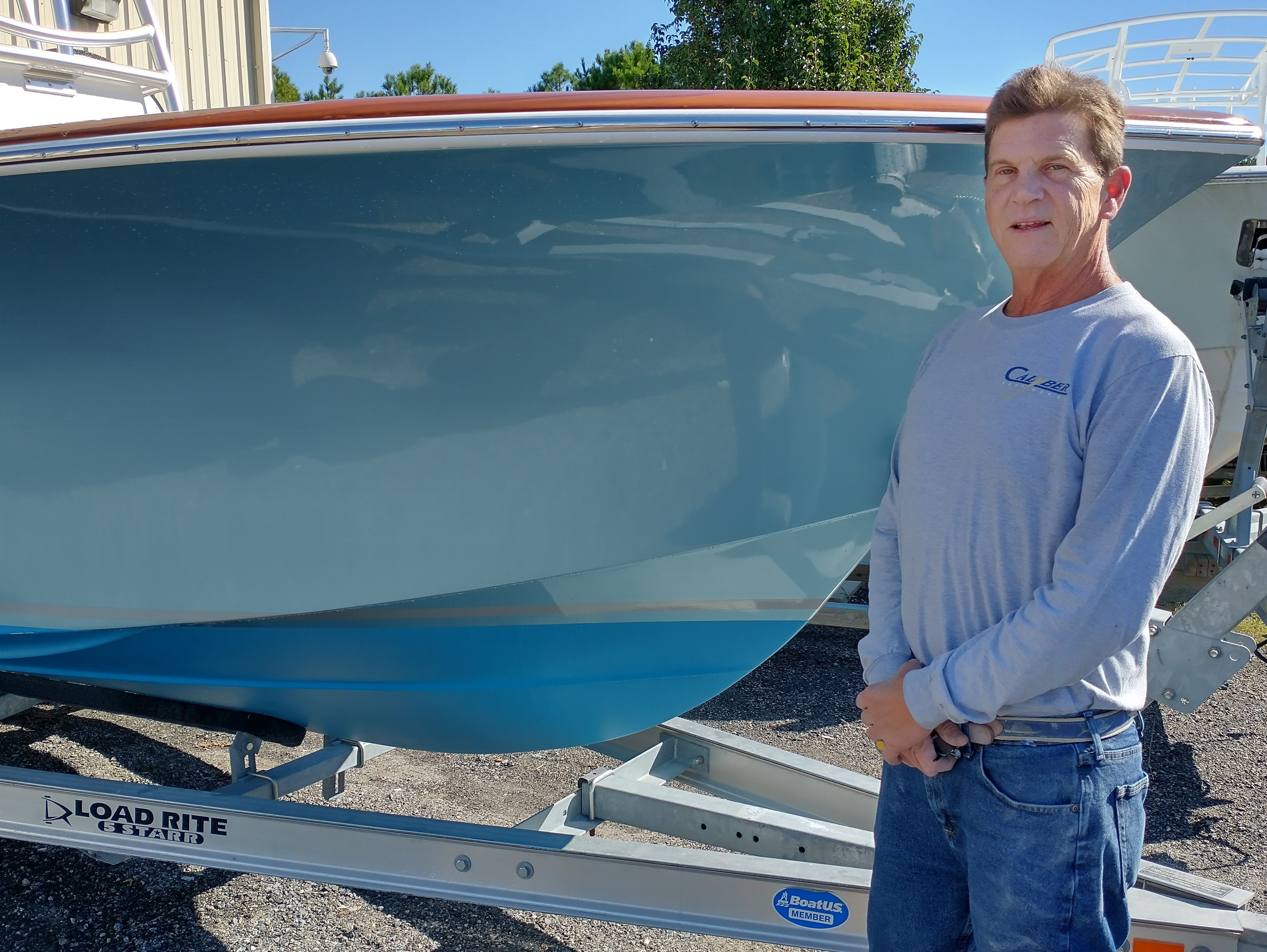 Currituck County boat builder Trevor Sherrick blends the tradition of the Carolina flare with innovation when he makes a 12-foot runabout look like a yacht.

“I’m  always trying to do something new and different,” Sherrick said from his large Calyber Boatworks shop in Powells Point.

Sherrick is the only production boat builder in Currituck County where the skills of adapting hulls to shallow water or modifying sailing vessels with car engines go back more than a century.

He and two employees, Ian Livingstone and Dalton Harn, are carrying on some of those traditions with a boat the size of a small skiff that has lines and designs that cut through rough water and at the same time looks like a vessel five times the length and 10 times the price.

“I wanted to do everything in miniature so the everyday man could afford the look,” Sherrick said. “It’s hard to keep everything proportional. That’s why people don’t build them.”

The 12-foot Lil’ Buddy, as he has tagged it, has the appearance of a 60-foot yacht in a photo when there is nothing else around it in the water to reveal perspective, he said.

A trimmed edge around the bow looks like it’s made of authentic teak wood. Instead, the trim is part of the fiberglass formed in the mold. His crew uses a marine paint that makes it look like teak trim. The added touch of faux seams enhances the realistic look. 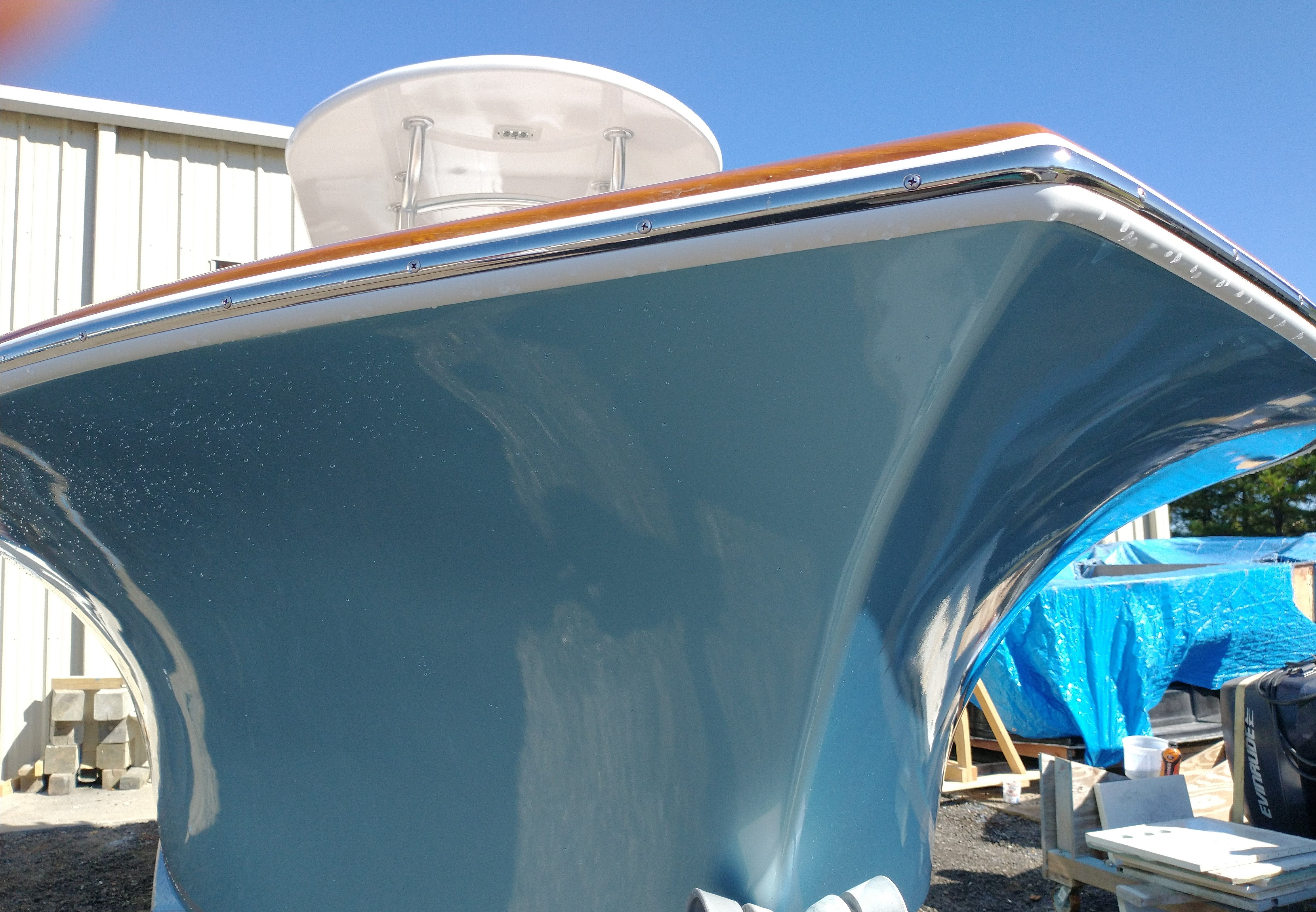 The boat comes in five colors, is fitted with a 30-horsepower outboard motor, travels 30 miles per hour and draws only 8 inches of water. It retails at about $25,000.

Many owners of larger yachts want a small runabout to travel in shallow water near the shoreline. The mini boats can be mounted on the deck near the bow.

Sherrick also builds boats of 19 feet, 21 feet and 29 feet, all with the distinctive Carolina flare and fine proportions. A 24-footer is coming soon, he said.

“Most beautiful lines of any boat on the market,” according to the social media post of one customer.

The world-renown Carolina hull features a deep V shaped bow that curves outward above the water line up to the deck. The sharp bow allows the boat to knife through head waves more smoothly. The flared hull keeps the spray below deck and the passengers drier.

The V-shape gradually flattens on the bottom toward the stern to help ride better in following seas, or waves coming from the behind the boat. It also rolls better on the water when anchored.

The flare design evolved in the mid 20th century on the Outer Banks. In 1960, Warren O’Neal built the Sportsman, the first vessel that featured all the design elements of Carolina boats including the sharp V bow, exaggerated flare, square stern and broken sheer line. O’Neal was known as the father of the Carolina flare.

One of O’Neal’s proteges was well-known boat builder Buddy Davis who operated a large shop in Wanchese and Elizabeth City for many years.

Sherrick, 54, credits Davis with teaching him how to build boats.

Sherrick was a gifted carpenter and builder from a young age. He won national woodworking awards for his work in high school construction classes. He renovated his parents’ Maryland home when he was 15 years old. By 18 years of age, he started his own construction business building large homes of 10,000 square feet or more.

He decided against going to college so his parents gave him his college fund to buy shop equipment instead.

In just a couple of years, he wanted to do something different. In home building everything is flat, level and plumb and it became boring, he said.

He had heard of Buddy Davis building beautiful boats down in North Carolina. He called the plant in Elizabeth City, got an appointment for an interview and was hired in 1991.

Plugs have to be crafted precisely so the molds are exactly right. Sherrick honed his skills over the next nine years working with Davis Yachts working his way up to supervisor, assistant plant manager and plant manager. Davis moved his operation from Elizabeth City to Wanchese in the early 1990s.

Wanchese has been a boat building hub on the Outer Banks for more than a century going back to some of the early shad boats crafted by George Washington Creef. Several boat builders still operate there and in nearby communities constructing fishing vessels made for the waters off the Outer Banks that can travel miles offshore near the Gulf Stream.

Today, the Wanchese Marine Industrial Park is home to boat building companies and related industries on 30 lots within the 53-acre site.

Two of Sherrick’s employees work occasionally from a boatyard at the Wanchese park updating previously made Calyber boats. He employs a total of five including himself.

Sherrick left Davis Yachts in 2000 to start his own business in Kill Devil Hills.

Large boats take a year or two to build. Sherrick decided to build smaller vessels and produce more in a shorter time. He built the first boat under his own company - a 22-foot vessel with the Carolina flare.

When an admiring customer asked about the size, Sherrick told him it was a 22 caliber, in reference to the popular rifle that fires bullets of that size. Sherrick like the spontaneous name he had just created so he christened his company Calyber Boatworks.

He changed the spelling to include a y instead of an i for design purposes. His business logo extends the bottom leg of the y into a fishing hook.

He built boats in Kill Devil Hills for three years before business grew enough that he needed a bigger space. The closest place he could find with enough size was in Edenton. He moved his shop there in 2004.

Sherrick drove from his home in Grandy to Edenton for 10 years where he enhanced his reputation as a boat builder. He built semi-custom boats of 27 feet, 29 feet and 35 feet. Customers were part of the construction process through the build adding or modifying as they wanted. Boats from his Edenton shop are in use all over the world including in Japan, Italy and Australia.

He and his company appeared in many national publications such as Marlin Magazine, Southern Boating and Professional Boatbuilder over the years.

When the economy fell off around 2008, he branched into other products. He made F-16 jet simulator units of fiberglass for a while. He also made an 8-foot tall device that used a small solar panel and wind turbine to generate and measure power it produced. It would send the information to classrooms and help students learn more about renewable energy.

But Edenton was a long commute for a long time.

During his drives, he imagined a very small vessel that had the Carolina flare and sleek look of a large yacht. He began working from his garage after work, designing and crafting what he had in mind.

He finished the tiny, well-proportioned boat and called it the Calyber 12. It carries the nickname of Lil’ Buddy, in homage to the style of yachts built years ago by his mentor, Buddy Davis.

“Whoever saw it, wanted one,” he said. 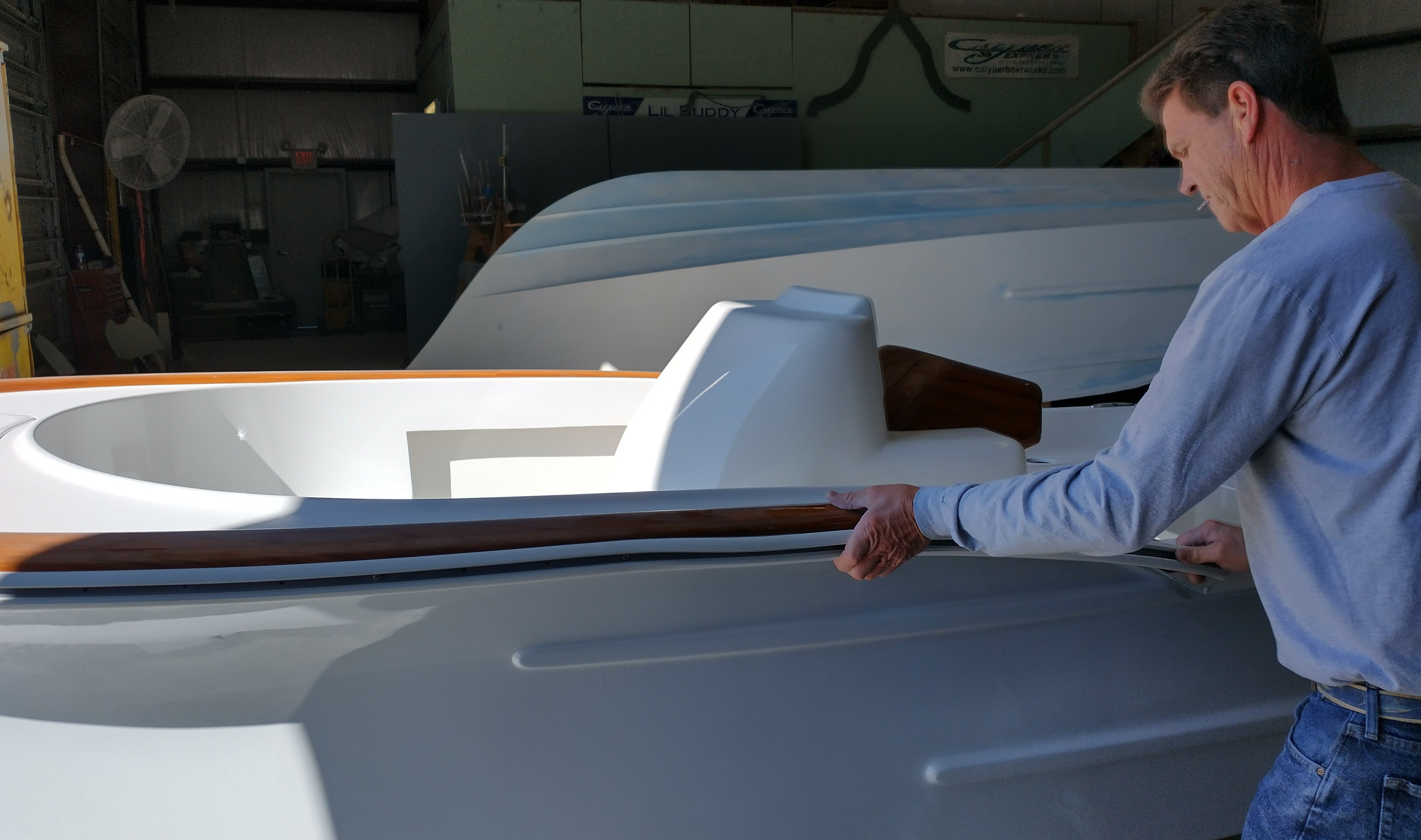 By 2013, Sherrick was looking to move closer to home and get into more production boats rather than custom-built. He found a warehouse in Powells Point that fit his needs.

He makes fiberglass hulls already formed with the flare and protruding guards by using molds that can be unbolted and spread open. Typically, fiberglass forms are pulled from one-piece molds and then have side guards and other features added.
The international supply line troubles are affecting Sherrick as much as anybody, he said. He ordered a motor for a 21-foot boat in April and just received it in early October delaying completion of the order by months.

He can typically build a 12-foot boat each month and four of the larger boats each year.

Always looking for something different, Sherrick has teamed with a company called Orion to construct boats with wheels. Calyber has the job of making compartments with hydraulic doors that cover the wheels so the boat maintains traditional lines while in the water.

These boats have two large tires on the front and two on the back that run on a hydraulic motor. The boat can drive right out of the water, onto the concrete launch and across the parking lot to the trailer. Or, the captain can drive across a beach and roll into the surf launching directly into the ocean. No need for an inlet. The boat can also emerge from the sea and drive onto a private island.

The design also allows for the boat to settle near the ground where the handicapped or the elderly can easily get aboard. The boat would have doors that open from the side.

The tires hydraulically contract into the compartments when the boat is underway in the water. Hydraulic bay doors close to conceal the tires.

These will be custom pleasure boats that operate like an amphibious craft. And it still has the Carolina flare.

Traditional and innovative at the same time.