Made in Currituck: Sawyer Decoy Co. 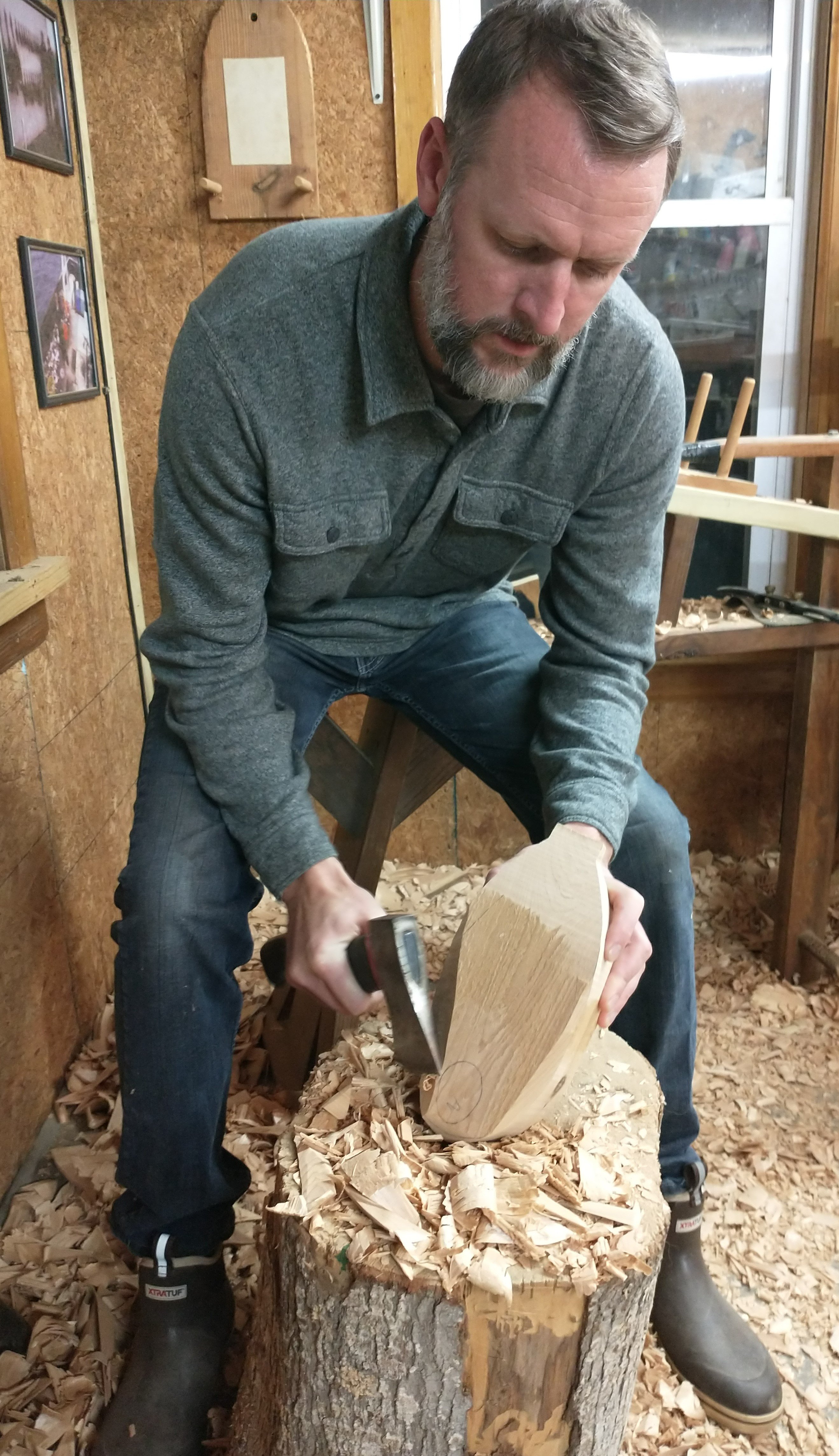 Chandler Sawyer chops on a piece of juniper as he shapes the body of a ruddy duck decoy.

Decoy carver Chandler Sawyer chopped deftly with his hatchet into a block of juniper, quickly shaping it into the rough form of a ruddy duck.

A pile of shavings littered the shop floor around him. The smell of juniper blended with that of the wood stove burning at the back of the room.

A couple of shotguns leaned against the wall. Several carved heads of ducks sat on one work bench. An assortment of oil paints and carving knives sat on another. Blocks of juniper in many sizes filled bushel baskets stacked nearby.

The shop itself dates from the 1880s when it was the outdoor kitchen to the 140-year-old home Sawyer and his family live in.

Sawyer, 40, carves decoys in the traditional Currituck County style using hand tools and an instinct bred into him from generations of duck hunters and carvers. His shop represents his heritage.

“I use simple, old-school patterns of the past,” Sawyer said.

These decoys are made for the hunt like his great great grandfather Bob Morse made them decades ago. A century-old crosscut saw owned by Morse hangs over the woodstove in Sawyer’s shop. Morse used the saw to cut juniper trees in the dense woods and swamps of Currituck County. Juniper is the wood of choice for decoys and the old hunting skiffs used on the sound. The relatively soft wood could endure the damp elements.

Sawyer’s carvings remain slightly rough on surface and without intricate feather details. The classic Currituck “paddle tails” are short and flat. He never paints the eyes.

“If a duck gets close enough to see the eyes, you’d better be shooting,” he said.

Sawyer makes 40 to 50 decoys a year that sell for about $350 each depending on the type. He’s made some 600 total since he began making them for sale after earning a degree at East Carolina University.

“It’s pretty cool to kill ducks over something you made,” he said. 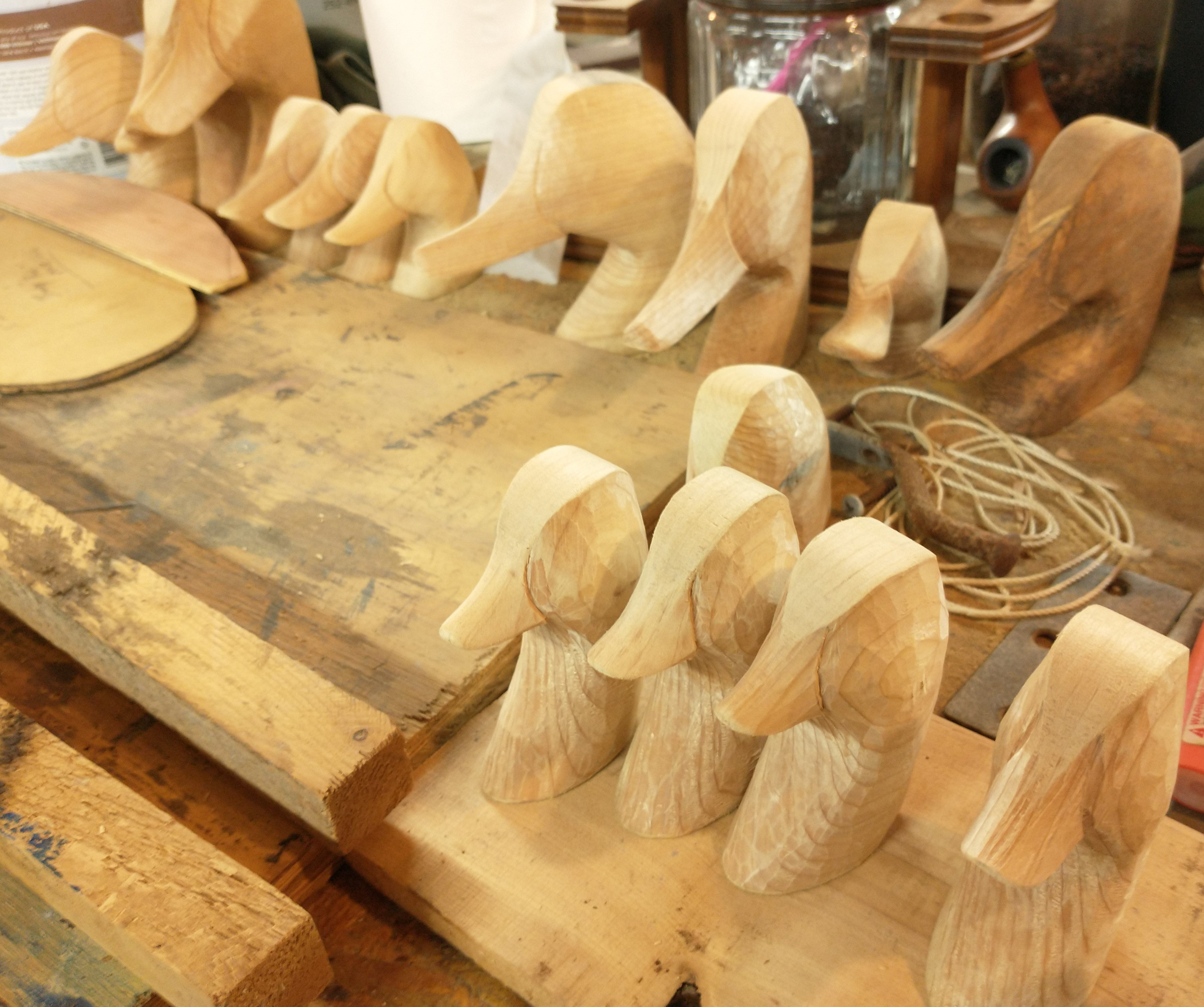 A row of carved duck heads are about ready to mount on decoy bodies.

Auctions held in Hyannis, Mass. in the late 1960s were the first dedicated to duck decoys. At an auction of the estate of  William J. Mackey, one duck decoy sold for $10,000, according to Invaluable, an online marketplace. By the 1980s, decoys were selling for more than $20,000.

Sawyer first began carving when he was 11 years old as he watched his grandfather, Milford Sawyer, make small carvings of animals and characters like Santa Claus in his garage workshop.

Sawyer tried his hand on a small bird dog, and in the process, stabbed himself in the leg where he still has a scar. He kept working at it until he finished it as he watched his grandfather carve.

“It wasn’t like a lot of instruction,” he said. “Here’s a knife and here’s a piece of wood.”

He still uses the original carving knife given him by his grandfather.

He made his first miniature decoy, a canvasback, when he was 12 years old and then progressed to making a full-sized version two years later.

He carved through high school and college mostly for his own pleasure. After college in 2004, he began working for the State of North Carolina as an educator at the Center for Wildlife Education in Corolla. He married Currituck County school teacher Jennifer Neal six months later.

He carved a large black duck that he realized was good enough for sale. He decided to make more and set up a booth at the 2005 Currituck Wildlife Show.

He came with about 30 decoys for sale for $40 or $50 each and anxiously sat in his booth that first Saturday morning unsure if they would sell.

He sold out during the two-day event. 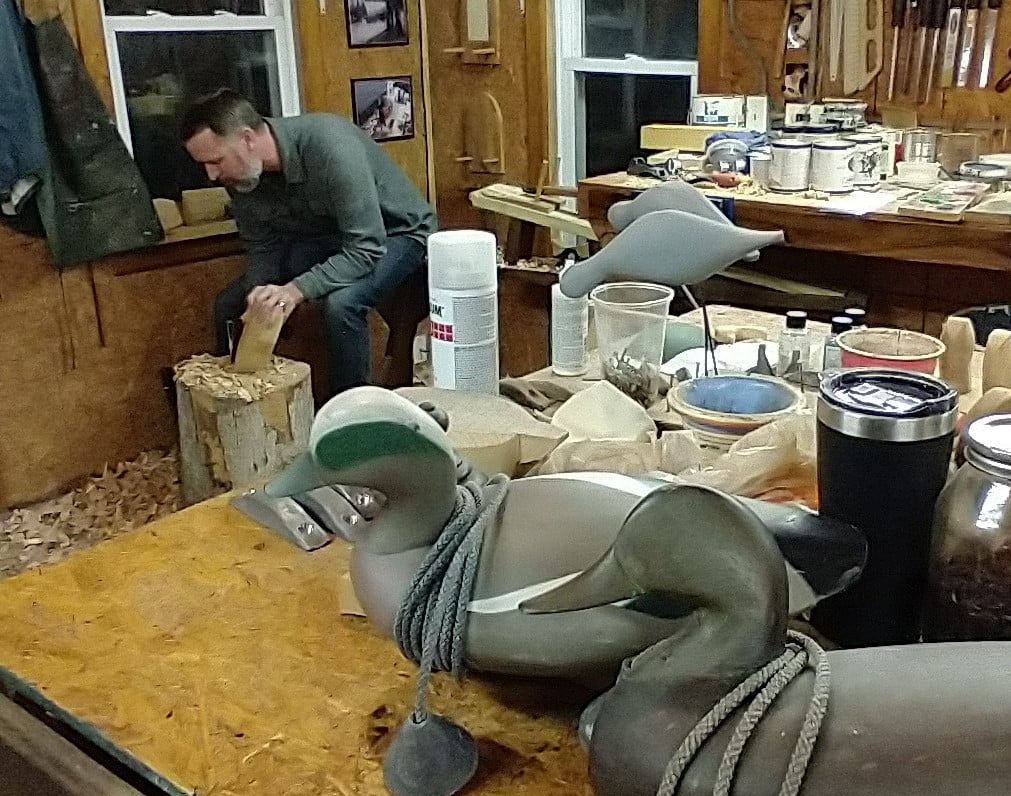 Sawyer uses a hatchet to begin carving away excess wood in the early stages of making a new decoy.

An entrepreneur aunt gave him advice afterward - raise the price.

He did and successfully carved and sold decoys for four to six shows a year for the next three years.

Meanwhile his daughter was born and he wanted to more time to be with his family. He was working full time and guiding hunters during duck season.

His carving reputation grew to the point he could make sales without having to constantly meet the grueling demands of  carving enough decoys for shows. He had been featured by then in news reports, magazines and television shows. Collectors knew about him and were buying his work. Customers were now coming to him.

Sawyer was a craftsman who not only knew woodworking but had long been a duck hunter and knew his subject well.

His grandfather, the late Travis Morris, had hunted ducks in the Currituck Sound since boyhood. He knew the sound, the waterfowl, boats and blinds. He wrote several books about waterfowl hunting and Currituck County.

Morris first took Sawyer duck hunting when he was five years old. Morris picked him up the evening before so they could spend the night on his 45-foot yacht docked in the Coinjock Canal, just two miles from the Piney Island Hunt Club.

Sawyer was bundled in layers against the cold and armed with a BB gun. He would graduate to a shotgun a couple of years later.

That first morning, he stood on a crate so he could see over the pine limbs placed around the blind for cover. When a duck landed among the decoys, he aimed and popped the duck with a BB. The duck only ruffled his feathers a little. During the day,  Morris and another adult relative killed three mallards, a black duck and a teal. Sawyer had to pick and clean them later, but that was ok, he was hooked on duck hunting.

“I knew this was something I was going to do for the rest of my life,” he said.

Morris kept taking him hunting. He had helped establish the Piney Island Hunt Club on Churches Island in the 1980s and was taking out paying hunting parties. Sawyer would come with him as an assistant guide. This club is different from the Pine Island Hunt Club established on the Currituck Outer Banks in 1910.

By age nine, he was so good at calling ducks experienced hunters wanted him along to bring them into shooting range.

Sawyer has never missed the opening day of duck hunting season on the Currituck Sound, no matter the class he was taking or the job he was working,

By age 14, he took his first hunting party out on his own. It was a nasty day, so they settled on a shore blind along Coinjock Bay not far from home instead of taking on the rough waves and hard winds on the open water.

They killed 14 mallards and the hunters were happy with their young guide. He has guided hunters ever since including for the Currituck Shooting Club, established in 1857 and the oldest waterfowl hunting club in America.

He left the Center for Wildlife Education and worked for the North Carolina Division of Marine Fisheries for a few years before becoming caretaker and guide for the Pine Island Hunt Club, a job he held for 10 years. He still guides for that club now on occasion.

Two years ago, he began working for Currituck County and is now manager of the Currituck Maritime Museum in Corolla.

The museum was established largely from the efforts of his grandfather, Morris, and county native Wilson Snowden. In the 1990s, the friends began collecting the aging boats used on the sound and preserved them in sheds on their property.

Those same boats are the centerpieces of the 10,000 square-foot museum. Among the exhibits are enlarged photos of his grandfather on one wall and one of Sawyer himself in the process of carving.

Sawyer often works on duck carving at the museum while admirers watch. 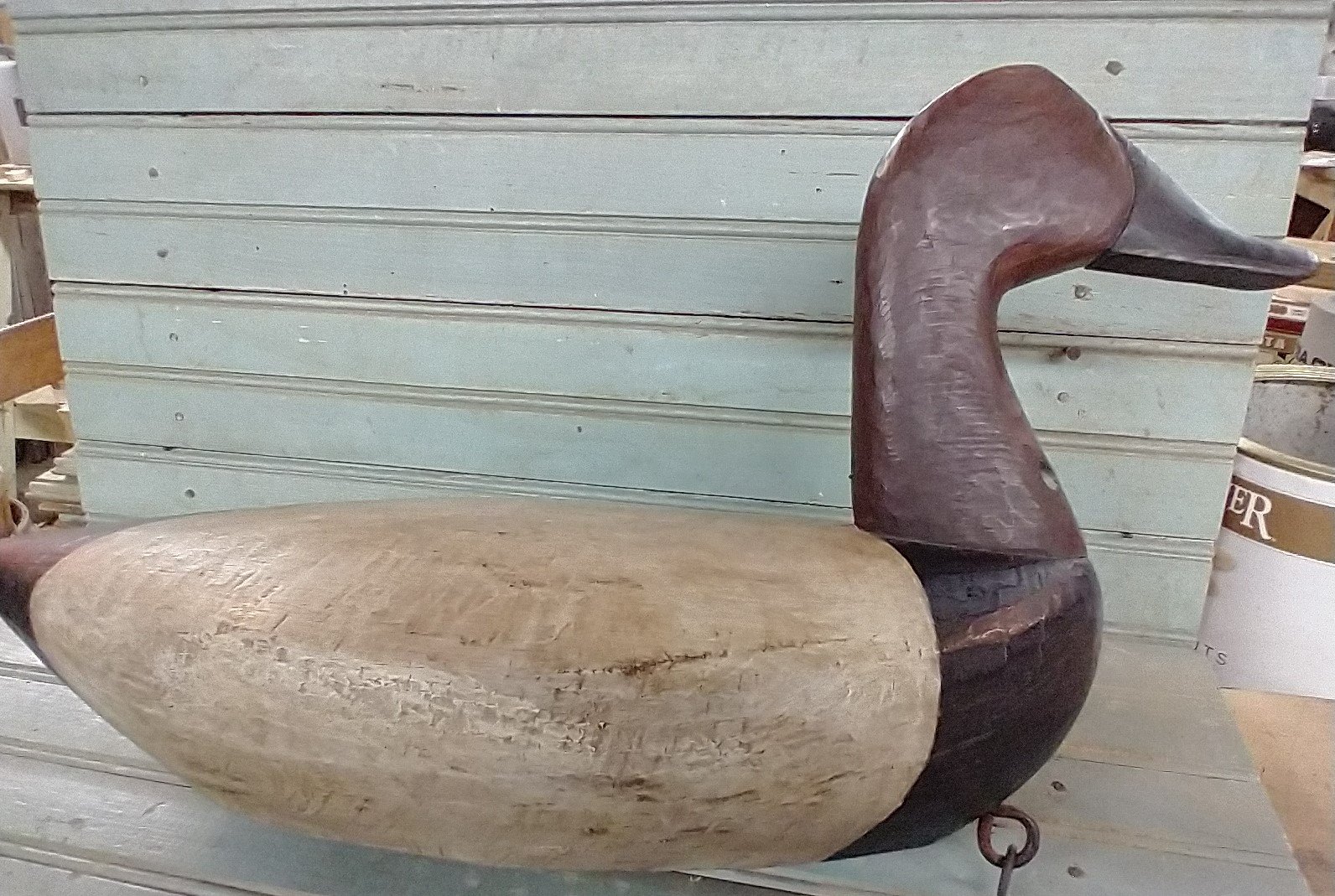 A canvasback decoy carved and painted by Chandler Sawyer.

Two years ago, Sawyer gave his carving business a name – “Sawyer Decoy Co. – established in 1714.” The year is a nod to his ancestors who came to the county centuries ago and were hunters and carvers.

A direct ancestor, Abraham Baum, owned Outer Banks land stretching from the Currituck Beach Lighthouse south to Dare County line, about 10 miles. Much of the land was eventually sold to wealthy northern industrialists who established hunting establishments such as the Currituck Shooting Club, the Lighthouse Club and the Pine Island Hunt Club.

Sawyer pays homage to those who taught him with photos hanging in his shop. He can see them as he carves.

He begins a decoy by drawing a pattern on a block of juniper and cutting it out on a band saw, the only power tool used in the process. He then chops excess wood with a hatchet on a chopping block made from the trunk of a maple tree. He shapes it further using a draw knife and then a spoke shave. He doesn’t sand it. The rougher surface is better.

He finished them by painting them in flat, but authentic colors, like his ancestors did.

Watch a video about Sawyer created by Currituck County Tourism...