What began more than 40 years ago as a small insulation business has grown into a demolition company able to take down a multi-story hotel, precisely remove parts of a school or extract a beached shipwreck.

By the time crews call it a job well done, the property lies vacant without so much as a brick, block or board remaining. Any sort of hazardous material is removed and disposed safely.

“Complex demolition is the culmination of years of experience,” said Richard “Ricky” Webb III, chief operating officer of East Coast Demolition. “Not everybody can do it.”

The Moyock company of 40 employees has completed more than 10,000 projects since its founding in 1981. At least 20 percent of the employees are women including company vice president Diane Drennan.

A fleet of more than 60 pieces of equipment including 15 excavators and 10 tractor trailers make quick work of aging buildings and expansive parking lots.

RELATED READ
Made in Currituck: Quality Machine and Fabrication

East Coast Demolition has taken on high-profile jobs in eastern North Carolina and in Hampton Roads.

Crews recently took down an annex building and cafeteria at Moyock Elementary School, all while students continued classes in the original historic building. They peeked from the windows of their classrooms as the work went on at a safe distance. Webb himself once looked out those same windows as a student years ago.

The kitchen attached to the cafeteria remained in place. The roof was carefully cut to separate the sections and a new wall protected the kitchen area from weather. It was a big job done with meticulous detail. When it was over, the kitchen and the historic schoolhouse sat untouched and the remaining grounds left vacant and ready.

The noise and disruption were minimal during the project, said Brandi Kelly, principal of Moyock Elementary School.

“It was such a smooth process,” she said. 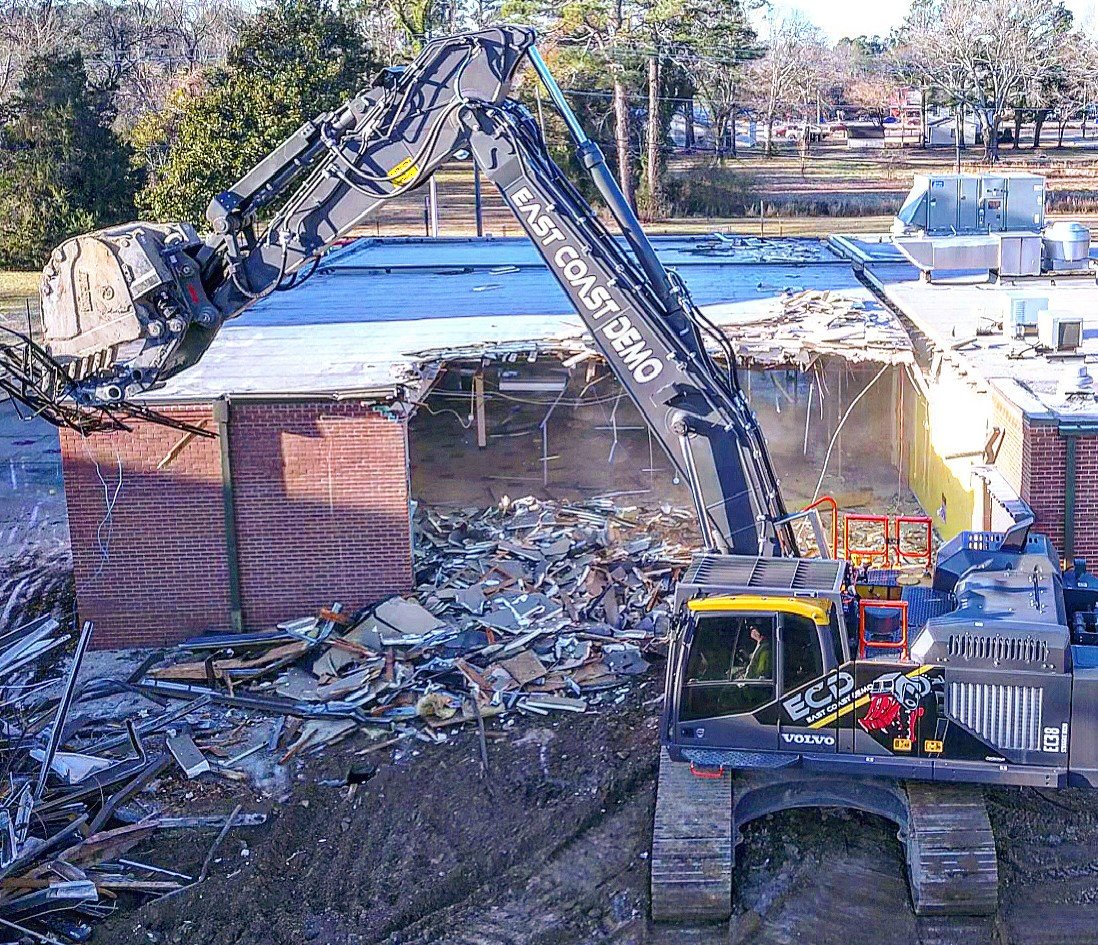 The original Moyock Elementary School was built in 1921, but burned down. It was rebuilt in 1941 using the same design and is one of the few examples of Classical Revival style left in Currituck County. It was essential to protect the vintage structure while tearing down the annex and cafeteria.

The county plans to build a new addition to the school including 16 classrooms for about $15 million.

The company took down parts of the Corolla wastewater plant including several steel and concrete storage tanks both above ground and in some cases up to 20 feet below the surface.

Workers started and finished the project during the tourist season on the Currituck Outer Banks where thousands of people pour into Corolla each summer. Traffic crawls along the two-lane N.C. 12 as the only main road through the area. The company completed the job without delays and without disruption to traffic or to visitors, Webb said.

A large excavator with massive cutting jaws attached to the boom rolled onto the Hatteras Island beaches near Oregon Inlet with the surf pounding nearby to cut in pieces the hull of the Ocean Pursuit.

East Coast Demolition was working under Cape Dredging, Inc. out of Buxton to remove the metal hull.

The trawler ran aground not far from Oregon Inlet in March 2020. Fuel and other hazardous wastes were removed quickly, but the vessel remained stuck on the shoreline. It soon became a tourist attraction and favorite spot for photographers. Snap shots posted online showed the trawler in front of a rising sun, under the stars of the night sky or as a backdrop for lunch at the beach.

But it was still a large, rusting chunk of metal sitting on some of the most isolated and pristine beaches on the Outer Banks. The sands of Hatteras Island are an important nesting area for shorebirds and sea turtles. The vessel had to go.

Officials with Cape Hatteras National Seashore attempted to get the owner to remove it, but it sat for months and gradually the sand began to swallow it. Eventually the National Park Service contracted for its removal in November 2021. The company had more humble beginnings in the 1970s.

Later it was discovered that many forms of insulation contained asbestos, a substance found to be a cause of cancer. Federal laws were passed preventing the use of asbestos in building materials and called for the removal of it from public facilities.

The Webbs had worked with asbestos in construction and were familiar with handling it. They were hired to extract and properly discard asbestos materials in many different uses which led to jobs removing a range of debris including old pipes insulated with asbestos and eventually entire buildings.

They improvised as they went, following the evolving federal laws and devising better ways of tearing down structures and safely disposing of the construction debris.

For example, asbestos is divided into categories of friable such as insulation and non-friable such as tile or roofing material. Friable asbestos is easily disturbed, can be crumbled by hand and released into the air. Each type of asbestos has to be handled differently.

His grandparents and his father, Richard Webb II, began accumulating more and more equipment for the various jobs and founded East Coast Demolition.

Webb began working with his father when he was about 12 years old mowing grass and washing equipment. As he got older, his work assignments became more complicated. He learned to use heavy equipment and how to estimate jobs for bidding.

He graduated from North Carolina State University in business management and economics. Meanwhile he continued working with the company during holidays and summer breaks.

As the years passed, he mastered the business side from his father and learned demolition techniques from being on the job and operating equipment, he said. 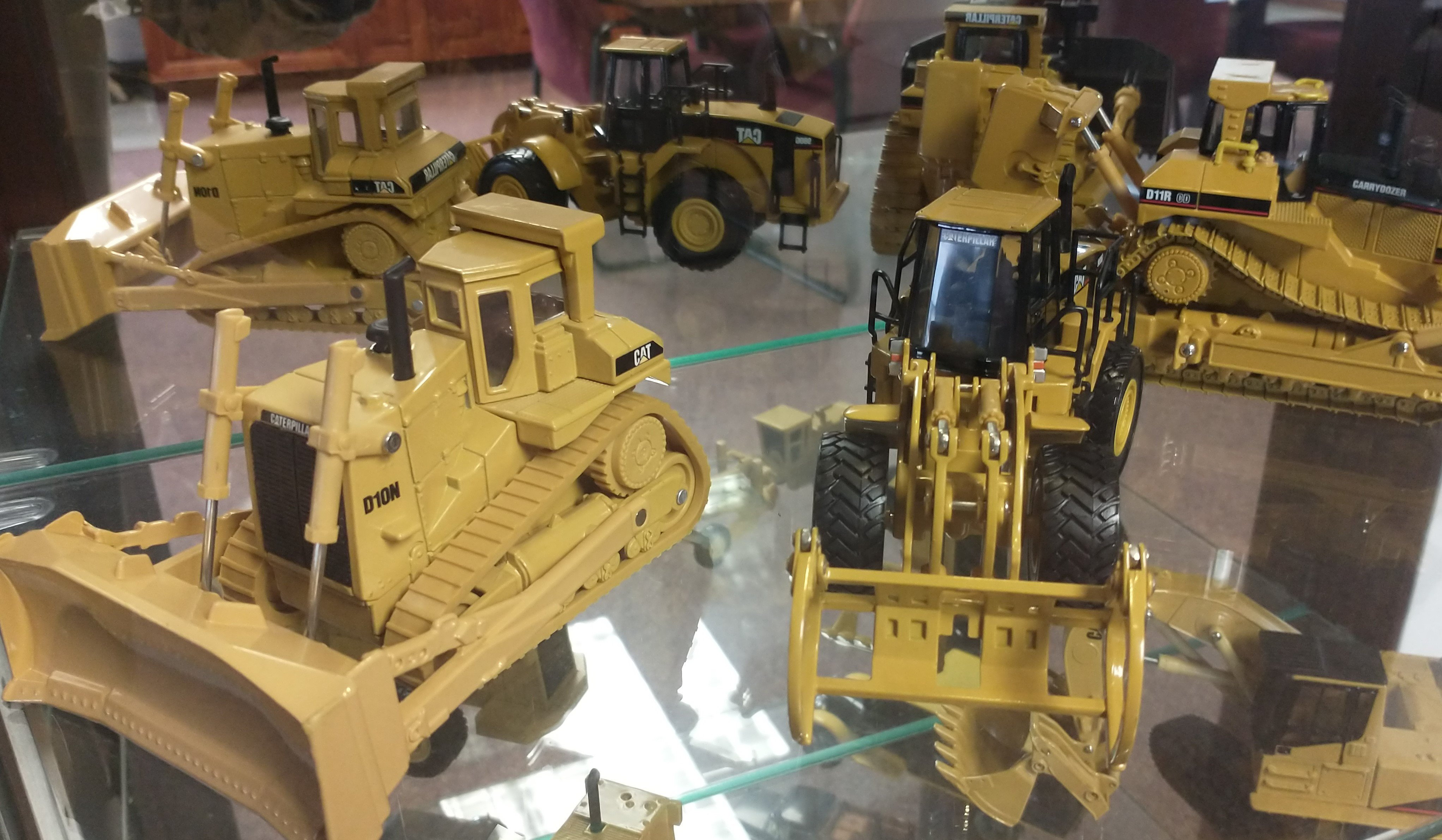 The work follows a pattern of demolition, sorting materials, loading them in trucks and hauling them away, and then, repeat, Webb said.

The 34-year-old married father of one describes the process as “valued engineered desconstruction.”

“That’s how we handle different kinds of waste types,” he said.

The company has a goal of recycling at least 90 percent of the salvaged materials.

Scrap metals such as copper, steel, aluminum and brass are sorted and sold to recycling facilities, Webb said. Functioning appliances are removed and used by the company at its own site or offered for sale to the public. Recovered interior and exterior store fronts, doors, electrical equipment, lighting for parking lots are all reused if possible. That means a lot less debris to the landfill.

The company preserves concrete, steel and soil removed from a job and haul them back to the company’s 18-acre headquarters and salvage yard. The materials are crushed and screened in clean, high-quality grades to be sold to the public.

The Webbs moved their headquarters from Chesapeake to Moyock in 2010 to where they already owned the large tract of land for storage.

Even the 8,000-square-foot modern-looking company office building started out as single-wide trailers from a project completed at the NASA Langley Research Center at Langley Air Force Base in Hampton, Va.

The trailers’ interiors were renovated, an enclosed breezeway was added and a stylish exterior was built around the complex.

Across the lot is a 9,000 square foot shop where mechanics, fabricators and welders repair equipment. The spacious work area is stocked with an assortment of tools, equipment and materials to make repairs on trucks, excavators, bull dozers and other equipment.

Some of the machines cost hundreds of thousands of dollars. The ability to keep them repaired properly and quickly in house is essential, Webb said.

In a large salvage yard nearby sit piles of rock, concrete and mulch removed, separated and cleaned from job sites.

The 15 excavators are made so that they can take on an assortment of attachments that can hammer through concrete, crush boulder sized blocks, cut through two-foot wide trees, mulch a small forest or grab and yank down pieces of multistory buildings. One excavator can reach up more than 10 stories.

The attachments can be changed out in a couple of minutes. Drivers sit in climate-controlled cabs protected from dust, heat and cold. For the sake of safety and protecting equipment, side and rear-view cameras pan all angles where the driver might move.

On most job sites, a large blower sprays a mist high in the air to help settle dust from the air during a demolition.

The investment means more overhead, but at the same time the company can complete any job relatively quickly and efficiently, he said.

“Our goal is to have everything we need to be efficient and successful,” Webb said.